The ACLU filed the complaint and asked President Biden's Department of Education and Department of Justice to command that the Central Bucks School District to better affirm and support its LGBTQ+ students. 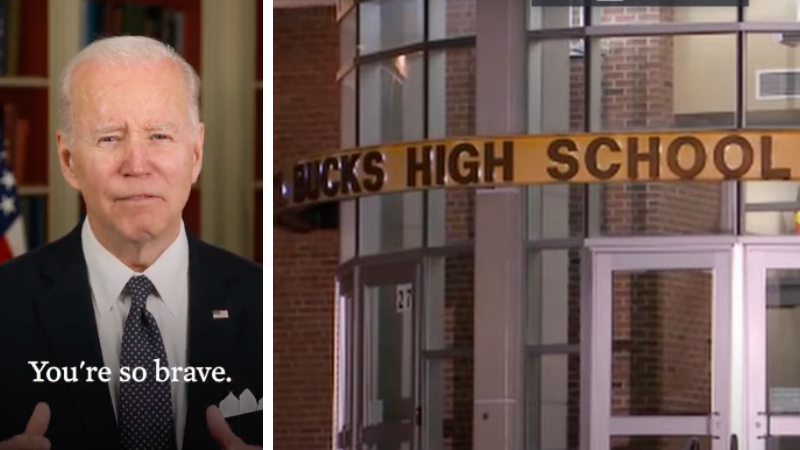 Joshua Young Youngsville North Carolina
Oct 6, 2022 minute read
ADVERTISEMENT
ADVERTISEMENT
The American Civil Liberties Union filed a federal complaint on Thursday against the Central Bucks School District (CBSD) in Pennsylvania saying that they've created a "hostile environment" for "LGBTQ+ students" by requiring students to get their parents' permission before insisting everyone in class call them by a different name and set of pronouns.

According to the Philadelphia Inquirer, the ACLU filed the complaint and asked President Biden's Department of Education and Department of Justice to command that CBSD better affirm and support its LGBTQ+ students, one example being to use the child's preferred pronouns. Current CBSD policy requires parental permission before a teacher would use a different pronoun than the one that corresponds to the student's biological sex.

According to the Bucks County Herald, two schools in CBSD, Pennsylvania's fourth-largest school district, began implementing a "gender identification procedure" in late September that "instructed teachers not to recognize a student’s request to be called a different name than is listed in the district’s database without a parent’s approval."

An anonymous teacher told the Herald they were not following the directive and said, "I’m not aware of one teacher abiding by it."

Legal Director at the ACLU of Pennsylvania Witold Walczak said, "a new school board majority and the administration have exacerbated the problems with new homophobic and transphobic policies that have heightened the climate of fear for this group of students and supportive staff."

Thehe 71-page complaint focused on students who identify as transgender in the wake of the "gender identification procedure" and it also included other incidents of "bullying," an example of which they gave as teacher's removing pride flags from classrooms.

In May, CBSD removed pride flags from classrooms, and Abe Lucabaugh, Superintendent of Schools, wrote in a statement, "These flags have taken on a contentiousness that is pulling our focus away from the support and belonging our students deserve, and they are dividing our community at a time that calls for healing."

Another example the ACLU cited of "bullying" is when a teacher was forced to move an in-school health class to a digital format because a student who identifies as non-binary wanted to join a girls' only version of the class.

According to Lucabaugh, the issue was" "a curriculum that is taught in 4th through 6th grades that focuses on the anatomy and physiology of male and female bodies." The class was moved digital in an effort to be "inclusive."

In another example the ACLU noted an alleged incident of a middle school teacher being suspended because they defended LGBTQ+ students. However, Lucabaugh noted that was not the case and that "the insinuation that our district would single out a teacher and take disciplinary action because the teacher supports LGBTQIA+ students is defamatory."

In his statement, Lucabaugh noted that the teacher in question was put on leave for "personnel matters" and that there is a process for reporting and investigating "potentially harmful events and situations."

Lucabaugh also wrote that several days of "chaos" ensued after the teachers suspension that was continued by non-CBSD community members encouraging protest and conflict amongst middle schoolers.

Finally, the ACLU mentioned that the majority-Republican Central Bucks school board was engaging in harm by removing certain books from school libraries.