The Brooke Owens Fellowship is only available to candidates who are "a cisgender woman, a transgender woman, non-binary, agender, bigender, two-spirit, demigender, genderfluid, genderqueer, or another form of gender minority." The application adds, "If you are a cisgender man, this program isn’t for you." 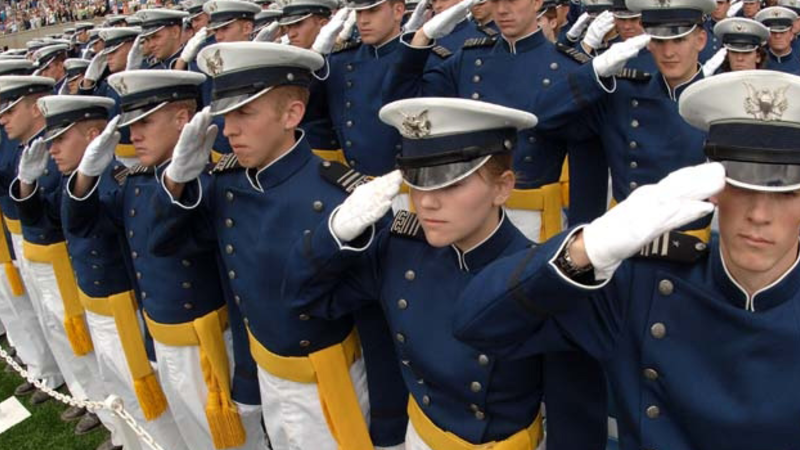 As Fox News reports, the Brooke Owens Fellowship is only available to candidates from the Air Force who are "a cisgender woman, a transgender woman, non-binary, agender, bigender, two-spirit, demigender, genderfluid, genderqueer, or another form of gender minority." The application adds, "If you are a cisgender man, this program isn’t for you."

The academy, which is located in Colorado, said the 2023 Brooke Owens Fellowship application deadline was October 10 and that it is a "nine-week paid internship at a leading aerospace company."

Fox News was alerted to the program from a cadet who wrote, "It's a little worrying that we have more briefs about D&I (diversity and inclusion) than briefs about foreign adversaries, emerging technologies or current events across the world."

The cadet's revelation comes after reports that the Air Force Academy has implemented diversity trainings that include telling cadets to use gender-neutral language and drop the word "colorblind."

In a slideshow titled, "Diversity & Inclusion: What it is, why we care, & what we can do," the school tells its Air Force cadets to use "person-centered" and gender-neutral language when describing people.

"Person-centered" language tells cadets to format their speech around the individual, so, "transgender people/service members" instead of "transgenders," and "people with disabilities," instead of "the disabled." Similarly, it instructs against saying "I don’t see color," but that someone is "Color Conscious."

In another slide, the presentation claimed that diversity and inclusion training is a critical factor in "developing warfighters."

There is also a "Cadet Wing Diversity and Inclusion Program' at the Air Force Academy where a special purple robe is given to candidates to mark them for "symbolizing their position as a diversity representative."

Representative Mike Waltz of Florida, a Green Beret and Afghan War veteran, said "we're instructing every cadet entering the Air Force to not say 'mom' and 'dad,' to not say 'boyfriend' or 'girlfriend,' and this kind of drive towards gender neutrality, I think the Air Force should be worried about the macro aggressions against America that are happening all over the world."

In June, the official Twitter account for US Air Force Recruiting posted a photo of several cadets briskly but breathlessly walking while one in back held the LGBT pride flag.

In March 2022 the Air Force celebrated 'transgender day of visibility' and as The Post Millennial reported, "cited President Biden's initiatives as a reason that they believe gender identity is part of their purview." The trend continued into April when the Air Force promised to create a 'safe space' for cadets to 'share perspectives.'
ADVERTISEMENT
ADVERTISEMENT
US Air Force Academy cadets