Journalist Andy Ngo has threatened to sue far-left rioter John Sullivan who falsely accused Ngo of storming the Capitol building on Jan. 6 and then fleeing the country to "avoid prosecution." The alleged photographic evidence that Sullivan pointed to pictures another Asian man. 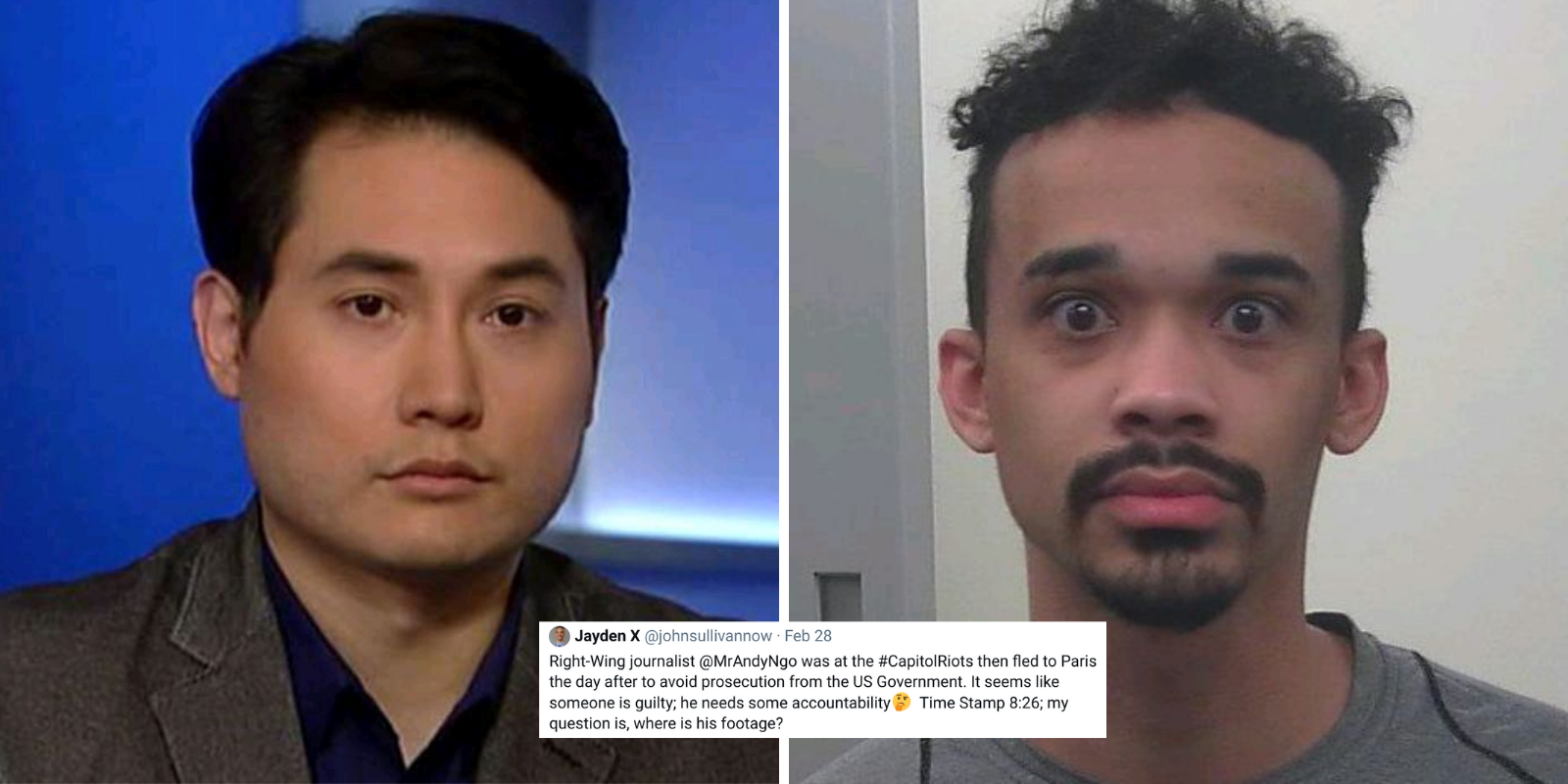 Journalist Andy Ngo has threatened to sue far-left rioter John Sullivan who falsely accused Ngo of storming the Capitol building on Jan. 6 and then fleeing the country to "avoid prosecution." The alleged photographic evidence that Sullivan pointed to pictures another Asian man.

Ngo's legal counsel, the law firm of outspoken attorney Harmeet Dhillon, has ordered Sullivan to cease and desist his defamation of her client. Dhillon's letter sent Friday addresses the falsity of Sullivan's recent defamatory statements blasted across Twitter and further penned on his personal webpage.

On Feb. 28, Sullivan alleged on social media that Ngo was part of the pro-Trump mob that had breached federal property in January. Sullivan claimed in the article published on his site that Ngo had then fled abroad to "avoid prosecution" from the federal government out of "fear of being found connected with the riot" due to his "direct involvement in the insurrection." He accused Ngo of "aiding and abetting his fellow compatriots" and hiding his footage to protect "himself and many violent rebels seeking to linch Congress members."

Sullivan went on to contend that as "cover-up," Ngo had suggested that Antifa and Black Lives Matter militants "dressed up as Trumpets" to infiltrate the pro-Trump mob, thus constructing this "deception from the reality of the situation to save his brothers in arms from being imprisoned for their horrendous acts of violence."

On the day of the siege, however, Ngo had even dismissed conspiracy theories that Antifa was behind the operation. "The people occupying the Capitol building do not look like antifa people dressed in Trump gear or Trump costumes," Ngo, in England, said to the Washington Examiner. Ngo was skeptical that Antifa operatives could have coordinated such an infiltration on this mass scale before "without any of that information leaking out."

In the memo, Dhillon called Sullivan's claims last Sunday "baseless and made with knowledge they were false" or at least with "reckless disregard for whether your statements were false." Dhillon emphasized that Sullivan's "sole support" for these "outrageous claims" is an assertion that he had witnessed an Asian man among the Capitol Hill rioters. "You extrapolated this sighting of an Asian male" into this "preposterous assumption," she wrote to Sullivan.

Sullivan had identified the Asian man captured at the 8:26 mark of his 50-minute continuous YouTube video as Ngo: "Andy stood in front of me the entire time during the insurrection with his tan hood pulled up over his black baseball cap, wearing clear goggles and a black and grey camo face covering."

In multiple tweets, Sullivan continued to draw the false comparison by uploading an old 2017 image of Ngo during his Portland State University days positioned next to an image of the unknown Asian man. "You blithely claimed that this photograph depicted Mr. Ngo at the riots, despite clear differences in facial features and style of eyeglasses," Dhillon fired back. "You offered no other proof that Mr. Ngo was present at the January 6, 2021, incident."

Dhillon noted how numerous Twitter users had even exposed Sullivan's false defamatory statements. In response to these comments, Sullivan posted a GIF of former President Donald Trump shrugging, "I don't care," with the hashtag "#antifaandy," displaying his awareness yet negligence.

Dhillon argued that the "unreasonable and racist reasoning" behind Sullivan's claims shows that he had no factual basis at all. Even after the digital confrontations, Sullivan failed to retract any of his defamatory declarations and reacted by later re-endorsing these false statements "with actual malice" and "reckless disregard for their truth," negating any argument that Sullivan has to "the public-figure privilege," Dhillon countered.

The Post Millennial had reached out to Sullivan to inquire about what evidence he has to support these unsubstantiated claims other than the surface-level observation that the subject in question photographed in his footage is Asian.

Sullivan said that his naming Ngo relies on "several other people validating this assumption." Sullivan then clarified to The Post Millennial that his allegations are "based on observation of the video and past videos of [Ngo]."

"I was not there and the person in this photo is not me," commented Ngo at the time before Sullivan's incendiary account was suspended by Twitter admins.

Dhillon reiterated that Ngo was not in the United States on Jan. 6. Ngo had announced that he was forced to flee to the United Kingdom following months of death threats from Antifa terrorists and visits to his family's residence. "My hometown of Portland, Oregon, is the epicenter of American Antifa," Ngo told Sky News Australia in his Jan. 23 interview.

TRIGGERnometry co-host Konstantin Kisin had confirmed with The Post Millennial that Ngo was indeed overseas with him and his colleague, fellow comedian Francis Foster, on the day of the Washington attack. Ngo's appearance on the London-based free speech podcast later premiered Jan. 27.

Ngo ordered Sullivan to remove all related defamatory remarks, issue an apology on any forum where the falsehoods were posted, and refrain from future false accusations. To avoid litigation, Sullivan must respond to the notice by March 12 to indicate that he will comply with the listed demands, Dhillon instructed.

He has not responded to The Post Millennial's latest request, asking if Sullivan will retract his statements, apologize to Ngo, and respond by Friday's deadline.

Sullivan, the founder of Utah-based extremist group Insurgence USA, himself is facing multiple criminal charges by federal authorities for his alleged involvement in the Capitol Hill riot. There are recorded examples of the 26-year-old agitating the right-wing crowd. When radical individuals climbed the wall to reach the plaza just outside the Capitol building's entrance, Sullivan can be heard shouting on-camera: "You guys are f—ing savage. Let's go!"

"We did this together. F— yeah! We are all a part of this history," Sullivan shouted in video evidence cited by federal prosecutors. "Let's burn this shit down."

An FBI special agent had found via sworn affidavit that Sullivan even admitted that he does not possess press credentials. The federal investigation, in fact, did not yield "any connection between Sullivan and any journalistic organizations."

Sullivan and his defense lawyer still maintain that the Utah native was in the nation's capital to "document and report" the event for journalistic purposes, not to incite or engage in violence. A federal magistrate judge overseeing his case ruled last month that Sullivan can continue to use social media platforms, but that he must distance himself from Insurgence USA. At the hearing related to Sullivan's release conditions, his internet usage was ordered to be monitored by probation officials while he remains under home detention awaiting possible trial.

In his March 4 live stream on YouTube, Sullivan stressed that the online ban against him has been lifted. "I do not have any restrictions on social media. I don't have restrictions as far as being able to travel outside of my house. I can go wherever I want to go," Sullivan told his viewers, detailing how he can travel anywhere beyond his home state but cannot enter Washington, D.C.

"I'm not denying that I'm an activist as well," Sullivan said in addition to his self-professed reporter title. "I have my activism and I've been doing activism as well."

He claimed that the majority of Black Lives Matter demonstrations are peaceful. Sullivan still insisted in the video that he "didn't commit any crimes" and that the federal charges levelled against him feed into this "false narrative."

His troubled past has spawned speculations across the political spectrum about the self-styled social justice activist's true motives. Sullivan's left-wing peers consider him an agent provocateur and opportunistic grifter who has embedded himself in the Pacific Northwest protest community. He has since been blackballed due to his reckless behavior.

BLM's Utah chapter leader Lex Scott declared to Fox News that the organization does "not want to be associated" with Sullivan at all. "He needs to stop pretending he is part of this movement here," she countered.