"Absolutely not. Not even close," Sen. Kelly said when the reporter asked if he thought that Democrats nationally recognize the complexity of the border issue and the frustrations Americans have with it. 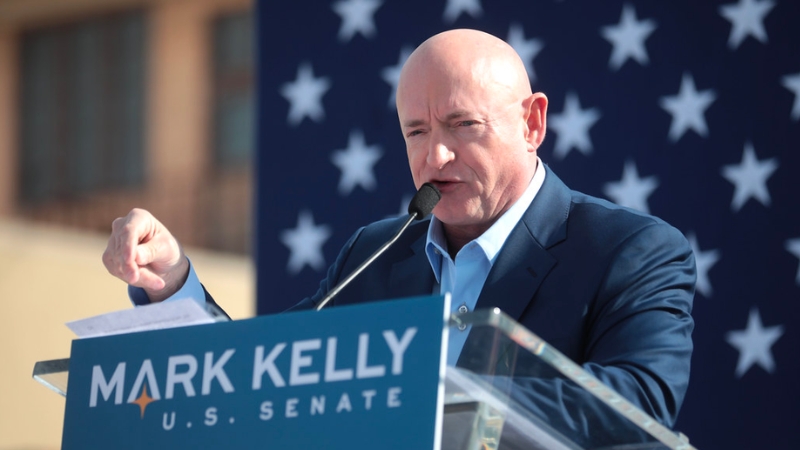 Olivia Rondeau
Nov 23, 2022 minute read
ADVERTISEMENT
ADVERTISEMENT
Newly re-elected Arizona Democrat Sen. Mark Kelly on Tuesday slammed his own party "who don't understand" the crisis at the southern border, and argued that "our country would really benefit from stronger border security," and other immigration reforms.

Kelly was recently elected to serve a full six-year senate term after serving two years as a result of a special election following the death of Sen. John McCain and a grueling midterm election race against Trump-endorsed Republican Blake Masters, who's campaign heavily focused on voter's border security fears.

Speaking with Karen Tumulty of The Washington Post, the senator expressed his frustration with the Democratic Party's handling of border concerns.

"What do you think are the lessons for other Democrats going forward, especially when it comes to what it takes to win in hard places," Tumulty asked.

Kelly replied with his own experience, saying that he "didn't ignore different places of the state," and "talked to everybody about things that matter to them."

"When you're running for the United States Senate or any statewide office, you've got to go and talk to everybody and talk to them about things they care about, whether it's the cost of gasoline or, especially in Southern Arizona, about the border, which is a crisis," he continued.

"You can't ignore that in Arizona. It's been chaos down there at times, for decades. So don't run away from the issues," he said to his fellow Democrats.

The reporter then asked Kelly if he thought that Democrats nationally recognize the complexity of the border issue and the frustrations Americans have with it.

"Absolutely not. Not even close," he said. He then went on to describe the problematic approach that both parties have taken, and stressed the need to reach across the aisle to work with Republicans on border security and immigration reform.

"When I first got to Washington, it didn't take me long to realize that there are a lot of Democrats who don't understand our southern border and a lot of Republicans who just want to talk about it, don't necessarily want to do anything about it, just want to use it politically," he said. "So my approach has been — to the extent that we could and can — to make progress on securing it, but also doing it in a way that's in accordance with our ethics and our values, not to demonize people."

"And I continue to talk to my Republican colleagues about how we have to do more," he continued.

"We have to do more in border security. We have to do more in comprehensive immigration reform, especially 'dreamers,' but also these visa programs. If you're a farmer, especially in Southern Arizona, despite having a ready supply of eager workers, you don't have the visas available and it's a problem for them. But when I talk to my Republican colleagues who are not anywhere near a border — let's say they're in Mississippi, Alabama, Tennessee — they have the same problem."

"So there are solutions and we're continuing to work on this. Our country would really benefit from stronger border security and comprehensive immigration reform," he added.

With several southern states along with Democrat-run sanctuary jurisdictions reporting being overwhelmed by the number of illegal migrants in recent months, the Biden administration along with the left-wig party in general have been widely criticized for not doing enough. Under Biden's watch, the US has seen a record number of illegal migrants showing up at the US-Mexico border.
ADVERTISEMENT
ADVERTISEMENT
mark kelly