Barr said Biden "lied to the America people" about the laptop, and that the then-presidential candidate "suggested that it was Russian disinformation." 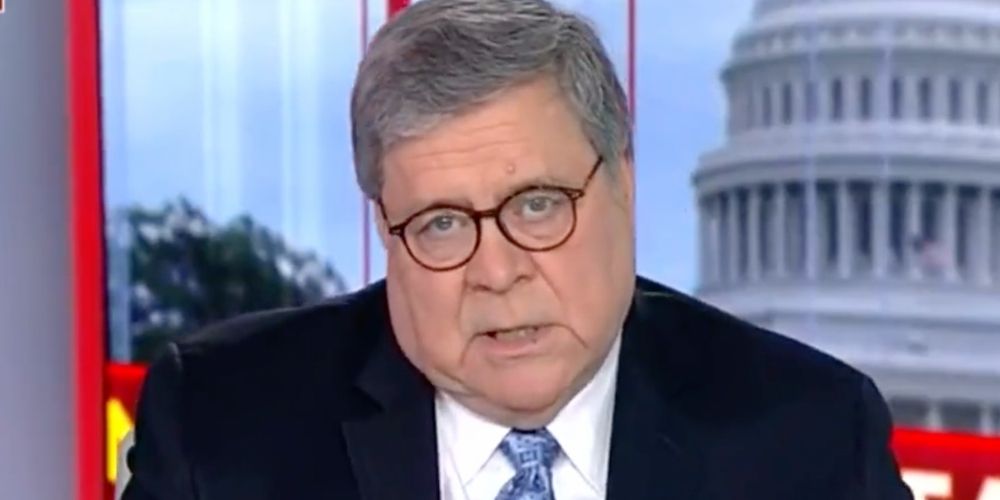 In a Fox News interview Monday, former US Attorney General Bill Barr said that President Joe Biden "lied to the American people" about Hunter Biden's infamous laptop from hell during a 2020 presidential debate, in which he referred to the exposure of emails found on the laptop as "a Russian plant."

Speaking with "America Reports," Barr said he was "shocked" and "very disturbed" by Biden's comments made during an October 2020 presidential debate.

"I was very disturbed during the debate when candidate Biden lied to the American people about the laptop," Barr said during Monday's appearance on Fox News.

"He's squarely confronted with the laptop, and he suggested that it was Russian disinformation and pointed to the letter written by some intelligence people that was baseless — which he knew was a lie," Barr said. "And I was shocked by that."

Barr noted during Monday's interview that the presence of the laptop and its suppression could be an example of "interference in an election," but added that he wouldn't want to "venture an opinion" on whether Biden has "legal liability" for his role in the laptop controversy. When asked whether the White House has a "problem" here, in reference to the sensational laptop story, Barr said:

"Well, I think now that you know, from a political standpoint, now that this is in people's consciousness, it had been suppressed up till now. Obviously they they have a hot potato and just to see how they handle it will be interesting."

Barr's comments Monday come as the Hunter Biden laptop story came back into the national headlines after The New York Times, which previously discredited the bombshell story, said that the emails in question have been authenticated by sources familiar with the matter and with the federal probe into his taxes.

During the Oct. 22, 2020, debate, Trump called it "the laptop from hell" and suggested that emails recovered implicated Biden as "a corrupt politician."

Biden denied the laptop's legitimacy and said "there are 50 former national intelligence folks who said that what this, he's accusing me of, is a Russian plant." he added, "They have said that this has all the characteristics — four, five former heads of the CIA, both parties — say what he's saying is a bunch of garbage."

A number of ex-intelligence officials who reviewed Hunter Biden's laptop in the lead-up to the 2020 presidential election and dismissed its authenticity as "Russian information" declined to comment and apologize to the New York Post.

The New York Post reported that only five of 51 former intelligence officials stood by their Oct. 19, 2020, public statement. The outlet said that five others declined to comment, 39 signers didn't respond, and two couldn't be contacted.

When a laptop containing sensitive information and evidence of questionable business dealings was recovered by a computer repair shop in Delaware, Hunter Biden quickly became the center of a polarizing media tug-of-war.