During Thursday's Medal of Honor ceremony, a White House military aide mistakenly announced a recipient for posthumous decoration who is still alive. 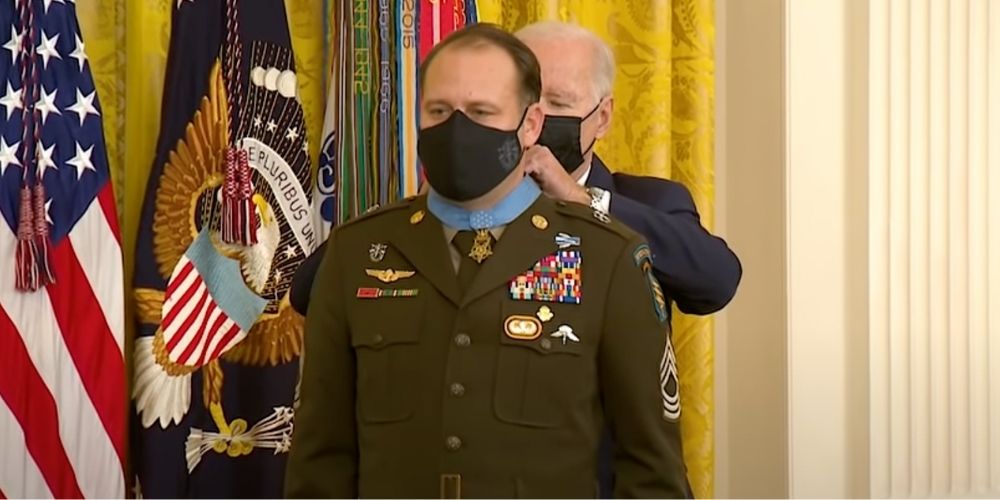 During Thursday's Medal of Honor ceremony, a White House military aide mistakenly announced a recipient for posthumous decoration who is still alive.

"Attention to orders," read military aide to the president Marine Lt. Col. William Kerrigan. "The president of the United States of America, authorized by act of Congress March 3, 1863, has posthumously awarded in the name of Congress the Medal of Honor to Staff Sgt. Earl D. Plumlee, United States Army, for conspicuous gallantry at the risk of his life and above and beyond the call of duty."

While the citation was read out, Plumlee stood at attention beside President Joe Biden, who then placed the medal around Plumlee's neck.

It is unclear whether the mixup came from Kerrigan misspeaking, or if the mistake was included in the document itself.

Plumlee was awarded the honors for his actions on Aug. 28, 2013, working as a Special Forces solider in Afghanistan.

Plumlee and five other soldiers drove two vehicles to the site of an explosion on the perimeter of a US base, where they fought off Taliban suicide bombers.

Armed with a pistol, Plumlee shielded a driver with his body while exiting the vehicle, killed two insurgents, and engaged in multiple others. While under fire, he carried a wounded soldier to safety and administered first aid. Despite injuries, Plumlee later joined American and Polish forces in a counterattack.

Biden said Plumlee's honor "has been too long in coming" and vowed "no one will ever forget how you sprang into action when the enemy attacked our base."

According to the New York Post: "Cashe was awarded the Medal of Honor for repeatedly entering a burning vehicle while under attack by enemy small arms fire to save his fellow soldiers in 2005 during the Iraq War, sacrificing his life to do so. Celiz was posthumously honored for voluntarily exposing himself to enemy fire in Afghanistan in 2018 to retrieve a heavy weapons system, lead a medical evacuation and shield his wounded teammates."