This comes after the White House walked back remarks Biden made about regime change in Russia, chemical weapons use, and US troop deployments to Ukraine. 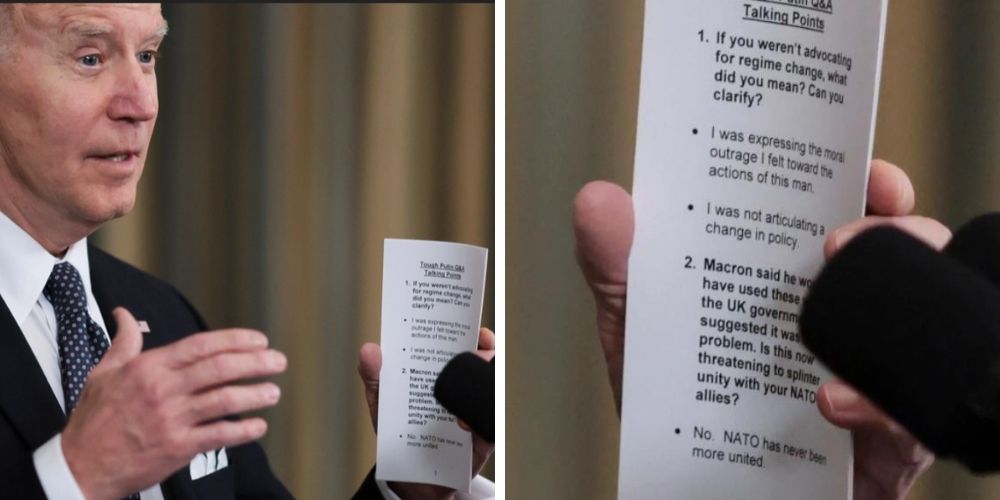 President Joe Biden reviewed talking points during a press conference Monday where he took questions from reporters about the administration's views and plans for US engagement in Russia's war on Ukraine. The notes were titled "Tough Putin Q&A Talking Points."

This comes after the White House walked back remarks Biden made indicating that the US would be seeking regime change in Russia, would respond "in kind" were Russia to use chemical weapons, and that US troops would be stationed or deployed in Ukraine.

Biden was asked about these three statements, each of which the White House walked back. He said both that there was nothing to walk back, and that no one thought he was saying that the US would be seeking to overthrow Russian President Vladimir Putin but that he was speaking from his own emotional standpoint.

Among his notes was a statement that Biden was "not articulating a change in policy" when he stated that Putin should not be in charge of Russia. The press conference was about Biden's new budget proposal, though the vast majority of reporters' questions were about the confusing remarks Biden had made in Europe last week.

"I want to make it clear I wasn't then, nor am I now, articulating a policy change. I was expressing moral outrage that I feel," Biden said, remarking that he makes "no apologies" for his personal feelings on the matter.

"It's more an aspiration than anything. He shouldn't be in power… people like this shouldn't be ruling countries, but they do. The fact is they do, but it doesn't mean I can’t express my outrage about it," Biden said.

One of the notes said that Biden should clarify his comment about Putin comment and say, "I was expressing the moral outrage I felt toward the actions of this man."

Biden often uses notes during press conferences, and also did so while campaigning. These have included notes on which reporters to call on, showing headshots and names, as he held during his first presidential press conference.