"As long as it takes, so Russia cannot, in fact, defeat Ukraine and move beyond Ukraine," Biden responded. 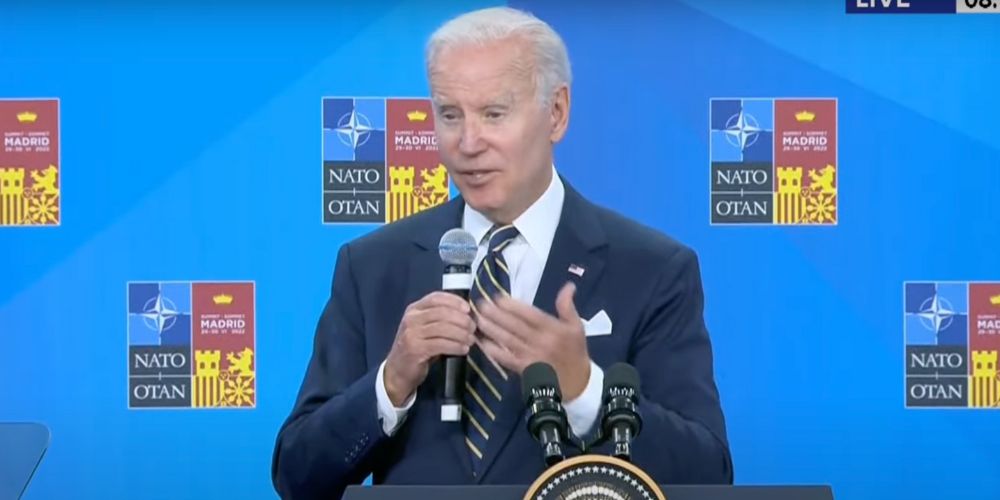 During a press conference on Thursday at the NATO Leadership summit in Spain, President Joe Biden declared that Americans should expect to pay higher gas prices for "as long as it takes" to defeat Russian President Vladimir Putin in Ukraine.

In response to a reporter asking, "how long is it fair to expect American drivers and drivers around the world to pay that premium for this war?" Biden responded that Americans, who have been paying nearly $5 a gallon for gas for months, should shell out the extra cash for "as long as it takes" because Americans paying more helps Ukraine fight Russia.

"As long as it takes, so Russia cannot, in fact, defeat Ukraine and move beyond Ukraine," Biden responded.

"Ultimately, the reason why gas prices are up is because of Russia, Russia, Russia" Biden said, according to the Daily Mail, invoking his "Putin's Price Hike" supposition. Biden has touting the statement since March to little relief for his historically low poll numbers.

"The reason why the food crisis exists is because of Russia - Russia not allowing the grain to get out of Ukraine." Biden incorrectly invoked the war in Ukraine as a significant contributing factor to the supply chain crisis, which began in 2021 due to his mishandling of COVID-19.

While Putin's invasion of Ukraine exacerbated the calamities facing America, the public continues to hold the Biden administration accountable for the nation's woes.

Biden has called Congress to declare a national holiday from the gas tax for the summer and has released some oil from America's strategic reserve, but both measures are predicted to do little to offset the consistently high and rising prices.

Despite these recent measures, Biden has said he's going to seize the opportunity to push America to more green energy and has closed pipelines which were bringing the much needed resource into the US.

Fox News reported that Biden is set to ask Saudi Arabian ruler Crown Prince Mohammed bin Salman for oil in a move that has sparked criticism given America's shutting down of oil production.

In a contradictory moment, Biden said he wasn't "gonna ask to him" to release more oil to America, but then said "I hope we see them in their own interest concluding that makes sense to do" and "I've indicated to them that I thought they should be increasing oil production generically."

In response to a later question regarding polls that state in the US is moving in the wrong direction, Biden said, "You haven't found one person, one world leader to say America is going backwards." Earlier in June, Chase CEO Jaime Dimon predicted the accumulative effect of current economic policy in America will lead to a catastrophe likened unto a "hurricane."