The protest reportedly shut down the area for around two hours on one of the last shopping days before Christmas. 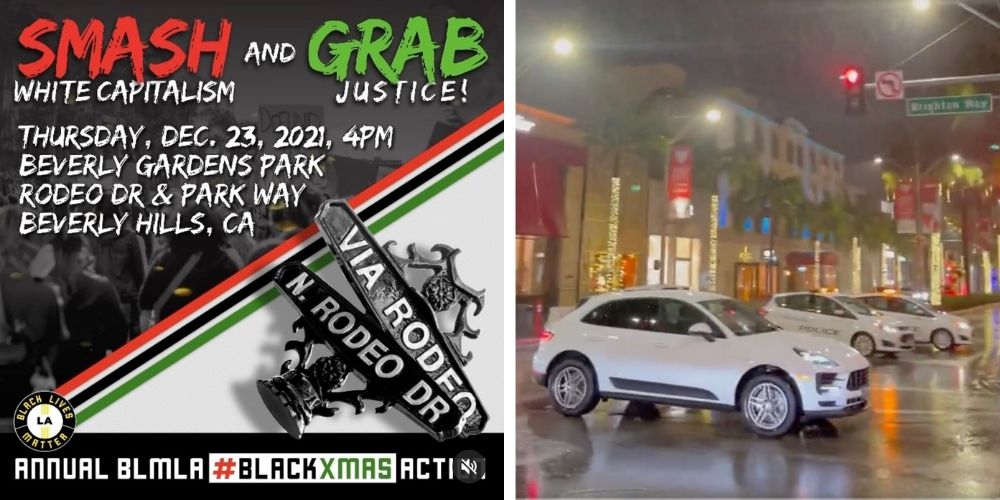 The protest reportedly shut down the area for around two hours on one of the last shopping days before Christmas, according to MSN. Video was shared to Twitter by @factswithfiona.

The gathering was dubbed the "Smash White Capitalism and Grab Justice" protest, with BLM LA stating on their Instagram page: "It's a different kind of 'smash and grab!'"

The protest began at Beverly Gardens Park at 4 pm, with organizers saying that the demonstration was a commentary on how capitalism is historically linked to violence against bodies of color, according to MSN.

"Today is a smash and grab. It is a different kind of smash and grab — don't nobody go and grab Gucci purses, ok? We are smashing white capitalism and we are grabbing some justice. We are smashing and grabbing in the name of our people — we know that every year, the reason we do this is because our people are killed by white capitalism," said Melina Abdullah, co-founder of the Black Lives Matter Los Angeles chapter.

Around 60 protestors made their way down Rodeo Drive at around 5:20 pm through the rain, chanting "Black lives, we matter," "Whose streets? Our streets" and "What do we want? Justice! When do we want it? Now!"

Protestors sung Christmas Carols with a twist, like "Deck the Streets," "Hark the Fighting People Sing" and "Trump's Nuts Roasting on an Open Fire."

After stopping in a few stores to sing and disrupt business, store workers began locking the protestors out.

Protestors stopped at three intersections along the route, and were met with honking cars.

The protest came as part of BLM's "Black Xmas" celebration, where organizers urge people to shop at only black businesses during the holidays.

"We know white capitalism utilizes police violence to steal the lives of our people so that they can make a profit. So every year we celebrate Black Xmas to disrupt white supremacist patriarchal heteronormative capitalism," Abdullah said.

During the summer of outrage in 2020, when protests were a near daily occurrence, BLM activists claimed that looting and theft are "reparations."