"When Prime Time 99 wins, the whole game is gonna change! These kids, their test scores are garbage. Prime Time 99 is gonna fix that. I'm coming in like a pimp on a blimp." 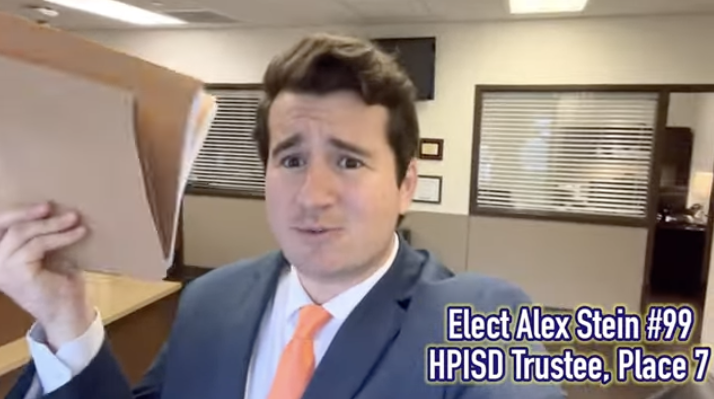 "I’m about to totally shake things up at my alma maters school district," Stein told The Post Millennial. Stein's campaign will be self-financed and he will not be accepting donations.

"I'm Prime Time 99 Alex Stein," he says to a receptionist before being redirected to a next-door annex building. Stein recorded himself submitting his application.

"I'm here to pick up my application for school board," he tells a woman in the next building. He is running for Highland Park Independent School District Trustee, Place 7, from which the current trustee is retiring. So far no one else has tossed their hat into the ring to fill that place. The deadline is February 17.

"I'm gonna have no mercy," Stein tells viewers as he picks up the forms to file his candidacy. "I'm gonna take no prisoners, Highland Park Independent School District. When Prime Time 99 wins, the whole game is gonna change! These kids, their test scores are garbage. Prime Time 99 is gonna fix that.

"I'm coming in like a pimp on a blimp. So all you parents out there, if y'all think I'm playing, you wait, we'll see who's really playing. Prime Time 99, pimp on a blimp baby, let's go! We're gonna help these kids unlike some of these other people."

The Post Millennial caught up to Stein on the campaign trail to find out why he's interested in running for school board.

"Highland Park, the district I grew up in, has become very woke," Stein said. "They hired a transgender elementary school teacher to teach art at Hyer Elementary School with no background check. Parents did their own background check on day 3 of the school year and found she had a social media site filled with deranged child deviant art and the District didn’t alert the community and have tried to cover it up."

Many school districts across the country have been essentially infiltrated with gender identity activist educators, who believe it is their mission to break down children's barriers and make them more accepting of alternative sexual lifestyles and gender identities. Some school districts have brought in drag queens, to host Drag Queen Story Hours where grown men dressed in garish "woman" costumes read to children about "trans kids."

In Bucks County, Penn., educators were so incensed that they were not allowed to display signs or flags denoting their own political affiliation inside their classrooms that they staged a Pride march where they all carried rainbow flags.

In Maine, school board members were recalled after endorsing a policy wherein educators should keep students' gender identity secret from parents. Florida Governor Ron DeSantis in 2022 made the unprecedented move of endorsing school board candidates for office. Most of them went on to win their elections.

Gay bar Mr. Misster, near Highland Park, hosted a drag show for families in June that saw armed, militant guards out in force to protect the performers and audience from protestors who objected to exposing children to sexualized performances that have traditionally been entirely for adults. Stein was among the protesters at the event.

Meanwhile, Texas has a teacher retention problem. Governor Greg Abbott formed a task force to figure out why teachers are leaving the profession, and professors, say that there's just not enough funding to keep high-quality teachers on the payroll.

Education experts, however, do note that the politicization of education, with the intensive focus on critical race and gender theory, has created additional problems for teachers.

"Bradfield and Hyer elementary are also having an LGBTQPLUS her/she speak as an author of a required read for all students that is listed as a Gender/Diversity book," Stein said. "So I want to stand up against the forced gender ideology of our elementary schools and help students focus on a curriculum that actually benefits them in their young adult life and doesn’t just feed them to the college industrial complex."

He brought his concerns to the school board in 2022, telling them how disappointing it was to see the decline in the school district, and the lengths to which Highland Park goes to "groom children" in gender identity. "You guys are not willing to stand up," he told the school board at the time.

Stein has been outspoken about the child exploitation allegations concerning the high-fashion brand Balenciaga and has spoken at universities about his concerns with gender identity indoctrination by educators of American youth. One event at Penn State was shut down as students were too triggered to even allow him to speak.