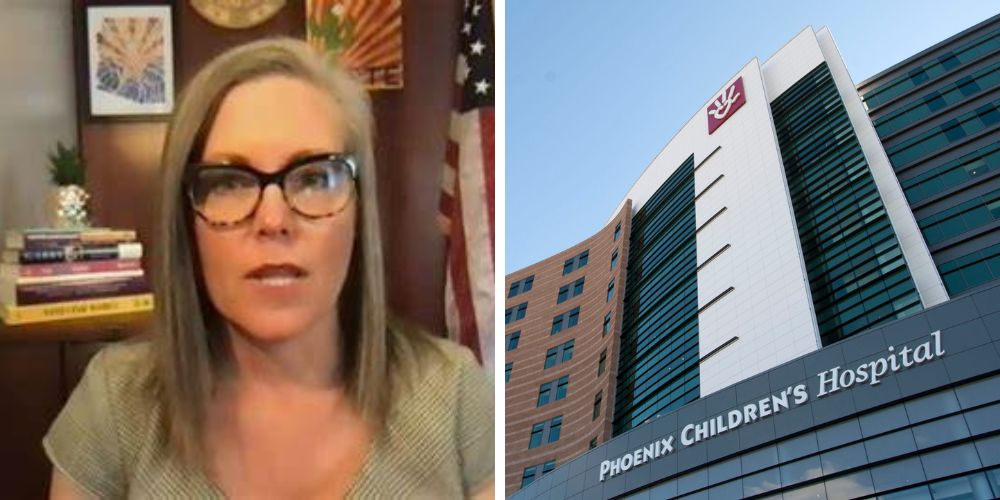 The Post Millennial
Nov 3, 2022 minute read
ADVERTISEMENT
ADVERTISEMENT
The child psychiatrist husband of Arizona Democratic gubernatorial candidate Katie Hobbs was named in a lawsuit brought against the state by the parents of a 10-year-old transgender child in 2020, according to a bombshell new report.

According to The Daily Wire, Hobbs’ husband Patrick Goodman is a psychiatrist at Phoenix Children’s Hospital and specializes “in serving youth and families affected by trauma and grief.”

Documents obtained by the outlet list Goodman as a provider in the hospital’s “gender support program” serving “gender diverse” and transgender youth.

The hospital’s website states that Goodman takes a gender-affirming approach to the treatment of children diagnosed with gender dysphoria or who identify as a sex different from their biological sex.

The hospital was indirectly involved in a lawsuit brought against Arizona on behalf of three transgender children in 2020 when the children’s guardians sued the state to change the birth certificate of each child to reflect the gender they now identified as, rather than their sex at birth. People are allowed to change their birth certificates in Arizona only after undergoing a sex change operation.

Goodman was named as a therapist to a 10-year-old trans-identified girl involved in the lawsuit, identified in court documents only as Jane Doe.

The documents obtained by the outlet stated that Goodman was identified as a potential witness in the case and was expected to testify regarding the child’s treatment in relation to Jane Doe’s request for a preliminary injunction to force the state to change the child’s birth certificate before the start of the school year.

According to court documents, Goodman’s patient began “expressing” as a girl at “two-and-a-half years old.”

“Jane’s parents initially thought this was a phase, but Jane persisted. Eventually, they brought her to a child psychologist specializing in care for young children with some prior experience with transgender youth, Dr. Beth Onufrak. Dr. Onufrak evaluated Jane over several sessions and concluded that Jane would meet the diagnostic criteria for gender dysphoria.”

The court filing stated, “Patrick Goodman is a therapist at Phoenix Children’s Hospital and Jane Doe’s mental health provider. He is expected to testify regarding his mental health treatment of Jane Doe’s gender dysphoria and opinion regarding Jane’s health and well-being absent injunctive relief.” The case is still ongoing and it is unclear if Goodman has testified yet.

According to court documents obtained by the Daily Wire, before Doe began second grade, Doe’s parents requested that the school allow their child to attend as a girl, which the institution agreed to, however, the child was bullied and teased. After several years, Doe’s parents attempted to enroll their child in a new school, but the new institution would not “…enroll Jane as female without a corrected birth certificate.”

Due to Doe’s age, the parents did not seek medical treatment and under the legislation that Ducey signed into law this year, Doe cannot legally have sex-reassignment surgery until 18.

According to the lawsuit, “Without a corrected birth certificate, Jane will be required to reveal that she is transgender to this new school. That will prevent her from safely moving to another school where she is free from pervasive harassment and bullying that prevent her from learning and cause her further significant emotional harm. Jane’s parents seek to correct the sex listed on Jane’s birth certificate so that she can enroll in a new school before having to return in person to her current school but are prevented from doing so because of Arizona’s surgical requirement.”