Twitter suspended LOTT for "hateful conduct" after it implicated National Children's Hospital of performing hysterectomies on 16-year-olds for the purpose of treating gender dysphoria. 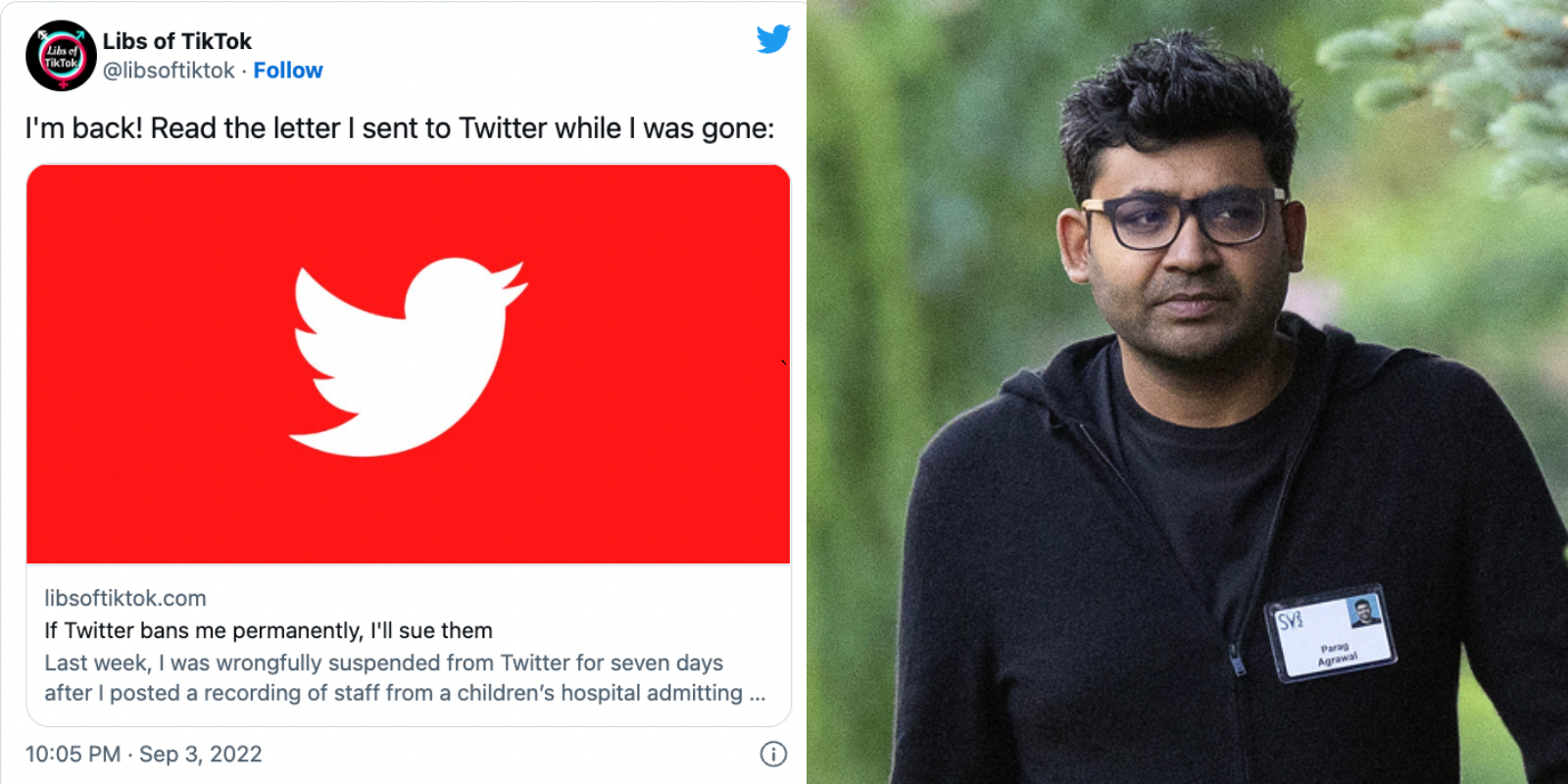 After Libs of TikTok was reinstated to Twitter after being suspended twice, the account stated that, if they were banned permanently, they would file suit against Twitter. This after it was revealed in June that Twitter employees were debating suspending the account—which simply reveals people in their own words—altogether.

Twitter had suspended the account for what they termed "hateful conduct" and violating the "hateful conduct policy" after Libs of TikTok founder Chaya Raichik posted an article, complete with audio of phone recordings, implicating National Children's Hospital in Washington, DC of performing hysterectomies on healthy, 16-year-old girls, for the purpose of treating gender dysphoria.

Mainstream media claimed these surgeries never happened, but it was uncovered by The Post Millennial, through research into scientific journals, that it's a far more widespread practice than WaPo, NPR, and hospital public relations people would have the public believe. This is one of the revelations that Libs of TikTok was prevented from posting due to the suspension.

In the letter to Twitter from Libs of TikTok's attorney, they attest that "LOTT did not violate your company’s hateful conduct policy. By wrongfully suspending LOTT, Twitter violated its contract with our client."

"Our client primarily re-publishes content publicly available on other social media pages and platforms," they attorney's write, "in which users outline their views in their own words. Much of LOTT’s work has focused on airing the perspectives of people in influential positions, particularly educators in public schools. LOTT’s reporting has shown many of these educators expressing contempt for the perspectives of the taxpayers who pay their salaries, benefits, and pension plans."

Twitter deemed the conduct "hateful," while mainstream media outlets such as NPR and the Washington Post attempted to debunk the assertions. National Children's Hospital claimed that the employees Raichik spoke to via phone were misinformed. These outlets did not dig further into the allegations made to discover for themselves if the hospital does remove the reproductive systems of healthy female teens, instead they cried to Twitter that Libs of TikTok should be banned—and Twitter, at least temporarily, complied.

Notable crybully Taylor Lorenz, who had previously doxxed Libs of TikTok (then said she didn't) along with her WaPo colleague Peter Jamison, told Twitter outright that the account should be banned. They then engaged in continued defamation of Libs of TikTok, saying that Raichik posted tweets "targeting" hospitals. They ran cover for the hospitals, while attacking a woman who exposed them.

Lorenz is now going further, and trying to get the account banned across Substack and Shopify as well. Substack's CEO, however, has made a commitment to free speech.

"After gaining a large Twitter following in the spring as she baselessly accused LGBTQ teachers of being pedophiles and 'groomers,' Raichik began criticizing children’s health facilities earlier this summer, targeting a hospital in Omaha in June and another in Pittsburgh in August. The attacks resulted in a flood of online harassment and phoned-in threats at both hospitals. Next came threats against children’s hospitals in Boston and Washington, D.C., after Raichik posted tweets targeting them," writes Lorenz, Jamison and Elizabeth Dwoskin.

Only WaPo has got their information all wrong. Libs of TikTik didn't "baselessly accuse LGBTQ teachers" of anything. Raichik simply shared to Twitter videos that she found on TikTok where teachers and educators declared to keep students' gender identity secret from parents, or spoke of their plans to "come out" to their students, or discussed how they would force their pre-schoolers to declare their pronouns. Readers and followers realized quickly that this was behavior designed to "groom" children into gender identity.

"Twitter suspended LOTT in violation of its own hateful conduct policy," the attorneys on behalf of Libs of TikTok wrote to Twitter. "Notably, in the suspension notice, Twitter gave a specific reason, and it did not invoke the language in your company’s Terms of Service that allow it to terminate accounts 'for any or no reason.' Certainly, in Twitter’s communications with the press regarding the suspension, your company did not cite that language, but rather announced 'it had taken enforcement action against the account for ‘hateful conduct’."

Libs of TikTok was one of many Twitter accounts and journalistic outlets to realize that medical "gender affirmation" or "gender confirmation" was happening at children's hospitals across the country. Boston Children's Hospital was exposed for performing double mastectomies on healthy 15-year-old girls for the purpose of treating gender dysphoria, and many, many plastic surgeons in the US will do this.

Information available on Boston Children's Hospital's website showed that they are willing to perform vaginoplasty on 17-year-old boys for the purpose of treating gender dysphoria. This procedure permanently renders the boys penis non functional, by inverting it and turning it into a cavity, then reshaping the flesh to give it the appearance of a female vagina. The criticism leveled at Boston Children's Hospital is that boys aged 17 may not be fully aware of what they are giving up by giving up the ability to reproduce or have a functional sex life.

Boston Children's Hospital said that they didn't do this. But their website said that they did. WaPo believed the administrators and the public relations people. Libs of TikTok, along with Chris Elston, this outlet, and others like NBC, believed what Boston Children's Hospital said after the fact instead of video and literature prior to the expose and questioning from major outlets.

Last week, Boston Children's Hospital reportedly received a bomb threat, which was later revealed by the Boston Police Department to have been a hoax. Boston PD will not release any further information about who phoned in the threat, and a request for 911 tapes elicited a response that these, if they exist, would also not be released.

WaPo baselessly blamed Raichik for the alleged threats at Boston, and other children's hospitals that perform these kinds of surgeries on children. Knowing that Libs of TikTok was the likely target of the harassment against hospitals, Babylon Bee CEO Seth Dillon, who works with Libs of TikTok, offered a $20,000 reward for information leading to the identity of the person or persons who called in the fake bomb threat to Boston Children's Hospital. Another CEO jumped aboard to match the reward, bringing the amount to $40,000.

Libs of TikTok's Chaya Raichik wrote in Human Events that "Mainstream media isn't mad about gender surgeries on teens, they're mad you found out." Twitter, WaPo, NPR, NBC and others aren't looking into the hospitals themselves, or trying to uncover harms done to kids and teens for the purposes of medical gender transition, but instead seeking to blast the journalist who is working to expose it.