"So yes, he can serve on a committee but he will not serve on Intel, because it goes to the national security of America, and I will always put them first," McCarthy said of Schiff. 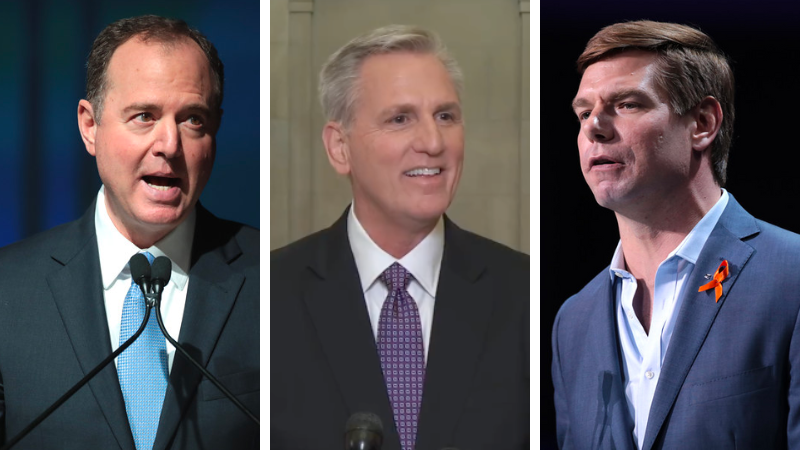 Schiff's tweet was in response to a letter McCarthy had issued to Minority Leader Hakeem Jeffries, confirming that the two men would not be allowed to continue on the committee in the 118th congress. When asked by a reporter as to why he removed Schiff and Swalwell, he was clear that both men were not qualified to be on that committee due to their past actions.

"What did Adam Schiff do as the chairman of the Intel Committee? What Adam Schiff did: use his power as a chairman and lied to the American public, even the inspector general said it.

"When Devin Nunez put out a memo, he said it was false," McCarthy said. It was recently revealed in the Twitter Files that Schiff fought to suppress a memo put out by then-Congressman Devin Nunes in 2018 which said that the Steele Dossier, which was a fabrication that was used as the foundation to impeach President Trump, was false.

Rep. Adam Schiff, claimed that Nunes allegations about the Steele Dossier, and that the claims Trump colluded with Russia were fake, were a product of a Russian disinformation campaign. It was later shown that Hillary Clinton and those associated with her campaign had essentially faked the dossier that led to Trump's first impeachment.

Even once it was proved to be fake, Schiff stuck with the claims made in the Steele Dossier. Later, he worked to suppress the Hunter Biden laptop, which revealed Biden family influence peddling and shady overseas business dealings involving then Vice President Biden.

"When we had a laptop," McCarthy continued to the reporter, "he used it before an election to be politics and say that it was false and said it was the Russians when he knew different, when he knew the Intel. If you talk to John Ratcliffe, DNI, he came out ahead of time and says there's no Intel to prove that.

"And he used his position as chairman, knowing he has information the rest of America does not, and lied to the American public. When a whistleblower came forward. He said that he did not know the individual even though his staff had met with him and set it up. So no, he does not have a right to sit on that.

"But I will not be like Democrats and play politics with these, where they removed Republicans from committees and all committees. So yes, he can serve on a committee but he will not serve on Intel, because it goes to the national security of America, and I will always put them first," McCarthy said before moving on to Swalwell.

"And if you want to talk about Swalwell, let's talk about Swalwell, because you have not had the briefing that I had. I had the briefing and Nancy Pelosi had the briefing from the FBI. The FBI never came before this Congress to tell the leadership of this Congress that Eric Swalwell had a problem with a Chinese spy until he served on Intel. So it wasn't just us who were concerned about him. The FBI was concerned about putting a member of Congress on the Intel Committee, that has the rights to see things that others don't, because of his knowledge and relationship with a Chinese spy."

"I cannot put partisan loyalty ahead of national security," McCarthy told Jeffries in the letter, who had asked the Speaker to allow the men to continue on the committee, " and I cannot simply recognize years of service as the sole criteria for membership on this essential committee. Integrity matters more."

McCarthy believes that Schiff and Swalwell had misused their position during the last two congressional terms, and said that in no uncertain terms.

"It is my assessment that the misuse of this panel diring the 116th and 117th Congresses severely undermined its primary national security and oversight missions—ultimately leaving our nation less safe."

Earlier in January, McCarthy promised to oust Schiff, Swalwell, and Ilham Omar from their committees. "It's not like it's anything new. Remember, this is what Nancy Pelosi – this is the type of Congress she wanted to have," McCarthy said at the time.

Pelosi had stripped Georgia's Marjorie Taylor Greene from her committees, as well as Paul Gosar of Arizona. She also refused to seat Jim Banks and Jim Jordan on the January 6th Committee, despite McCarthy having appointed them to it. This led to a strike of the committee by all GOP except for Liz Cheney and Adam Kinzinger, both of whom are no longer in Congress.

"Swalwell can't get a security clearance in the private sector. I'm not going to give him a government security clearance," McCarthy said. "Schiff has lied too many times to the American public. He should not be on Intel."