This comes a day after an Ontario judge ordered the protestors to clear the site. 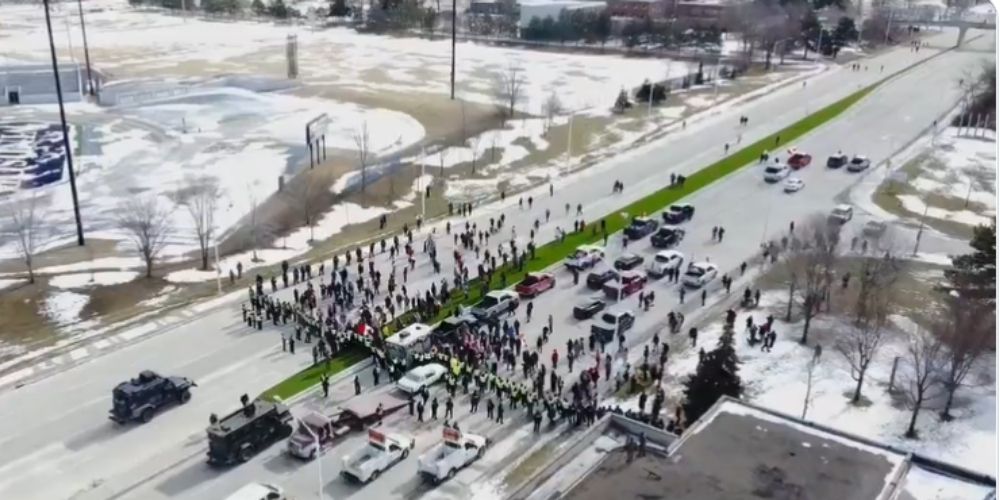 Windsor police have begun moving in to disperse the ongoing freedom protest on Ambassador Bridge connecting Detroit, Michigan, to Windsor, Ontario. This comes a day after an Ontario judge ordered the protestors to clear the site.

Police moved to enforce an injunction against the pro-freedom demonstration which has blocked traffic across the Ambassador Bridge by demonstrators protesting against COVID-19 restrictions. Based on available footage, it appears that a SWAT team has been sent in Saturday morning to end the protest.

Around 11 am local time, Windsor police announced on Twitter that law enforcement could begin making arrests. "Enforcement continuing, individuals who are located within the demonstration area are subject to arrest," the Windsor police wrote. "People are advised to immediately vacate the area."

A communication from Windsor Police Service said Friday that obstruction with the "lawful use" of property such as the Ambassador Bridge is a criminal offense known as mischief to property. The police said they're "providing notice that anyone blocking streets or assisting others in the blocking of streets may be committing a criminal offence and must immediately cease further unlawful activity or you may face charges. You could be arrested if you are a party to the offence or assisting others in the direct or indirect commission of this offence."

Canadian authorities say the ramifications for such actions include seizing vehicles and barring protestors from visiting the United States for the foreseeable future.

Demonstrators told Fox 2 News that the Freedom Convoy supporters plan to stay to continue demonstrating and will remain peaceful, even though officials are now threatening arrest. "We're staying here for our rights, we're not just walking out of here after this," one protestor said. "We've gone around and policed ourselves. We've said there's no way anybody intends to get violent."

"It'll be peaceful. We're Canadians, we're not going to fight the police," another protestor said, while police were aided by drones and other tactical units.

Placing the province under a state of emergency, Ontario Premiere Doug Ford issued an emergency order Friday demanding that protestors reopen the Ambassador Bridge, a busy trade route between Canada and the United States.

In that regard, the Manitoba province recently announced they're ending all restrictions by March 15. Saskatchewan and Alberta have already moved to end their restrictions. Ontario is in the process of doing the same.