"If CNN were smart, they’d open up a Conservative network, only have me on, and it would be the most successful network in History," Trump wrote. 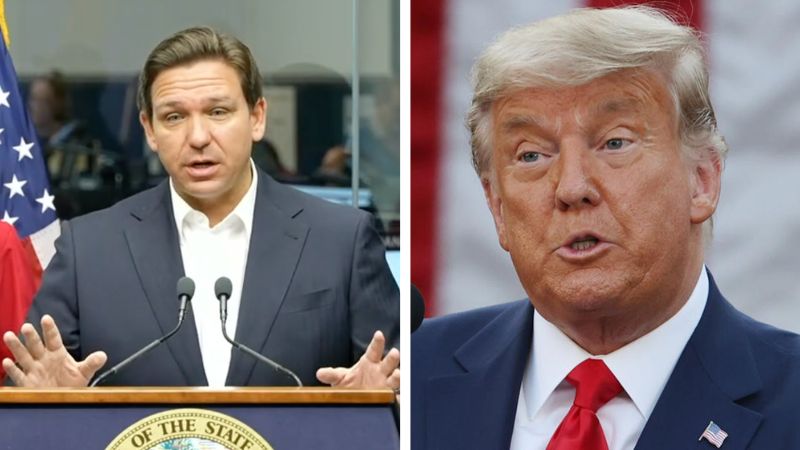 "NewsCorp, which is Fox, the Wall Street Journal, and the no longer great New York Post (bring back Col!), is all in for Governor Ron DeSanctimonious, an average REPUBLICAN Governor with great Public Relations, who didn't have to close up his State, but did, unlike other Republican Governors, whose overall numbers for a Republican, were just average - middle of the pack—including COVID, and who has the advantage of SUNSHINE, where people from badly run States up North would go no matter who the Governor was, just like I did!" said Trump.

"Ron came to me in desperate shape in 2017—he was politically dead, losing in a landslide to a very good Agriculture Commissioner, Adam Putnam, who was loaded up with cash and great poll numbers. Ron had low approval, bad polls, and no money, but he said that if I would Endorse him, he could win," Trump continued. "I didn't know Adam so I said, 'Let's give it a shot, Ron.' When I Endorsed him, it was as though, to use a bad term, a nuclear weapon went off. Years later, they were the exact words that Adam Putnam used in describing Ron's Endorsement. He said, 'I went from having it made, with no competition, to immediately getting absolutely clobbered after your Endorsement.'"

"I then got Ron by the 'Star' of the Democrat Party, Andrew Gillum (who was later revealed to be a 'Crack Head'), by having two massive Rallies with tens of thousands of people at each one. I also fixed his campaign, which had completely fallen apart. I was all in for Ron, and he beat Gillum, but after the Race, when votes were being stolen by the corrupt Election process in Broward County, and Ron was going down ten thousand votes a day, along with now-Senator Rick Scott, I sent in the FBI and the U.S. Attorneys, and the ballot theft immediately ended, just prior to them running out of the votes necessary to win. I stopped his Election from being stolen..."

"And now, Ron DeSanctimonious is playing games! The Fake News asks him if he's going to run if President Trump runs, and he says, 'I'm only focused on the Governor's race, I'm not looking into the future.' Well, in terms of loyalty and class, that's really not the right answer."

"This is just like 2015 and 2016, a Media Assault (Collusion!), when Fox News fought me to the end until I won, and then they couldn't have been nicer or more supportive. The Wall Street Journal loved Low Energy Jeb Bush, and a succession of other people as they rapidly disappeared from sight, finally falling in line with me after I easily knocked them out, one by one. We're in exactly the same position now. They will keep coming after us, MAGA, but ultimately, we will win. Put America First and, MAKE AMERICA GREAT AGAIN!" Trump's statement concluded.

After sharing the lengthy tirade bashing Florida Governor, who many believe will be a rival to Donald Trump's presidential aspirations in 2024, Trump proposed that CNN start a new, conservative network, featuring only him.

"If CNN were smart, they’d open up a Conservative network, only have me on, and it would be the most successful network in History," Trump wrote. He has said he intends to make a major announcement on November 15 from Mar-a-Lago.

This was after Trump blasted not only DeSantis, but the conservative news media outlets of Fox, as well as Rupert Murdoch-owned New York Post, for essentially turning on Trump over the last few days since the midterm elections. 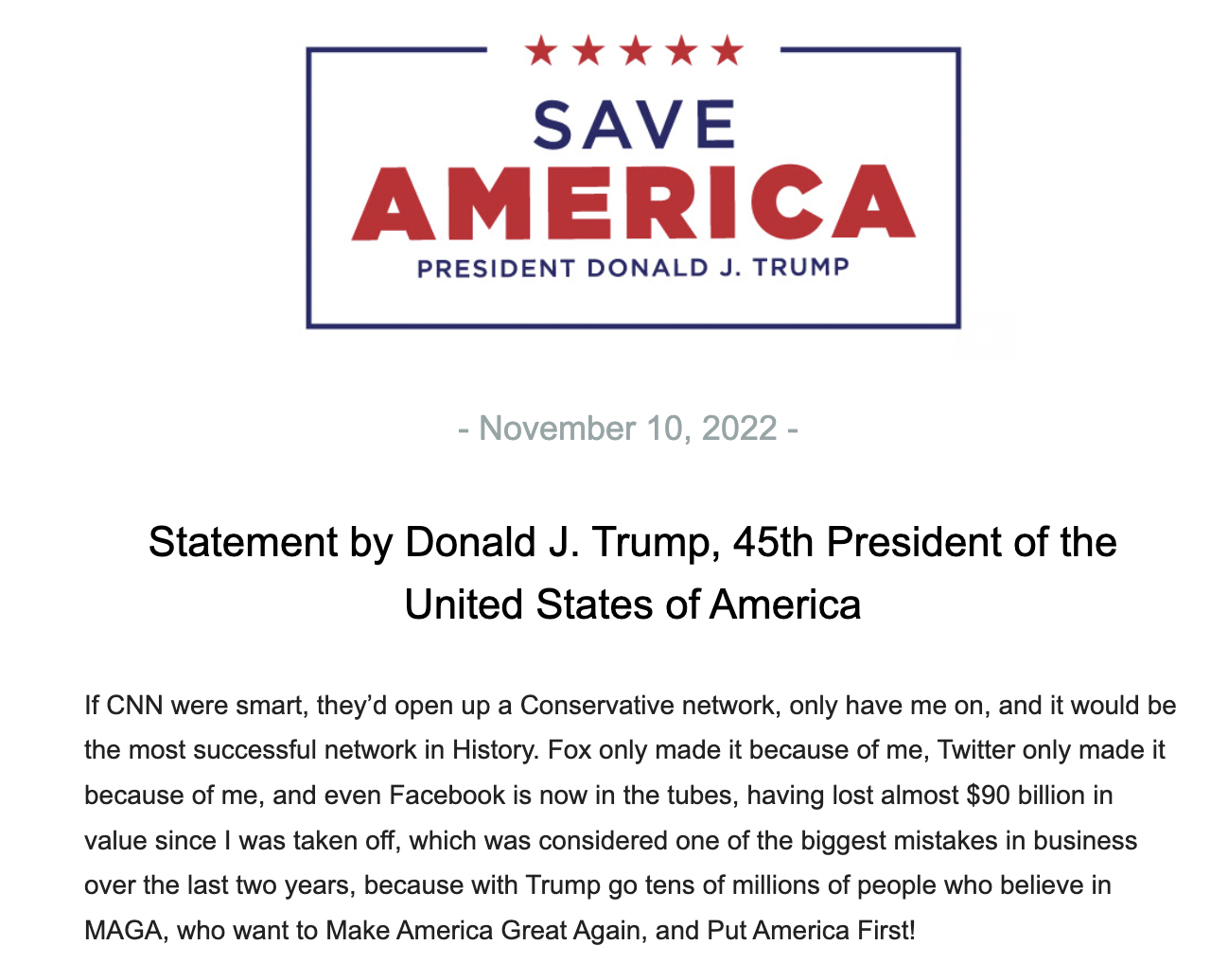 "Fox only made it because of me," Trump said. "Twitter only made it because of me, and even Facebook is now in the tubes, having lost almost $90 billion in value since I was taken off, which was considered one of the biggest mistakes in business over the last two years, because with Trump go tens of millions of people who believe in MAGA, who want to Make America Great Again, and Put America First!"

He recently said he was glad that Twitter was in "sane hands" after Elon Musk purchased the platform. Many have encouraged the new ownership to reinstate Trump's now-defunct Twitter account.

Trump, who routinely called CNN "fake news" during his presidential campaign and during his time in office, has been essentially blamed by many in media for the failure of the midterm elections to live up to the grandiose "red wave" expectations.

Conservative candidates took back control of the House of Representatives, but did not make the Senate or gubernatorial gains that were hoped for. That being said, there are still some races that are yet to be decided in which votes are still being counted.

In Nevada, the open senate seat could go to Adam Laxalt, who is in the lead with some 15 percent of votes yet to be counted. Georgia's senate election is too close to call, with a run-off slated for December 6, and the contentious Arizona gubernatorial race won't be determined until after this weekend, per election officials, though Trump-endorsed Kari Lake is in the lead.