"This will go down as one of the great military defeats of all time. It did not have to happen that way. This is not a withdrawal. This was a total surrender, a surrender for no reason," Trump declared. 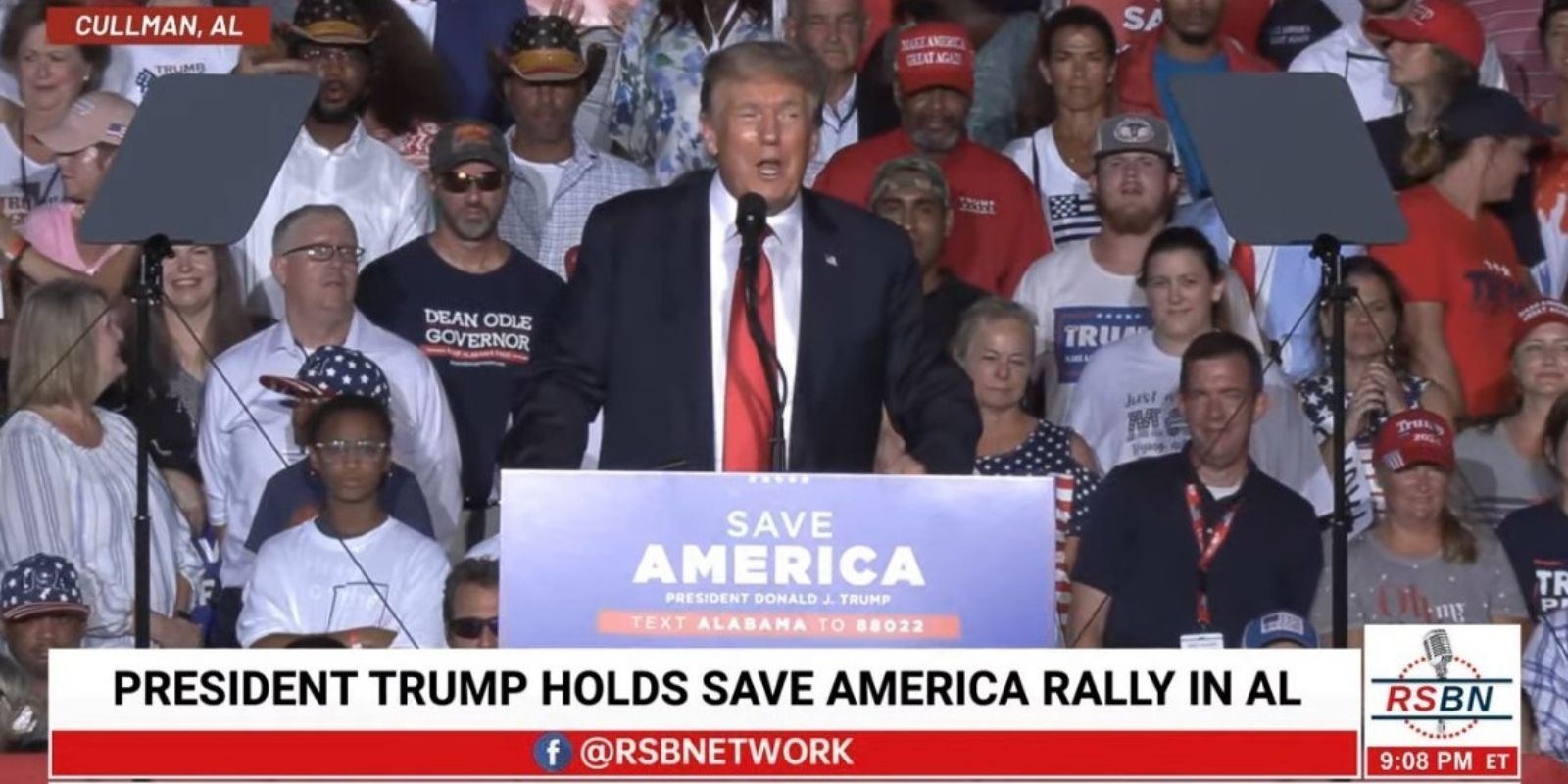 At the Save America rally Saturday in Cullman, Alabama, former President Donald Trump blasted the Biden administration over the Afghanistan disaster.

Taking the stage at York Family Farms before an estimated crowd of 40,000 attendees drawn to the area, Trump ripped into President Joe Biden's foreign policy disaster in Afghanistan. "This will go down as one of the great military defeats of all time. It did not have to happen that way. This is not a withdrawal. This was a total surrender, a surrender for no reason," Trump declared.

Trump said he "dealt" with Abdul Ghani Baradar, the Taliban's de facto leader, threatening: "Anything happens, we are going to reign terror upon you ... Don't touch our American citizens. Don't ever come to our country."

"The scene of those big giant planes taking off with people hanging on the sides and falling off. There'll never be anything like that.. This will go down as one of great military defeats of all time. It did not have to happen that way."

"They understood our power and that I would not hesitate to use it in defense of our citizens and the Taliban understood that, maybe as well as anybody. [The Afghanistan crisis] would have never happened if I was president. Our country was so respected. Everyone respected our country," Trump quipped during the speech.

Trump said that Biden is now overseeing "the greatest foreign policy humiliation in the history of the United States of America," further slamming Biden's botched exit in Afghanistan as "the most astonishing display of gross incompetence by a nation's leader, perhaps at any time that anybody has ever seen ... Vietnam looks like a masterclass in strategy compared to Joe Biden's strategy."

"All he had to do is leave the soldiers there until everything's out: our citizens, our weapons. Then you bomb the hell out of the [five] bases ... And you say, 'Bye bye.' The scene of those big giant planes taking off with people hanging on the sides and falling off—there'll never be anything like that," Trump stated.

"Biden has obliterated our border, given up our energy independence and caused soaring inflation. He failed totally on economic policies," Trump fired off the laundry list of grievances America has faced under the Biden administration.

"So in conclusion, our movement is up against one of the most sinister forces and entrenched interests than anyone can even imagine," Trump said.

"The citizens of the United States will not be dictated to and talked down to by incompetent politicians, corrupt tyrants, left-wing bullies or socialists, bureaucrats in Washington, DC, a place that I got to know very, very well," Trump added.

He told the mass gathering of Trump supporters: "We are descended from the heroes and the patriots, the pioneers and the legends, who tamed the great wilderness, who settled this vast continent, and who laid down the railroads, raised up the skyscrapers, and poured out their blood, sweat, and tears to build up this country into the greatest nation of the history of the world. And we are not going to let it be taken away from us under any circumstances."

Trump mocked Biden's inability to remember where he is. "'It's great to be in Idaho.' 'Sir, you're in Iowa,'" he parodied and repeated the comedic set-up, noting that Biden's gaffes occurred often. "The worst was when he was in New York and he said, 'It's great to be in Florida!' There were no palm trees," Trump jeered.

Trump said that North Korea's Kim Jong Un does not respect Biden and that the foreign leader no longer respects America, noting that when he traveled abroad to visit, he "got along great" without the threat of a nuclear catastrophe.

When the nuclear-armed North Korean leader said during the initial feud, "We have a red button on my desk," Trump recounted that he replied: "I have a much bigger red button. And my red button works. And yours doesn't."

"Do you think that [General Patton] was woke? I don't think so ... He was the exact opposite," Trump said. He pivoted to lambast notorious woke figure General Mark A. Milley who has defended the divisive teaching of critical race theory to military members. "You know what woke means? It means you're a loser," Trump jabbed, adding: "It's true. Everything woke turns to sh*t."

The event was hosted by the Alabama Republican Party and held in conjunction with the state GOP's summer meeting. The joint rally marked Trump's further support of the Make America Great Again-Keep America Great agenda and accomplishments of the previous administration under the 45th president.

The last time Trump visited Alabama was on Nov. 9, 2019, when he and former First Lady Melania Trump went to Tuscaloosa to watch the Crimson Tide play Louisiana State University, two of the top collegiate football teams in the nation.

Yesterday, the Cullman City Council declared a state of emergency in the city due to the rising number of COVID-19 cases. Trump's visit came amid the surge overwhelming Alabama's hospitals. The state's Democratic Party executive director Wade Perry called the Trump-styled main attraction "ill-advised" and "a terrible idea" to have residents gather "just to listen to the former president tell lies."

"Could you imagine if I were president and the virus was surging back?" Trump said during the speech. "That one's actually tougher than the Taliban."

Alabama Republican Party chair John Wahl responded: "I'm glad to see the Democrats wasting their money putting up a billboard in the 4th Congressional District – the district that gave President Trump his highest voting percentage in the nation. You can rest assure the Republicans have better things to do with their money and we look forward to using our funds in the 2022 elections."

Brooks is now the frontrunner for the 2022 midterm elections. He has touted Trump's support at the forefront of the Brooks campaign, displaying "ENDORSED BY TRUMP" above his own name on placards. The six-term congressman helped lead the charge in Congress to overturn the 2020 presidential election results.

He is now thrice endorsed by Trump and had stood by him twice during both impeachments, which "no other candidate" can say that, Brooks flaunted.