"It shocks the conscience of everyone who sees it," Carlson said, "but the number of people who see it is very small because it is not covered by any media." 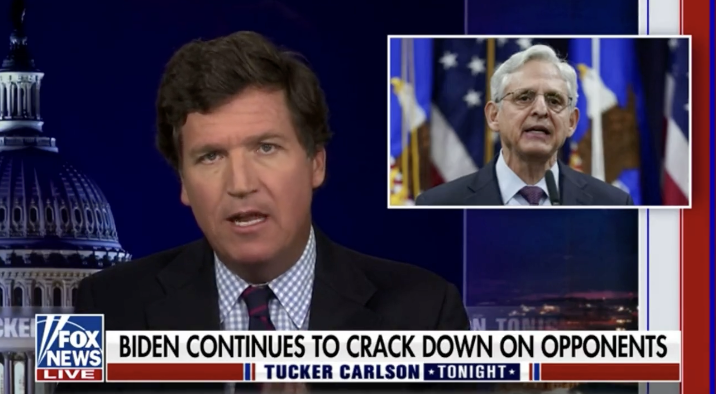 "It shocks the conscience of everyone who sees it," Carlson said, "but the number of people who see it is very small because it is not covered by any media. And it's not just happening to Amy Kremer."

Kremer was the founder of Women for Trump, and was the Chairman of the Tea Party Express.

"This show has obtained a subpoena from Merrick Garland's DOJ," Carlson continued, "issued in the past week. And what it demands is both unlawful and without precedent in American history."

"The subpoena," Carlson said, "claims to be investigating 'any claim that the Vice President and/or the President of the Senate had the authority to reject or choose not to count presidential electors.'"

"It's our core freedom, it's why we live here, it's why we're proud to be Americans. It's why so many American servicemen died protecting our country. Those are the freedoms they fought to preserve," Carlson said.

In fact, he went on to say, it is because we have free speech that when Democrats attempted to reject the electors slated to vote for Donald Trump in the Electoral College, they were not subpoenad by the incoming administration's Department of Justice, and their personal communications were not demanded as part of an investigation.

"That's why nobody prosecuted leading Democrats in 2016 when they sought to reject electors for Donald Trump. It's why none of those people, including Kamala Harris, is now in jail. But right now, according to the subpoena that we have obtained Merrick Garland's DOJ is demanding all communication from the following people on this topic, and let's be clear before we read their names, that it is not clear what the investigation is actually about. And that's the most terrifying part.

"'What is this? On what grounds are you demanding my private communications with people?' They never say," Carlson pointed out. "But included in this precedent-breaking sweep of political opponents of the Biden White House would be former White House adviser Bernie Kerick, who was the former police commissioner of New York City. Boris Epshteyn, who is the current attorney for Donald Trump," Carlson listed.

"At no time in American history has it been okay to grab the personal communications of someone's lawyer, because those are privileged. Not anymore," he said, before continuing to read off the names on the list.

"The DOJ is now going after former White House official Stephen Miller, a frequent guest on this show, with a subpoena. Why? Well, it could be because Stephen Miller went on this network and said: 'if we win these cases in the courts, then we can direct the alternate state of electors are certified.'

"But under Joe Biden, that apparently is now a crime. By the way, every one of these people has to hire lawyers to defend him or herself. And a lot of them at this point after tears of harassment, but Joe Biden can't afford it.

"In addition, we should say we've obtained the subpoena. This subpoena goes on to demand the communications from dozens of other Republicans and people who have spoken to them, including state representative Jake Hoffman in Arizona, Republican National Committeemember Kathleen Burden in Michigan, former US Representative Lou Barletta in the state of Pennsylvania, and Republican state party secretary James DeGraffenreid in Nevada, among dozens and dozens of others."

Biden's Attorney General Merrick Garland is conducting a criminal probe into Donald Trump. As part of that probe, he authorized a search warrant for documents in Trump's possession at his Mar-a-Lago home. An affidavit revealed that the DOJ alleged that the documents were being stored improperly.

The DOJ has been going after Trump allies and supporters for months, looking for any indication that they were trying to steal the 2020 election in some fashion, or that Trump was planning not to leave office at the end of his term, at which point he, like every president before him, left office.
ADVERTISEMENT
ADVERTISEMENT
tucker doj