The headliner of the event was Florida Governor Ron DeSantis, who is massively popular throughout the conservative movement. 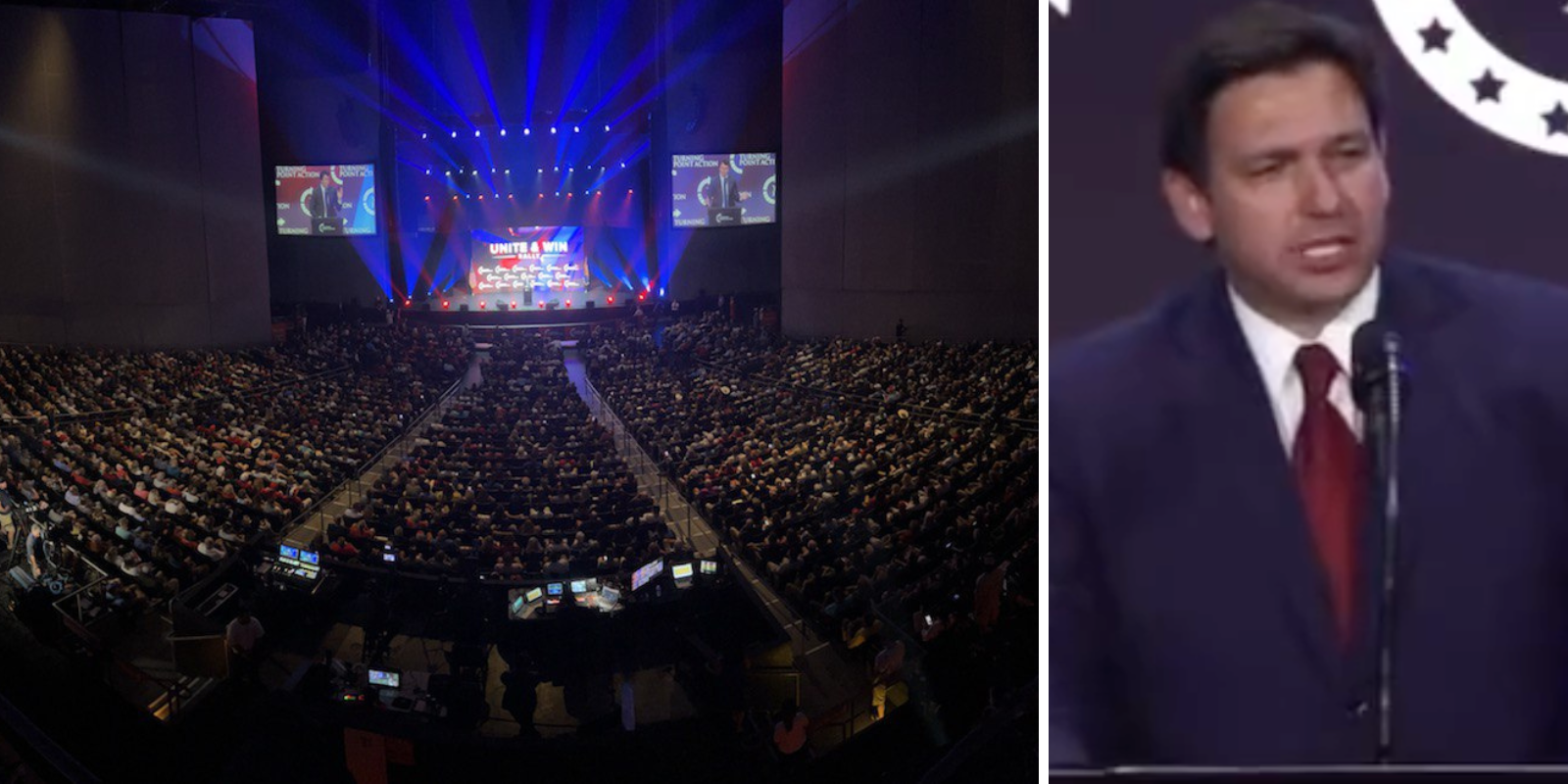 Turning Point Action held a massive rally in Phoenix, Ariz., with over 3,500 people in attendance, to show support for America First, Trump-backed candidates the US heads for the November midterm elections. Speaking at the rally were Arizona gubernatorial candidate Kari Lake, who faces off against Democrat nominee Katie Hobbs, and Senate candidate Blake Masters, both of whom won their recent primaries in the state, with support from former President Donald Trump. The headliner of the event was Florida Governor Ron DeSantis, who is massively popular throughout the conservative movement.

Charlie Kirk, Founder of Turning Point USA, spoke to the crowd about how key it is for people to take political action in their own communities, and told Arizonans to fight back against the money and power that are trying to turn Arizona into "another Colorado."

"We have a wonderful person Donald Trump that I think is going to run again in 2024. And I think a lot of people are going to be behind him," Kirk told the crowd. "But here's the good news. You live in the state that gets to determine all of this."

He slammed the FBI and the Biden administration for raiding Trump's Mar-a-Lago over a "paperwork dispute" while letting Hunter Biden and Hillary Clinton off the hook.

And to take back America, it will take "all of us," Kirk said.

"You live in the place where everything you do matters. You live in the state where if America is going to survive as a constitutional republic, separation of powers, independent judiciary, respect for the unborn protection of our children, it's all going to happen here," he said.

"We have to understand that the left is going to get fat and lazy off the amount of money that they don't even have to work for, the funding coming in the big, big billionaire oligarchs that fund out of state, to turn Arizona," Kirk said.

Kirk handed off the stage to Senate candidate Blake Masters, who boosted Trump and DeSantis, and spoke about the failures of blue states and cities, which are seeing a loss of population as crime policies, Covid restrictions, and high taxes push people out to red states and cities.

"Everybody knows that Democrats are taking America in the wrong direction," Masters said.

Gubernatorial candidate Kari Lake had a message for the young people in the crowd, saying that Democrats used Covid to punish students and kids, and that has created an entire generation of young conservatives ready to fight back and to fight for their freedom.

Lake spoke about the necessity of states' rights and state sovereignty, and the unity of the Republican Party. She joked about former President Trump and Ron DeSantis both having "BDE."

Lake spoke out about the issues that landed her in the contender spot for Arizona governor, saying that that schools need to be brought back on track from dangerous critical race and gender theory indoctrination, that drugs like Fentanyl need to be stopped from coming across the US border, that the border needs to be managed and controlled, cities to be made safe again, and for men to stop hearing that they are toxic simply for being male.

"Here's what we're going to do for Arizona," she said, "And I don't care frankly, if you're with the Democrat Party, the independent party, the Republican Party, the pizza party or the pool party. Our policies are going to help all Arizonans."

Ron DeSantis was out on the campaign trail for Lake and Masters, boosting Florida along with Arizona in his remarks. DeSantis touched on key issues facing conservatives during these midterms, those issues that have galvanized not only conservatives, but independents and disenfranchised Democrats across the country.

"If you look around this country, and you survey the damage and the destruction that's been done by leftist politicians, in cities and states, all around the country, the fact of the matter is when leftist government takes hold, society flounders crime goes up, they release people back on the street, they don't prosecute, you have homeless you have drugs, you have higher taxes, everything you can think of. They destroyed their communities. And it shouldn't be that way," DeSantis said.

DeSantis spoke of Florida's many recent successes, from not falling in with the Covid restrictions than ran rampant in other states, restricting freedoms and destroying economies, to the vast numbers of transplants the state has seen from residents of blue states across the country.

"We made sure to lift people up. We wanted to protect their freedoms and jobs and businesses, make sure kids could get an education and not lock them out of the classroom. We lead the fight against vaccine mandates and facts passports," DeSantis said.

"If you put them in power," he said, "they will restrict you. They will mandate you and they may even lock you down again, that could absolutely happen. So you cannot trust them with power. And you've got to make sure you're electing people that respect your freedoms and respect your rights. And I can tell you what we did in Florida was really lead the nation."

"These fights are about protecting us our kids, about doing justice to those who have sacrificed, who given the last full measure of devotion so that we could be free. And it's not going to be easy, but we have no choice but to fight. So put on the full armor of God," DeSantis said. "Take a stand against the left schemes. Stand firm for what is right you will face flaming arrows but the shield the truth will protect you. Together, we will keep our state's free, and we will take this country back."