"This is the kind of stuff that’s corrosive. Here he draws a sweeping conclusion off of a single retrospective study in Israel that hasn’t been peer reviewed. But this tweet will end up going viral and driving news coverage." 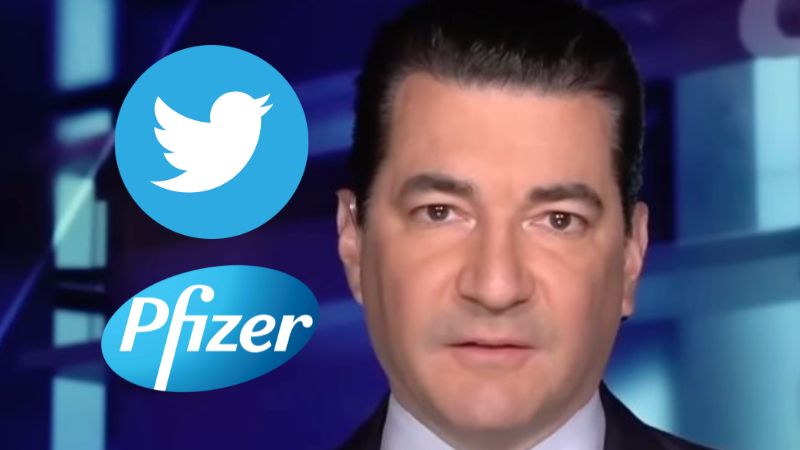 Alex Berenson dropped records from the Twitter Files on Monday, stating that a board member for Pfizer pressured Twitter to suppress and censor any posts questioning the efficacy of the company's mRNA vaccine.

The email subject line contained a tweet from Dr. Brett Giroir, who had briefly served under Gottlieb in the Food and Drug Administration.

That tweet read: "It’s now clear that [Covid-19] natural immunity is superior to [vaccine] immunity, by ALOT. There’s no scientific justification for [vax proof] if a person had prior infection."


The tweet added that CDC Director Rochelle Walensky and President Joe Biden "must follow the science. If no previous infection? Get vaccinated!"

In response to the tweet, Gottlieb told O’Boyle, "This is the kind of stuff that’s corrosive. Here he draws a sweeping conclusion off of a single retrospective study in Israel that hasn’t been peer-reviewed. But this tweet will end up going viral and driving news coverage."

O’Boyle forwarded Gottlieb’s email to the Twitter "Strategic Response" team through Jira, an internal system used by Twitter for managing complaints, according to Berenson.

The Strategic Response team is responsible "for handling concerns from the company’s most important employees and users," Berenson wrote.

O’Boyle wrote in this forwarding email, "Please see this report from the former FDA commissioner," leaving out that Gottlieb was a Pfizer board member, one of the companies manufacturing the mRNA vaccines used against Covid-19.

While a Strategic Response analyst found that the tweet didn’t violate Twitter’s rules on misinformation, the tweet was still flagged as "misleading."

Gottlieb brought forth a tweet to O’Boyle again on September 3, 2021, written by Justin Hart, which stated, "Sticks and stones may break my bones but a viral pathogen with a child mortality rate of ~0% has cost our children nearly three years of schooling."


O’Boyle once again referred to Gottlieb as only "former FDA Commissioner Gottlieb," though Twitter did not end up acting on this complaint.

Gottlieb also responded, writing in a Twitter thread, "In the past, I've raised concerns with Twitter related to the safety of me and others, and threats being made on the platform. This included direct as well as specific threats. Sometimes it included statements that I believed were purposely false and inflammatory."

Gottlieb said that "The selective disclosure of my private communications with Twitter stokes the threat environment."

"So does actions that empower people who’ve shown little restraint when it comes to purposeful vitriol. It instigates more menacing dialogue, with potentially serious consequences," he added.

Gottlieb released additional emails in which he communicated with Twitter, adding that "safety remains an existential concern for Twitter," and that "if the goal of TwitterFiles is transparency, here's some of the private e-mails I had with Twitter."

One of these emails to O’Boyle on October 1, 2021, said, "Todd, this doxxes me, invokes my wife. I have given it over to some security folks, but wanted to flag for you as well."

In response, O’Boyle wrote, "Hi Scott - sorry to hear that. I’ll send it to our team right away."

Another email, sent to O’Boyle on August 31, 2021, highlights a comment made by a person, directed at Gottlieb, stating, "Execute this bastard!"

An April 3, 2022 email to O’Boyle flagged a number of messages from a user calling Gottlieb a "murderer" and saying he would soon be "judged" or need to be held "accountable." Gottlieb noted that this user also made various posts regarding gun rights.

"Being on the receiving end of these, it does feel to come close to inciting violence. I have included some tweets below, but there are tweets about every day or two along the same lines."

Gottlieb and Berenson have come head to head before, with Berenson revealing in October of 2022 that Gottlieb, "a director of Pfizer, on the executive committee of Pfizer, which is made 10s of billions of dollars from selling these vaccines, went to Twitter and said 'this guy is a problem.' And then they banned me."

Berenson, speaking with Tucker Carlson, revealed that Andy Slavitt, "who was in the White House as a senior adviser to the Biden administration's COVID Response Team," had been talking with Twitter as early as April 2021 about "who I was, and that I was a problem for the White House and I was discouraging people from getting the vaccines which the White House wanted, and asking them why they hadn't banned me, so we know that."

Berenson later added, ""In July they gave me three strikes, and I already had one previous strike, which I didn't even know about. So I was one strike away from being suspended at the end of July. And by the way, Andy Slavitt, who is no longer in the White House, but was still sort of at the center of this conspiracy and talking to Albert Bourla, who was the head of Pfizer, and talking to people inside the administration, on a practically daily basis, was very upset."

"He was continuing to push Twitter secretly to ban me," Berenson continued. "Still, when I came back on the platform last year in August, and was asking even harder questions about the vaccines, at a time when the Biden administration knew they were going to be pushing for mandates, knew they were gonna be pushing for boosters, they still wouldn't ban me. And then Scott Gottlieb, who is a director of Pfizer on the executive committee of Pfizer, which is made 10s of billions of dollars from selling these vaccines, went to Twitter and said this guy is a problem and then they banned me."

Berenson’s Twitter account was later restored after the social media company settled a lawsuit with the journalist.

Shortly after Berenson revealed this, Gottlieb joined CNBC’s "Squawk Box," stating "I'm unconcerned about debate being made. I’m concerned about physical threats being made for people's safety."