"We're seeing an alarming number of Republican officials who are saying they're being very clear. They're not going to accept the results of these elections. That's a problem," the press secretary said. 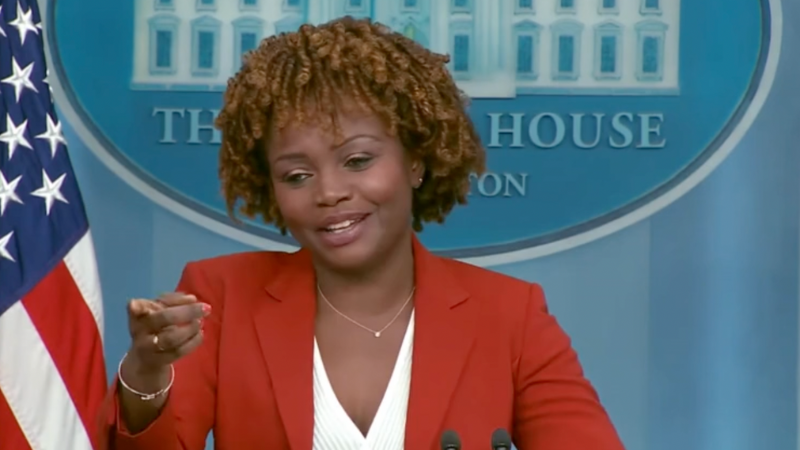 The White House press secretary on Wednesday declared that it is the belief of the President that Republicans are "not going to accept the results of these elections." At stake on the Tuesday midterm ballot is the balance of power in both branches of Congress.

The GOP has been making gains in polls against their Democrat rivals, with contentious elections in Pennsylvania, Georgia, and Arizona, as well as in states where Democrats had reason to believe they had the results in the bag, such as Oregon, New York, and Washington.

The question from White House reporter Kelly O'Donnell in regard to Biden's just-scheduled speech Wednesday night, which is anticipated to be a revisit of the disastrously divisive speech he gave in Philadelphia in September, where he attacked Trump supporters and Republicans.

"To what degree could you characterize how much the Pelosi attack influence the President's decision to give this address tonight?" Kelly O'Donnell asked. "How much of a catalyst is that? And kind of as a related question, has the President made any personal outreach or considered making personal outreach, to Republican leaders to ask them for a more forceful response to condemn that attack and other violence? I understand the power of the bully pulpit tonight, but has he done any direct contact to Republicans?"

"And I appreciate your question and I understand your question," Biden's press secretary Karine Jean-Pierre replied. "I'm going to start with the last one first. It should not be controversial, to speak out against political violence. It should be something as political, as political leaders should automatically do in a forceful way. And you all have reported on what happened to Paul Pelosi and how horrific it was and how devastating it was and how dangerous that action was.

"And the rhetoric that we're seeing, that rise of rhetoric that we are seeing, you know, you have people out there who listen, and who take that rhetoric very seriously. And so the President believes that it shouldn't have to, he shouldn't have to call them to say, 'hey, you need to condemn, condemn what happened a little more forcefully.' That is something that should just be something that's automatic, and they should just do that. But the President, again, is making the speech because we're seeing an alarming number of Republican officials who are saying they're being very clear. They're not going to accept the results of these elections. That's a problem," she said, before noting Biden's remarks on the matter in several states as he was on the stump for Democrat candidates.

That question from O'Donnell was followed up on repeatedly by the White House press corps. Peter Doocy asked pointedly if "Biden thinks it is a threat to democracy if someone votes Republican."

Jean-Pierre claimed that was "a ridiculous question," but went on to blame what she termed "mega MAGA Republican officials," who she says are "pro-police, but then they are also pro-insurrectionist" and who want to defund the FBI. This after many reports of intense Democrat-leaning partisanship within that agency.

Doocy asked if Biden would "call out Republicans that deny election results and Democrats" who do so, and again, Jean-Pierre said that the President "has always condemned political violence."

Jean-Pierre addressed another reporter's question as to whether or not the President felt he could still lead the nation were Congress to flip red for the second half of his term in the Oval Office. In response to that question, she again brought up political violence, equating the GOP entirely with violence, and not with a shift in policy, perspective, or values.

The President, she said believes "that there are far more Americans of every background and belief who reject the dangerous path of political violence than accept it. We see this in polling, we see that majority of Americans do not, do want to protect our democracy, and do not, do not agree with the political violence, do not agree with the rise of rhetoric that we're seeing. And so I'll leave it there. That's what we're seeing from Americans, the majority of Americans. I'm just not going to get into hypotheticals from here."

Again, Jean-Pierre was asked about the reasoning behind Biden giving the speech tonight, and again, she equated the Democrats' potential loss with political violence from the GOP.

"Was the attack on Paul Pelosi an impetus for this speech to happen?" She was asked.

"This isn't new for this president," Jean-Pierre said. "He's talked about, we all know about the 'soul of a nation' and how he decided one of the reasons he decided to run in 2019 was because of what he was seeing, was because of what occurred in Charlottesville, which was devastating to see that in our streets, in America, and he spoke very clearly."

"You saw you saw the op-ed that he wrote when he saw that and so it's it has always been something that's been top of mind for him," she continued, noting numerous speeches where he had uttered that same phrase.

"Clearly we are seeing an uptick," she said, "a sad uptick of rhetoric, of political rhetoric, coming from really extreme Republicans in office and also yes, you know, we saw this violent, awful, horrific attack on Paul Pelosi. And so, you know, there are reasons that he believed this time was now to make sure that he spoke directly to the American people again, and he has said this before, this is nothing new. We are at an inflection point. These are not regular, regular normal times."
ADVERTISEMENT
ADVERTISEMENT
karine jean pierre 1102