McCray thought young children could easily understand the unicorn’s sliding scales of male/female and man/woman that are labeled “sex assigned at birth,” and said she then tells them that they can be born a boy or girl but that they "may not feel that way." 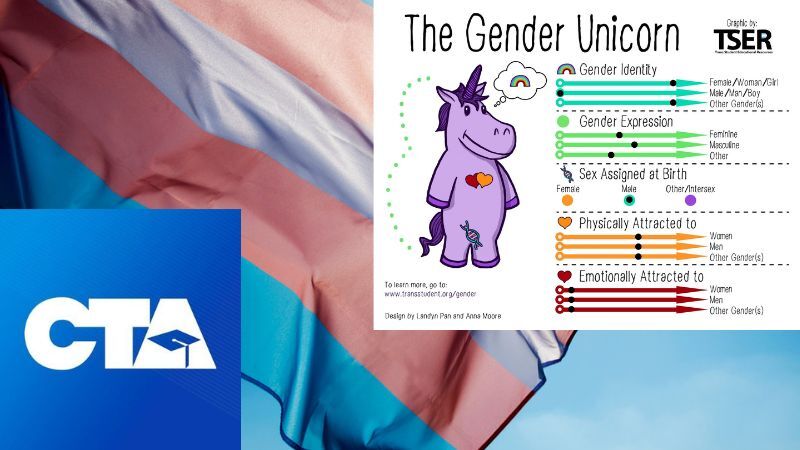 A California early childhood educator considers the Gender Unicorn an age-appropriate way to teach young children about gender and sexuality.

Danita McCray, a child development teacher in the Sacramento City Unified District, gave a presentation at a 2021 California Teachers Association (CTA) conference in which she advises other educators to use the gender unicorn to introduce the concept of gender identities to children as young as preschool, reports Fox News.


“This is the gender unicorn. I thought this would be a great tool that you can use with your students,” said McCray in the presentation. “You can download this and you can talk to them about it, and of course it’s age-appropriate.”

McCray thought young children could easily understand the unicorn’s sliding scales of male/female and man/woman that are labelled “sex assigned at birth,” and said she then tells them that they can be born a boy or girl but that they “may not feel that way.” This she felt was an age-appropriate way to speak to children just learning about the world and who believe in Santa and the Tooth Fairy.

McCray’s classroom has no girl toys and no boy toys, as well as no girl bathroom or boy bathroom, and said she tells parents that if they don’t like the lessons she teaches or the way her classroom is set up, their child can “go to another classroom.”

According to Fox News, when McCray was asked by a fellow teacher whether toddlers were too young for this type of lesson, McCray responded that she had done her research and that she has a doctorate degree.

“Children are not too young at five years old. Children understand gender as early as three years old,” she replied.

Later in the presentation, McCray recommends reading the book I Am Jazz, a children’s book about reality TV star Jazz Jennings who was socially transitioned as a young child, put on puberty blockers and cross-sex hormones as an adolescent and then had vaginoplasty at age 18.

“She’s gone through all the necessary changes to make herself, you know, surgery and stuff, an actual woman,” said the early childhood activist educator. “This book is actually a preschool age book.”

"What I really like about it is so simple. She says I was born a boy, but my brain is telling me that I'm a girl," explained McCray, before sharing how the children respond by saying: "So he was born a boy and he looks like a boy, but his body and his brains telling him that he needs to be a girl. So now he's a girl." McCray said she replies "yes" to this interpretation of the book.

“So I have read this to my class. They absolutely love this book,” McCray continued. She explained that the reason young children love it so much is because Jennings got to be who Jennings wanted to be, and the parents allowed it, which often prompts some of her students to complain about things their parents won’t allow them to do.

Information that is missing from the colorful children’s picture book though is the fact that Jennings suffered major complications post-surgery, in part due to the fact that Jennings had never gone through puberty so remained in a child-like state, meaning there wasn’t much penile tissue for the surgeon to work with when fashioning the cavity that is supposed to resemble a vagina. Jennings’ surgeon, Marci Bowers, current president of WPATH, has stated that Jennings had never orgasmed prior to the surgery, and was unlikely to after, and acknowledged that this is important for forming intimate relationships as an adult. Jennings now suffers from an eating disorder.

“We think they’re too young,” said McCray on the subject of reading such questionable material to preschoolers. “They’re really not too young.”

These are the types of materials that children are exposed to in every nation touched by the modern trans rights movement. Earlier this week, the Post Millennial reported on an almost identical lesson plan being promoted by a Canadian teacher for Trans Awareness Week.

These materials are not part of the official school curricula in most places, but that doesn’t stop teachers from indoctrinating young impressionable children with these unscientific, politically motivated lies.

“Instead of being gatekeepers against toxic fads in education, radical teacher-activists are actively robbing America’s young and vulnerable [of] their childhood innocence by obsessing over the dangerous gender ideology,” Wenyuan Wu of the Californians for Equal Rights Foundation told Fox News. “What is worse is that such activism is encouraged, endorsed, and sponsored by teachers’ unions.”

Fox News reached out to the district and were told that McCray’s comments would be investigated to determine whether she had violated their policy.