A boost in support for Green Party Leader Elizabeth May and steady numbers for Conservative leader Andrew Scheer. 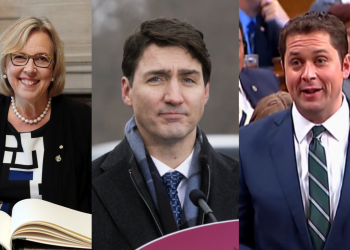 Prior to the testimony of Wilson Raybould, Justin Trudeau's ethical rating sat at 17% This was good enough for third place among the party leaders, with 21% of Canadians viewing Conservative Party leader Andrew Scheer as the most ethical topped only by Green Party leader Elizabeth May at 23%.

However, following the testimony of Wilson-Raybould, trust in Trudeau's ethics has dropped five points to 12%. Scheer's numbers remained unchanged at 21% but May's received a big boost, climbing up to 29%.

Notably, throughout both waves of polling, the percentage of Canadians who remained unsure or did not view any of the party leaders as ethical remained at 27%.

On a party level, the Liberals are not faring any better. In the first wave of polling done from February 23-26, only 14% of Canadians viewed the governing Liberals as the most ethical political party.

The numbers for the Greens and Conservatives remained the same from the leadership polling, with the parties sitting at 23% and 21% respectively.

Canadians, when given a binary choice between an Andrew Scheer Conservative government and a Justin Trudeau Liberal government in the first wave of polling, chose Trudeau's Liberals as the more ethical option at 39%, followed by Scheer's Conservatives at 34%.

However, in the second wave of polling, faith in the ethics of Trudeau's government fell five points, tying him with Scheer's Conservatives at 34%. The difference was carried over into the unsure category, with 32% of Canadians being unable to make up their minds, up from 27% in the first wave.

Influential at the ballot box

However, in the second wave, that number rose to 26%, with one in four Canadians agreeing that it would impact their vote.

While the economy clearly remains the top issue for many Canadians, in the wake of the devastating testimony of Wilson-Raybould last week, the importance of the SNC-Lavalin scandal is certainly increasing in the minds of Canadian voters.