The CDC has released new, inclusive language that they want the American public to use in place of lots of already extant words that we typically use to describe individuals or groups. 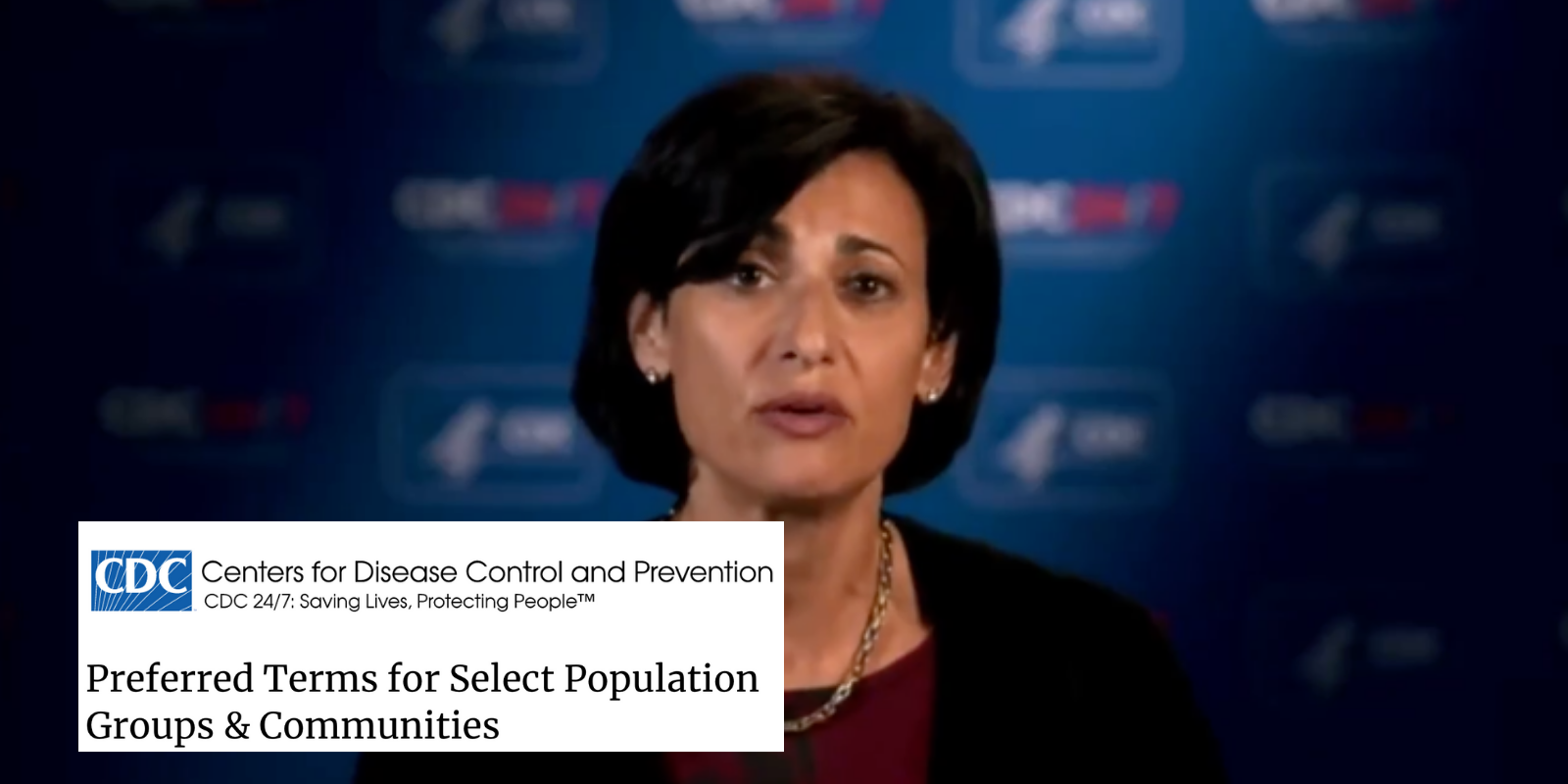 The CDC has released new, inclusive language that they want the American public to use in place of lots of already extant words that we typically use to describe individuals or groups. Essentially, in place of single words that are used, the CDC wants us to put the word "person" first, before the descriptor, except in the areas where they believe that group identity supersedes individual identity, as in race, ethnicity, gender, and sexual orientation.

There are many examples of this, in many categories, such as "Corrections & Detentions," where words for "prisoner," "criminal," and others are to be replaced with "People/persons who are incarcerated or detained," or "Persons in pre-trial or with charge." In the category of "Disability," terms like "Differently abled" should be replaced with "People with disabilities/a disability." "Drug-users/addicts/drug abusers," etc., should be instead "Persons who use drugs/people who inject drugs."

The idea behind this is clear even without reading the CDC's preamble: the Centers for Disease Control and Prevention want Americans to see and think about each other as people first, before they consider the person's condition. The CDC's intention is to humanize us, and seem to believe that their function is to tell us how to speak, and how to think, in order to do that. However, it is poorly designed, and will only be replaced by new missives in very short time.

The CDC has as its mission to protect public health, "to protect America from health, safety and security threats, both foreign and in the US." But they also write that they have the goal of "Promoting healthy and safe behaviors, communities and environment." It must be under this aspect of their purview that they have suggested that Americans change their language.

"Homeless people" should now be "people experiencing homelessness," while "the poor" should be "people/households with incomes below the federal poverty line." The language was changed surrounding the "mentally ill," a phrase that was itself an adjustment from terms like "crazy people." "Illegal immigrants," under the category "Non-US-born Persons/Immigration Status," are now meant to be "People with undocumented status."

The CDC would be remiss if in this "person first" approach they didn't address "Sexual Orientation & Gender Identity." The words they are looking to replace under this heading include "homosexual," "transgenders/ transgendered/ transexual." The body that is mean to protect Americans from disease would prefer that the terms used are "LGBTQ, (or LGBTQIA or LGBTQ+ or LGBTQIA2)."

The CDC does not recommend that "homosexual" be replaced with "person who is sexually attracted to another person of their own biological sex," or "person who is same-sex attracted." This could be because the CDC is also uneasy with Americans using the term "biologically male/female." This medical body would rather Americans say "assigned male/female at birth" instead of using terms that denote biological sex.

If the CDC were to promote a "person first approach" here, as they do in the other categories, "homosexual" would be replaced by "person who is attracted to persons of their own assigned male/female at birth," which is not only a mouthful but doesn't mean anything at all.

In the category of sex and gender, the CDC does not use a "person first approach," but uses a sexual or gender identity first approach. More important to the CDC in this category is not the person, but their identity. In many of the categories detailed by the CDC, they note that those persons who fall into those categories may have alternate preferences as to how they would like to be referred. There is no note like that in this section.

Interestingly, there is no "opt-out" option for those persons who would like to be persons first. "Person who is biologically female," for example, is not an option for how to refer to a person. Instead, with the very language the CDC is asking us to use, it is asking us to buy in to the perspective that biological sex is a fallacy, that sex is "assigned" by doctors who deliver babies, and not an innate, human characteristic.

In the realm of race and ethnicity, the CDC recommends terms that are already common usage, saying that certain terms, such as "Eskimo," "Orientatal," "Afro-American," or it's predecessor "Negro" not be used, though these terms have been well out of common usage for years. They also say that the term "Caucasian" is a problem, and say that instead "White persons" should be used, capitalization per the CDC. The CDC uses their perspective as a medical health organization to instruct people to capitalize the terms "black" and "white."

Instead of these out-dated terms, the CDC recommends terms that are already in wide-usage, such as "Black persons," "White persons," or to refer to all people who are not "White persons," "People who identify with more than one race." They also suggest that "people from some racial and ethnic groups" be used. As for "Latinx," they say that "Latinx has been proposed as a gender-neutral English term, but there is debate around its usage. Its use may be considered on an audience-specific basis."

Language changes over time, and in recent years, due in part to social media, language has been changing even more rapidly than during previous generations. Linguist John McWhorter spoke about the trend that spawned exactly what the CDC is currently undertaking.

At the 2018 Aspen Ideas Festival, he referenced what he called "the euphemism treadmill." This was described by Conor Friedersdorf as "the process by which a once not-disrespectful word like cripple takes on a negative connotation and is replaced by handicapped ... which takes on negative connotation and is replaced by disabled ... which is itself in the process of being replaced by differently abled." Which the CDC now wants to replace with "People with disabilities/a disability." McWhorter illustrated this example three years ago.

McWhorter said that because of social media, "the euphemism treadmill is going to start going faster, and I think we need to get used to it." The CDC has certainly jumped onto the "euphemism treadmill" with their "preferred terms" under the heading "Gateway to Health Communication."

The CDC writes that these "preferred terms" for "select population groups" are intended to "represent an ongoing shift toward non-stigmatizing language." But by McWhorter's interpretation of the rapidity of this process, it will be very few years before this approach is replaced with still another, and that again with another, so that at a certain point words fold in on themselves and phrases become meaningless to describe anything at all.