"Open up spaces for Black and LatinX communities by refusing to send your kids to Ivy League and US News & World Report Top 50 schools and encourage friends, neighbors, and family members to do the same," the pledge calls for. 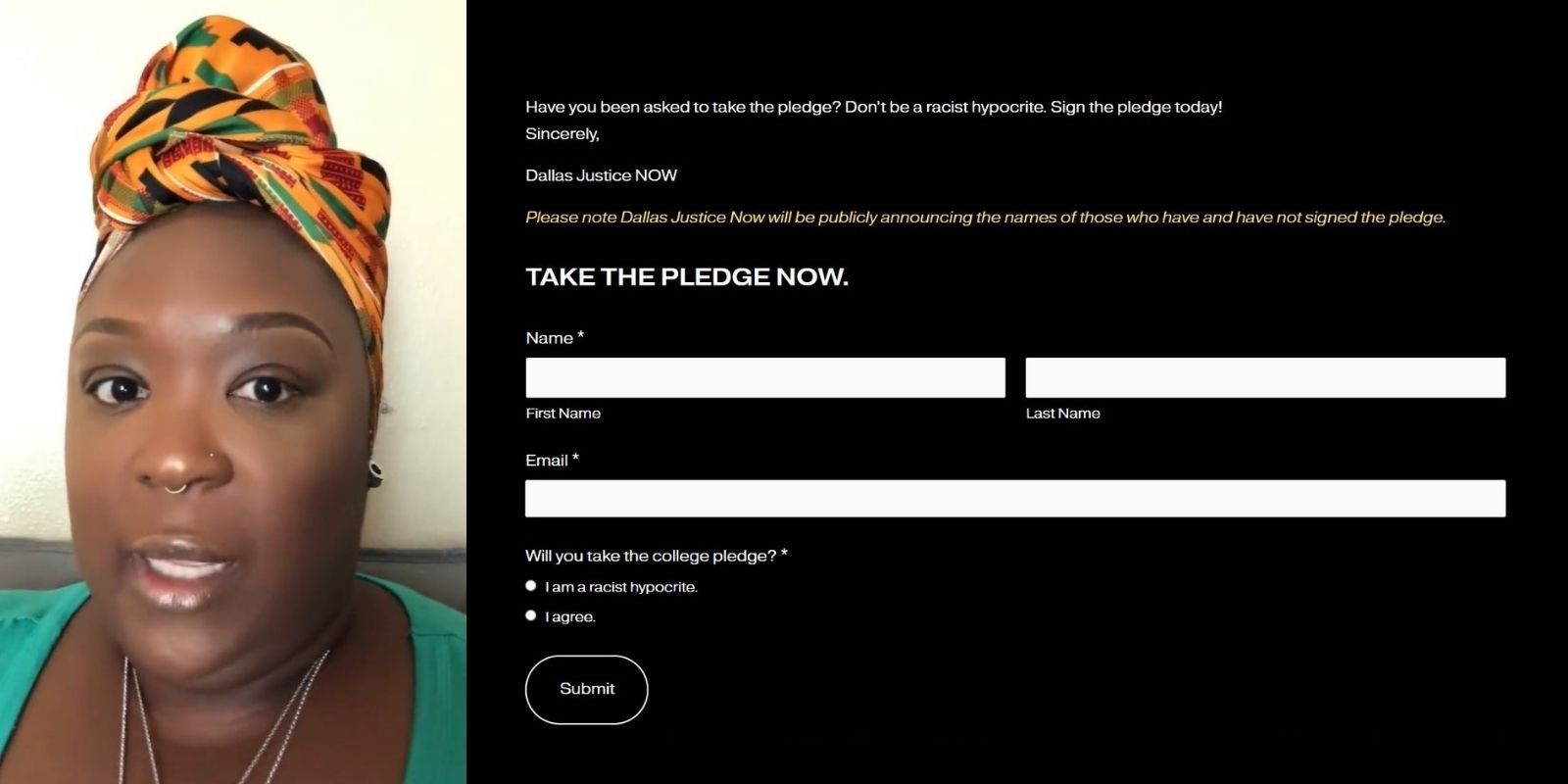 Dallas Justice Now (DJN), a "racial equity" advocacy group, has been actively campaigning to convince "wealthy white liberal" families to not send their white children to Ivy League schools or other top 50 collegiate institutions so that admission spots are available for people of color to "correct historical wrongs."

An organization purporting to be a "racial justice" group has been sending letters, informing white, affluent Democrats about the "College Pledge," around Dallas's richest neighborhoods, such as storied Highland Park:

"These Democrat parents would walk across hot coals & plan a murder for the chance their kids go to an Ivy League or other top schools. Then they get this from a Black Lives Matter Organization," tweets one user online, uploading an image of the letter, ostensibly sent to a friend or neighbor of hers:

"We are writing to you because we understand you are white and live within the Highland Park Independent School District and thus benefit from enormous privileges taken at the expense of communities of color," the letter starts.

"You live in the whitest and wealthiest neighborhood in Dallas, whether you know it or not, you earned or inherited your money through oppressing people of color. However, it is also our understanding that you are a Democrat and supporter of the Black Lives Matter movement, which makes you one of our white allies and puts you in a position to help correct these cruel injustices," it continues.

"We need you to step up and back up your words with action and truly sacrifice to make our segregated city more just," the letter demands.

Many of the reading materials on the group's website seem almost satirical in nature. On the group's website, white parents can take the pledge online. The pledge form asks users reading it, "Will you take the college pledge?" There are two options available for users to choose: "I am a racist hypocrite" or "I agree."

"Talk is not enough. Commit yourself towards taking action and making sacrifices to correct centuries of injustice," the pledge's description instructs. "Open up spaces for Black and LatinX communities by refusing to send your kids to Ivy League and US News & World Report Top 50 schools and encourage friends, neighbors, and family members to do the same. Imagine if those hundreds of thousands of spots at these institutions were occupied only by marginalized communities. Imagine the opportunities. We can achieve true equity within our lifetimes but only if white folks are willing to sacrifice their privileges."

The group's reads: "As a white person with privilege both from my whiteness and my neighborhood I recognize the need to make sacrifices for the purpose of correcting hundreds of years of murder, slavery, discrimination, and lack of educational and economic opportunities perpetrated upon people of color."

"I understand that access to top schools is a key component in economic and social advancement. Therefore, I commit that my children will not apply to or attend any Ivy League School or US News & World Report Top 50 School so that position at that school is available for people of color to help correct historical wrongs.  If I do not have children under 18 then I will commit to encouraging my white privileged friends, neighbors, and family members with children to sign the pledge and holding them accountable until they do so," the pledge concludes.

DJN notes at the bottom of the form's page that the group "will be publicly announcing the names of those who have and have not signed the pledge." A space is reserved on the website for "WHITE ALLIES WHO SIGNED."

"Our pledge was brought about by the need to give kids in our community educational opportunities that we have been denied for centuries," said DJN founder Michele Washington to Dallas City Wire.

Washington said that numerous wealthy white residents including those who live in the 95 percent white Park Cities think they're "allies" because Black Lives Matter signs sit on their property or they "parade black people like animals at their charity galas,"  Washington told Dallas City Wire. "They are the problem. If whites want to be our allies, they MUST make sacrifices."

"In the Civil Rights movement, our white allies risked their lives to end the cruel Jim Crow laws," Washington said in an interview with the local news outlet. "Yet now many people think they can get by just posting on social media—it's hurtful to those of us who have dedicated our lives to social justice when they think that is enough to remedy hundreds of years of oppression."

A white woman named Casie Tomlin who received a pledge letter on DJN letterhead last week spoke out against the initiative. Washington has since called Tomlin "racist" and named her place of employment and job title, in which both details about Tomlin have been published by the Dallas City Wire.

"Her statements are part of an ongoing campaign of harassment lodged against me, a single mother, because of an agenda she wishes to advance. I am now and have always been an active advocate for social justice," Tomlin responded.

Washington further accused Tomlin of being the embodiment of a racist "Karen" because she said the white woman only donated $3 to DJN and then called the group a "scam." Washington said Tomlin "attempted to weaponize" law enforcement by calling the University Park Police Department to complain about the pledges and "try to put our volunteers in danger."

"Calling the police on people of color when not in imminent danger is itself an act of violence," Washington alleged in the interview.