"Boys are like kittens, it’s hard to take your eyes off them," Andersson told Vice. 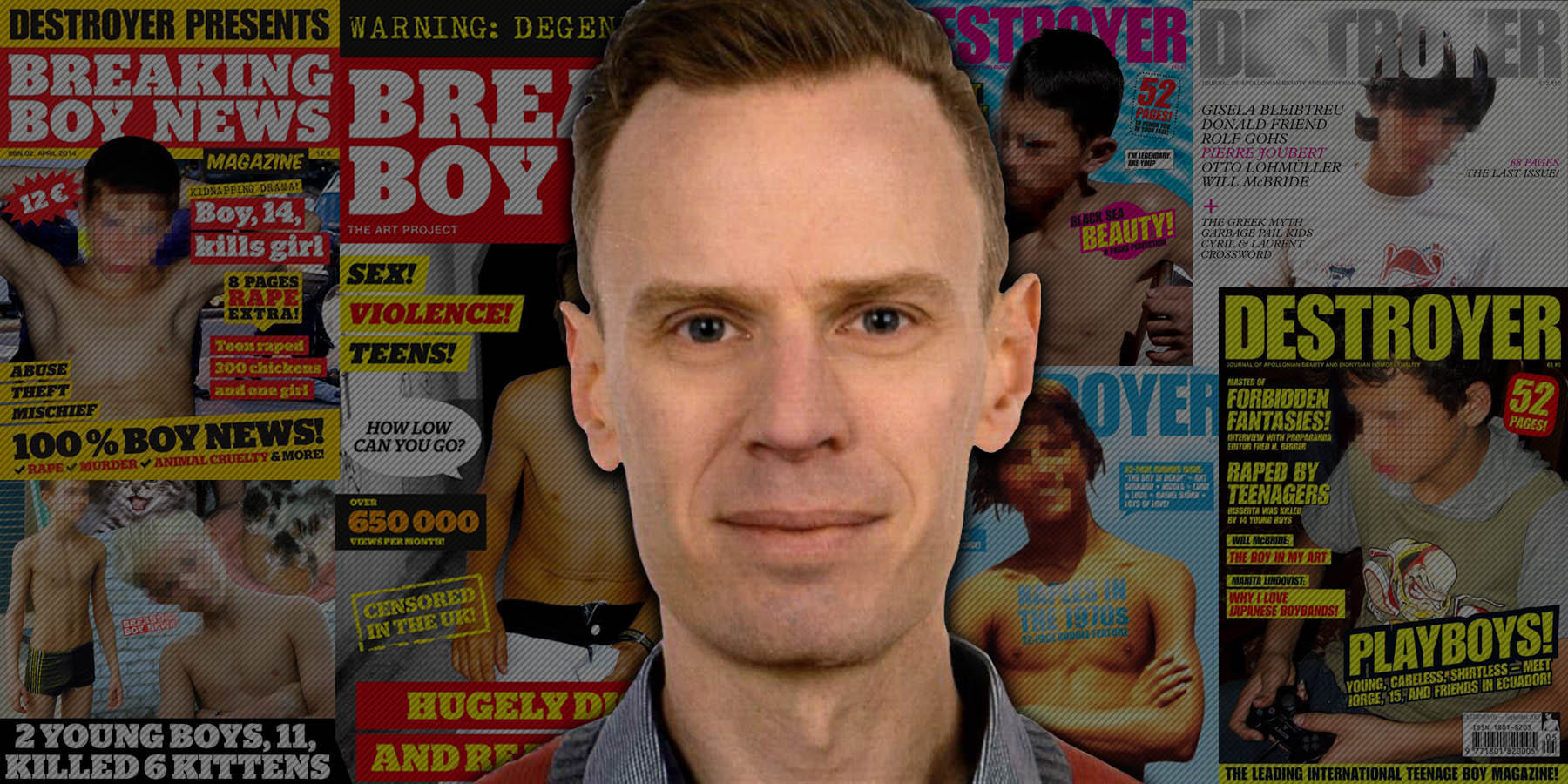 In a new report for Reduxx Magazine, Anna Slatz revealed further disturbing findings into Andersson's past. Slatz uncovered two magazines Andersson created and distributed between 2006 and 2010, that aimed to sexualize adolescent boys and normalize pedophilia.

Andersson's first venture, Destroyer Magazine, billed itself as "the leading international teenage boy magazine" and in every issue featured sexually suggestive photos of boys as young as 13 undressing.

"In Destroyer, I took everything to its limit," said Andersson in an interview with Out magazine. "The boys were supposed to be very young and sexually mature."

Andersson was not shy about his aim to objectify children. "Destroyer was about making the models objects," he says. "I didn’t want to know what they were thinking."

Many of the images in Destroyer are taken without the children's consent. Andersson justifies this by equating his endeavors to photojournalism and suggests any criticism of his work is due to homophobia.

"Newspapers publish pictures of teenagers crying at a funeral when terrible crimes or accidents happen, and the photos are published on the front page. That’s the same thing. Why is this criticism coming for Destroyer and not the newspapers? This is based on homophobia—it’s not OK for a man to find boys beautiful. Beauty is the strongest power that exists."

Andersson described his distaste for pornographic material featuring adults, boasting that his magazines exclusively contained photos of minors. "The films that are called 'barely legal' feature men dressed as boys," says Andersson. "I find it quite uninteresting. It’s just drag. The models in Destroyer are well under 18."

Andersson seems to believe that pedophilic predilections are part of the fabric of being gay. "The most controversial expression of homosexuality is when a man is attracted to an adolescent boy," says Andersson.

In addition, Andersson published a second, even more graphic magazine called Breaking Boy News, which portrayed even younger teens in a sexually suggestive manner, and violence against animals.

"The stories focused on young boys committing violence against animals, girls, and each other, with a particular emphasis on pain and degeneracy," reported Slatz.

Andersson was interviewed by Vice magazine 2012 about Breaking Boy News, a print magazine, newspaper and website that are no longer available. Andersson called it a "side-project" that he created after searching for "news stories about stuff like 'boy murders' and 'boy rapes.'"

"The boy is the one who does all the things we learn later in life not to do. He discovers things, tests limits, helps people, but he also robs, rapes or even murders. And they’re cute, of course. Boys are like kittens, it’s hard to take your eyes off them," Andersson told Vice.

Andersson seems to believe that laws protecting children from sexual predation by adults should cease to exist, claiming that teenage boys are old enough to make those decisions on their own. "I was denounced by children's advocates for allegedly 'sexualizing children,' but I said that teenage boys aren't children, but are in fact sexual – something I enhanced in my magazine, which was a tribute to the teenage boy," said Andersson.

Additionally, Andersson published a book in 2012 called The Story of Destroyer Magazine, which detailed his experience and hurdles creating the magazine. In the book, Anderrson shames those who denounce the pro-pedophile organization the North American Man-Boy Love Association.

"You don’t have to agree with NAMBLA on everything … What I criticize is the gay movement has chosen a strategy of presenting a safe image of LGBT persons instead of demanding acceptance for the deviant, whatever it is, so long as it’s legal. The condemnation of NAMBLA has nothing to do with caring abut children, but rather is about suppressing the most extreme expression of homosexuality."