Fiscus said her firing was a political move by Republicans and told investigators that the muzzle was a threat intoning that she should "stop talking about vaccinating people." 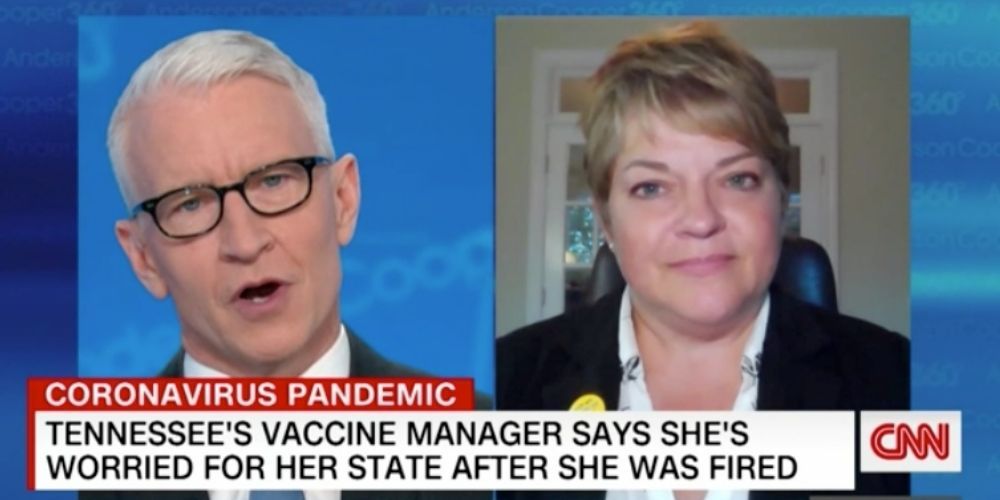 An investigation into a dog muzzle allegedly mailed to a former vaccine manager's Tennessee home as a form of intimidation was closed Monday after it was revealed that the muzzle was purchased with her own credit card.

Dr. Michelle Fiscus, a pediatrician, was terminated in July as Tennessee's medical director of vaccine-preventable diseases and immunization, after she published a memo advocating for minors to obtain medical care without their parents' permission.

CNN's Anderson Cooper had Fiscus on 360 to talk about the "dog muzzle." On the show, Fiscus quipped that whoever sent her the dog muzzle "obviously didn't know" her, because the muzzle that was sent was "a size 3 which is for Beagles and," Fiscus said, she's "obviously a Pitbull."

Fiscus had described her termination as a political move by Republican officials seeking retribution against her. She told investigators that the muzzle was a threat intoning that she should "stop talking about vaccinating people."

But According to the health department, Fiscus was fired for lousy interpersonal communication skills, poor management and attempting to direct state funds to a nonprofit she founded.

Fiscus and her husband had claimed in multiple interviews that the muzzle was sent anonymously to her state office before her termination.

But an investigation by the Tennessee Department of Safety and Homeland Security discovered that the muzzle was purchased from Fiscus' own American Express credit card, according to Axios.

Fiscus had falsely claimed to have received the muzzle as a threat a week before her termination and denied the veracity of the report on Monday in a tweet, "Hold tight. No, I didn't send it to myself."

In a statement, Fiscus said she "requested that Homeland Security obtain a subpoena as Amazon refused to release details of the account that ordered the muzzle that was delivered to my office on July 3, 2021."

"We have now learned that a second Amazon account had been established under my name," Fiscus' statement continued, "using what appears to be a temporary phone, possibly in Washington state. I have asked Homeland Security for the unredacted report so that I can investigate further and am awaiting their response."

The TDOSHS subpoenaed Amazon records and discovered two accounts in the official's name, one which Fiscus allowed the agency to review and another which was used to purchase the muzzle. Fiscus is now claiming that the second account associated with her was fabricated by someone else in an elaborate plot to send her a dog muzzle and essentially frame her for sending it to herself.

"Based on the information provided to us by Amazon via subpoena, and on information derived from interviews, there is no evidence to indicate that the dog muzzle was intended to threaten Dr. Fiscus," the report reads.

The report concluded, "The results of this investigation indicate that purchases from both Amazon accounts were charged to the same American Express credit card in the name of Dr. Michelle D. Fiscus. At this time, there appears to be no threat toward Dr. Fiscus associated with receipt of the dog muzzle."