DZSURDZSA: Ottawa sets up “Ministry of Truth” to monitor online news, but not mainstream media

The Liberals announce $7 million to monitor online "fake news" while giving the mainstream media a free pass. Have they forgotten the hijab hoax? 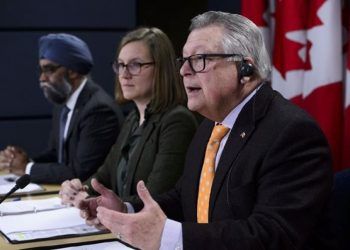 In another blatant attack on Canada’s freedom of the press, the federal government plans on spending $7 million to create a department that will monitor online news for falsehoods.

The move comes just months ahead of the 2019 election and is based on the fear of foreign interference in Canada’s electoral process. The definitely-not-Orwellian-sounding “Critical Election Incident Public Protocol” was announced by the Minister of Democratic Institutions Karina Gould, alongside Public Safety Minister Ralph Goodale and Defense Minister Harjit Sajjan.

While the government assures us that the “fact-checkers” have no political motivation, it’s hard to believe that a group getting their paycheques from the Liberal government won’t have a skewed viewpoint.

If you ask who the Liberal government is appointing to monitor what you’re allowed to read, you’ll be hard pressed to get any answers.

Like everything the Liberal government puts out, there’s always a catch. While the monitors will be reporting on online news sources, newspapers and mainstream media will be overlooked.

Except everybody knows that this is not the case.

Obviously, the Liberals must have forgotten that a year ago the prime minister and the mainstream media propagated a fake news story of their own.

Do you remember when you openly spread the false story that a young Muslim schoolgirl was attacked for wearing a hijab without checking the facts?

The prime minister has yet to own up to that one or offer any sort of apology.

If the Liberals were genuine about their desire to make sure that only the truth gets reported, they would also put the mainstream media up to scrutiny.

Except this is not the case. The truth is that the Liberals don’t feel the need to monitor media sources they have bought and paid for.

Justin Trudeau must have overlooked the fact that perhaps those media outlets are failing because people no longer have trust in them.

Perhaps Canadians are looking elsewhere for news after being force fed a steady diet of establishment propaganda?

The move is obviously a thinly veiled attempt to punish alternative media sources for not towing the Liberal line. It sets a precedent where the government will have the power to determine what is true and what is not.

The very fact that the government will be willing to overlook lies propagated by the mainstream media, while jumping on the opportunity to label alternative news sources as fake news should worry Canadians heading to the vote in 2019.

If the prime minister and his government can’t discern the truth for themselves, how do we expect them to dictate the truth to Canadians?