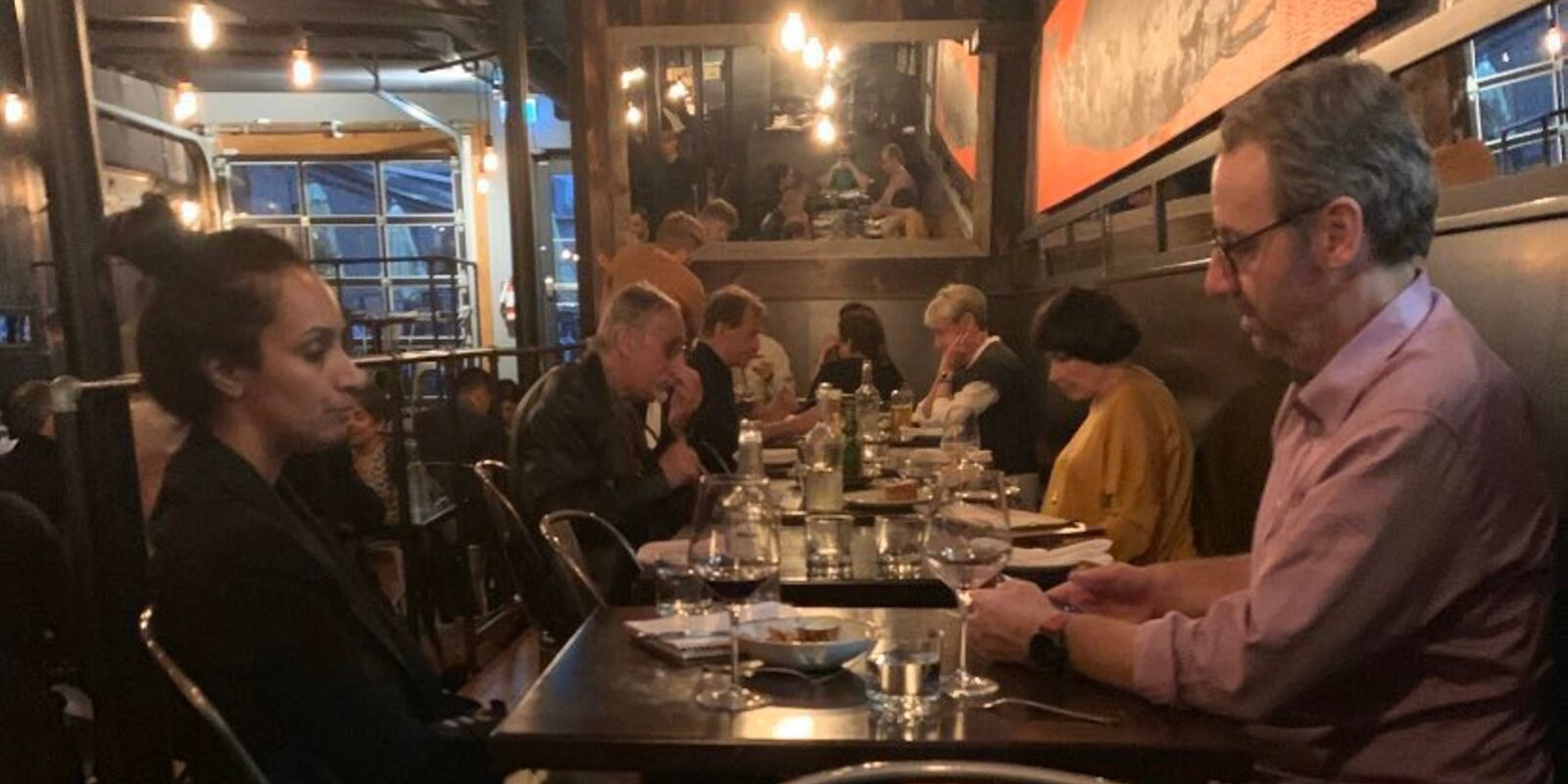 Rumour that the two were at dinner together swirled on social media after Conservative operative and pollster Nick Kouvalis tweeted out a picture claiming a source sitting next to the pair spotted them at Ottawa’s Whalesbone on Elgin St. for buck-a-shuck oyster night.

“[Gerald Butts] is busy busy busy. I’m told this is happening, right now, at WHALES BONE with…. Someone who looks awfully like an upcoming DEBATE MODERATOR, [ALTHIA RAJ]???? Is that you?” tweeted Kouvalis.

Ottawa criminal lawyer James Bowie tweeted pictures of Whalesbone looking closed for renovations, saying, “It is across from my office, near the courthouse. It’s been closed since last week. Renovations.”

However, upon closer inspection of the sign, it says the front is undergoing renovations so customers can still be served at the back area of the restaurant.

Some online observers noted the restaurant’s outward appearance of looking shuttered would make it an ideal clandestine meeting spot in public. (Bowie promptly deleted his tweet after Kouvalis told him to look closer at the sign.)

The Post Millennial confirmed with sources that Raj and Butts were indeed at Ottawa’s Whalesbone at 7 p.m.

Raj is one of five journalists who were selected to moderate the English official leaders’ debate taking place on Monday, Oct. 7.

Butts resigned as Trudeau’s top advisor in the middle of Feb. for his role in the SNC Lavalin scandal in which he, Prime Minister Trudeau and others pressured former Attorney General Jodie Wilson-Raybould to consider a deferred prosecution—something legislatively created by Trudeau’s government after being lobbied by SNC Lavalin.

A deferred prosecution would allow for the disgraced engineering giant to not have to go to trial for allegations such as buying prostitutes for murderous dictator Muammar Gaddafi’s son and bribing the Libyan dictator’s family with millions.

It was announced in July Butts had rejoined the Liberals as an election campaign pitbull without the mainstream media really questioning the relatively quick return of a disgraced top aide.

Political observers were concerned Raj and Butts may be colluding in debate prep to give Trudeau a heads up on what the questions will be or what prickly questions to throw at Conservative Leader Andrew Scheer.

Some journalists came to Raj’s defence, saying it’s common practice for journalists to meet with sources.

The commission responsible for selecting debate moderators came under fire when four of the five journalists they selected to moderate the debate have shown favouritism for the Liberals and Trudeau.

Debate moderator Rosemary Barton, one of four anchors on CBC’s flagging flagship news show The National, took a selfie with Trudeau shortly after he got into office—proudly posting it on Twitter—and makes partial remarks in favour of the Liberals such as how the Trudeau government’s large deficits don’t matter or that the RCMP are “just asking a few questions” about the SNC Lavalin scandal investigation. Fellow debate moderator Susan Delacourt has long been a stalwart supporter of Trudeau in her Toronto Star columns and was a Trudeau Foundation mentor in 2016, receiving a $20,000 honourarium.

Raj herself wrote an effusive biography of Trudeau—Contender: The Justin Trudeau Story—in which she repeatedly praised Butts’ intelligence. She’s also repeatedly defended Trudeau in her writing and on national television, as one of CBC’s “At Issue” panellists, for his scandals and government’s failings.

Last week Raj faced a firestorm on Twitter for greenlighting and publishing another HuffPo writer’s hit piece—on a 16-year-old allegation that Andrew Scheer tacitly supported an MP’s homophobic comments in 2003—which didn’t properly quote the response from Scheer’s spokesperson.

The debate moderators were selected by the Canadian Debate Production Partnership (CDPP), which was created by a Leaders’ Debate Commission that the Trudeau government founded in 2018.

The spokesperson for the Leaders’ Debate Commission referred The Post Millennial’s questions of debate integrity to the CDPP.

“…It’s not unusual for political journalists to meet with political sources. We remain confident in all of the debate moderators, all of whom are professional journalists who are working for their respective outlets, as well as with the CDPP production teams on the debates,” said CDPP spokesperson Leon Mar.

So far, Trudeau has skipped a Maclean’s debate and caused the Munk debate to be cancelled because he refused to attend.

Raj and the Liberal Party of Canada did not respond to requests for comment.