"As Deputy Chief, it is apparent to me that the individualized accommodation assessment process and the so called interactive process was a sham because it was predetermined by the Department that no religious accommodation would be accommodated." 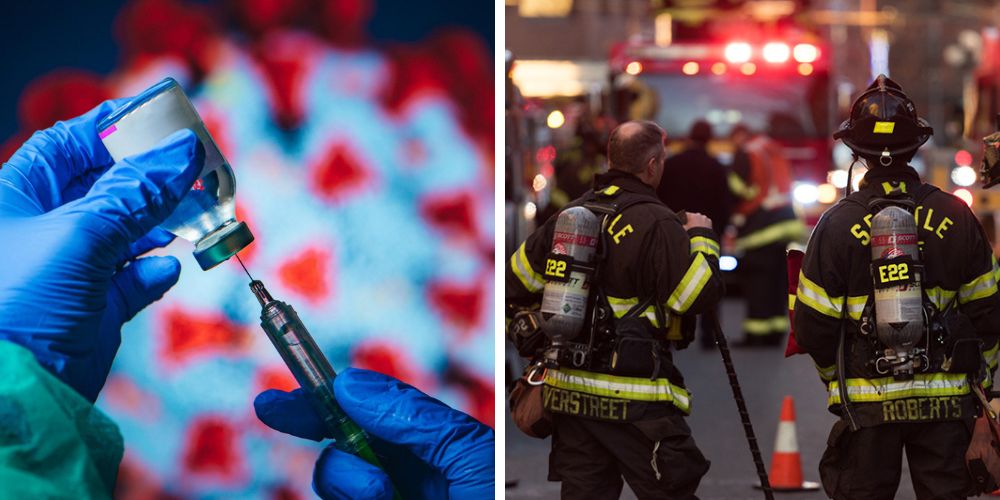 A lawsuit on behalf of a group of Seattle firefighters facing imminent termination due to their refusal to comply with the city’s vaccine mandate has been filed seeking injunctive relief and a temporary restraining order against the city and Fire Chief Harold Scoggins to prevent any more members of the department from being fired because of the policy.

According to documents obtained by The Post Millennial, the plaintiffs are three Seattle firefighters facing imminent termination because although the city through the department "acknowledged each of their sincerely held religious beliefs preventing them from receiving vaccination against COVID-19," they were still denied accommodations for their exemptions and "all face imminent termination" despite "the most recent Center for Disease Control (CDC) Guidance, and the City’s recently changed policy reflecting that guidance."

The documents filed Tuesday also stated that "based upon whistleblower reports, that the Department had no intention of accommodating religious objectors in any event."

The plaintiffs submitted religious exemptions and according to the documents the department found that "each of the Plaintiffs’ requests for religious exemptions was based on a sincerely held religious belief," as stipulated by the mandate, yet "claimed that it was unable to offer accommodations, asserting an undue burden because the unvaccinated posed a health risk to others."

Since that time, the plaintiffs noted in the documents that the "CDC has acknowledged that the mandated vaccine does not stop infection or transmission of the virus," and "has also changed course and acknowledged natural immunity." The documents included an email from the city that "acknowledged that the vaccines do not stop transmission" on August 31, 2022, which "echoing the latest CDC Guidance, and making no distinction between vaccinated and unvaccinated individuals." Additionally, the department cannot claim that "its policy has been successful in stemming COVID-19."

According to a declaration by Deputy Chief and Union President for Local 2898 Thomas Walsh, during the pandemic, before the vaccines were available, the Seattle Fire Department had tens of millions of contacts with the public and only a single instance of transmission.

Walsh, the third highest ranking member in the department also stated that "As Deputy Chief, it is apparent to me that the individualized accommodation assessment process and the so called interactive process was a sham because it was predetermined by the Department that no religious accommodation would be accommodated."

The deputy chief also noted that "despite the termination of all unvaccinated firefighters, the Department had a severe COVID-19 outbreak among its fully vaccinated members and is still dealing with ongoing COVID outbreaks."

Additionally, in December of 2021, "the exact accommodations suggested by the religious objectors (e.g. masking, daily testing, isolation, and social distancing) were implemented by the Department."

Other fire departments in the state including Pierce Central Fire and Rescue, long ago accommodated all religious objectors.

Washington state recently changed course and is no longer requiring Covid boosters for state employees, yet is still requiring they get the original doses of the vaccine. The city mandate was based on the state’s mandate.

According to the court documents, "Wholly independent from the lack of scientific basis to continue its arbitrary and capricious policy, it is now apparent that the Fire Department, and the City of Seattle at large, never intended to accommodate any firefighters found to have sincerely held religious beliefs."

The documents cited a meeting held on Microsoft Teams hosted by Adrienne Thompson from the mayor’s office, where she was asked to provide "written confirmation about the city’s policy, as revealed to city HR leads/staff on 10/13/21, that no accommodations would be given by the city for any religious exemptions."

“Adrienne stated, that, 'After talking to the attorneys, we are not comfortable providing such a statement,'" according to Walsh’s declaration and that "The City’s, and the Department’s de facto policy is clear: no accommodations would be offered to those with a religious objection."

At that point, other participants then offered examples of employees where this might almost apply such as drawbridge tenders, late/overnight building maintenance individuals and the discussion also included that "all city department heads should be consistent and unanimous in this position, regardless of work situations, environment, etc."

According to the documents, the department "cannot claim an economic burden" because it "faces 'unprecedented staffing shortages' resulting in delayed response times and massive overtime payments."

According to internal documents obtained by The Post Millennial, as of July, there are "more than 110 vacant positions for uniformed SFD members" in the department, and the shortfall is expected to last "12-18 months" at minimum. The SFD staffing crisis, which also followed vaccine mandates, is so dire that one whistleblower said, "someone is going to get killed," and is worried the city will not take action to solve the problem, even if the victim is a Seattle firefighter.

The city and the department were not available for comment.