The Florida law in question is Governor DeSantis' legislative proposal to "Stop W.O.K.E. Activism and Critical Race Theory in Schools and Corporations." 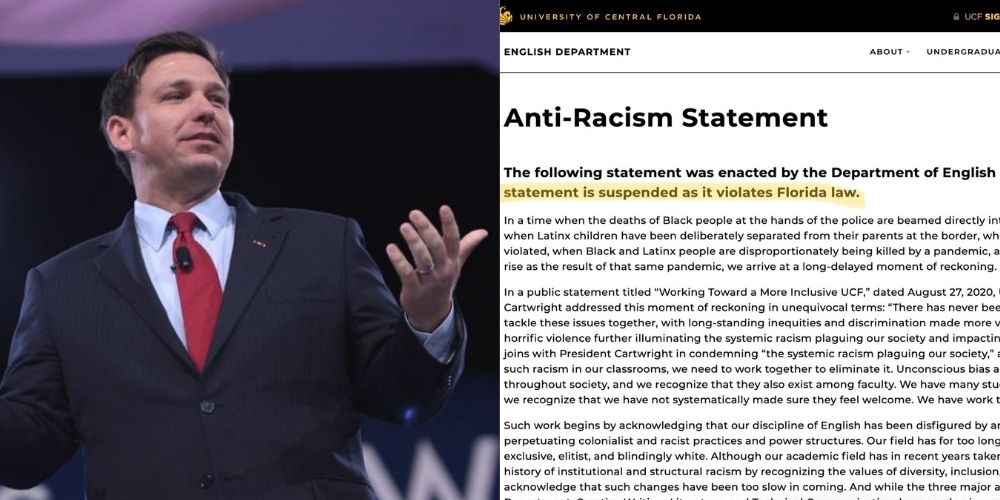 The University of Central Florida's English Department suspended its anti-racism statement on July 7 and then moments later unsuspended it.

Orlando Sentinel reporter Skyler Swisher posted pictures of the college's original suspension which read, "As of July 1, 2022, the statement is suspended as it violates Florida law."

The Florida law in question is Governor DeSantis' legislative proposal to "Stop W.O.K.E. Activism and Critical Race Theory in Schools and Corporations."

According to the Florida government's website the "Wrongs to Our Kids and Employees (W.O.K.E.) Act" is designed to "give businesses, employees, children and families tools to fight back against woke indoctrination."

The college's anti-racism "statement" was "enacted by the Department of English in 2021," and its original language was unmolested even when the suspension was added and then subtracted.

On Twitter, Swisher said it's "unclear" why the college added the suspension language only to remove it the same day.

Some of the anti-racism promises the school made were:

"Organizing speakers and workshops about equity, justice, and inclusion."

"Holding ourselves accountable by implementing an assessment outcome to measure our success in achieving an anti-racist curriculum."

And making sure "literature and literary history are appropriately understood and contextualized in matters of race and white supremacy."

And the school noted that "Unconscious bias and white fragility are pervasive throughout society."

"I view wokeness as a form of cultural Marxism," DeSantis said in response to the type of CRT/anti-racism statements at the Central University of Florida, along with "They want to tear at the fabric of our society and our culture"

DeSantis noted that CRT and anti-racism at the institutional level is "state-sanctioned racism" designed to teach American kids "to hate our country or to hate each other."