Gaetz said that the requested military budget of approximately $773 billion, should to be used to correct "blown calls" made by military brass in the last year. 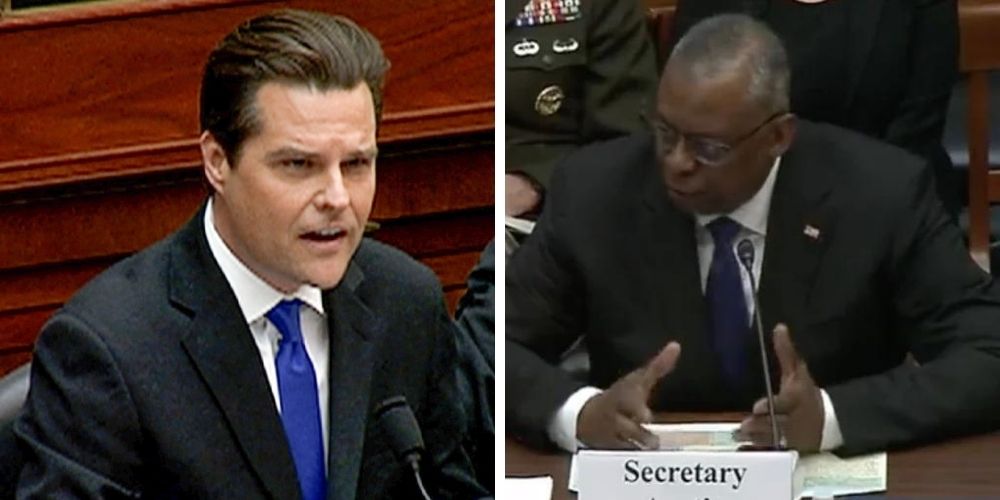 Gaetz said that the requested military budget of approximately $773 billion, should to be used to correct "blown calls" made by military brass in the last year.

Gaetz asked, "You guys have been blowing a lot of calls lately on matters of strategy, Mr. Secretary. You guys told us that Russia couldn’t lose, you told us the Taliban couldn’t immediately win, and so I guess I’m wondering, what in the $773 billion that you’re requesting today is going to help you make assessments that are accurate in the face of so many blown calls?"

Austin replied, "You’ve seen what’s in our budget. You’ve seen how the budget matches the strategy and so I’ll let that speak for itself."

The pair began talking over each when Gaetz added, "We’re behind in hypersonics, we failed to deter Russia. Last year, China…" and then was cut off when Austin interrupted to ask Gaetz what he thought would be the best way to evaluate "hypersonics."

Gaetz replied, "Your own people brief us that we are behind and China is winning. Are you aware of the briefings we get on hypersonics?" prompting a visibly annoyed Austin to reply, "I’m certainly aware of briefings we give to Congress."

Gaetz added, "We got time to embrace Critical Race Theory at West Point, to embrace socialism at the National Defense University, to do mandatory pronoun training..."

Austin then said, "The fact that you’re embarrassed by your country? I’m sorry for that," when Gaetz interrupted and retorted:

"I’m embarrassed by your leadership! I’m not embarrassed for my country. I wish we were not losing to China … that is so disgraceful that you would sit here and conflate your failures with the failures of the uniformed service members."

Gaetz concluded, "You guys said that Russia would overrun Ukraine in 36 days, you said the Taliban would be kept at bay for months, you totally blew those calls and maybe we would be better at them if the National Defense University actually worked a little more on strategy and a little less on wokeism."