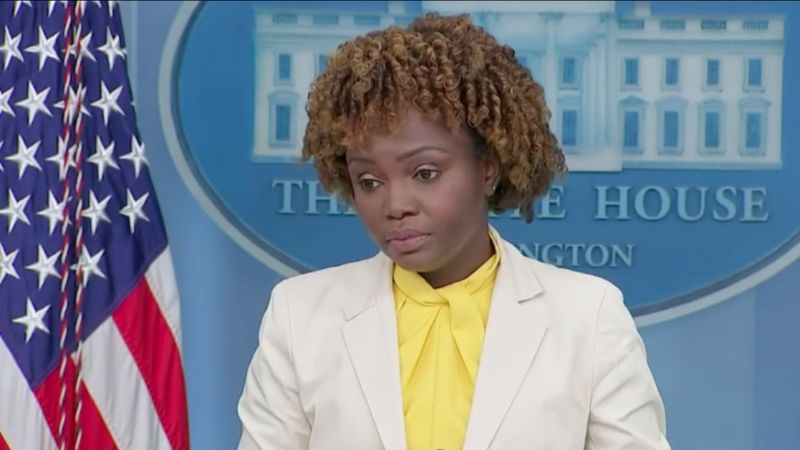 "So it's a lot more nuanced than that, right?" Jean-Pierre began.

"Peter, you know this, there have been global challenges that we have all have dealt with — when I say all, meaning other countries — as well have dealt with since the pandemic. there has been a pandemic and there's been Putin's war, and Putin's war has increased gas prices at the pump.

"We have seen that over the past several months," she continued. "And what the President was able to do, he took some historic steps. When you think about the Strategic Petroleum Reserve, and making sure that we were able to do everything that we can to bring that cost down for American families, give them a little bit more of a breathing room, and we saw that."

"We saw that every day this summer, over—saving American families, over $1 per gallon. And so that is what the President's going to continue to stay focused on, our American consumers. How do we continue to keep prices down? That's why we did the inflation Reduction Act. That's why we talk about the CHIPS act. All of these things are going to help Americans here in this country."

According to the American Automobile Association, gas prices are currently at $3.80 per gallon, which is down from the historic high of $5.01.

Despite the Biden administration’s celebrations over the drop in gas prices, they fail to acknowledge that gas prices are up from last year, which was $3.20, and up from the average gas prices under the tail end of the Trump administration, which according to GasBuddy, a gas price tracking software, was around $2.30 per gallon.

The Biden administration has continued to blame "Putin’s price hike" for the increase in gas prices, stating that gas prices only really started to jump after Russian President Vladimir Putin invaded Ukraine in February of this year.
ADVERTISEMENT
ADVERTISEMENT
Karine Jean-Pierre