In the much anticipated questioning, Hawley interrogated Jackson as to who she was more concerned with when issuing sentences for child pornographers, the victims or the perpetrators. 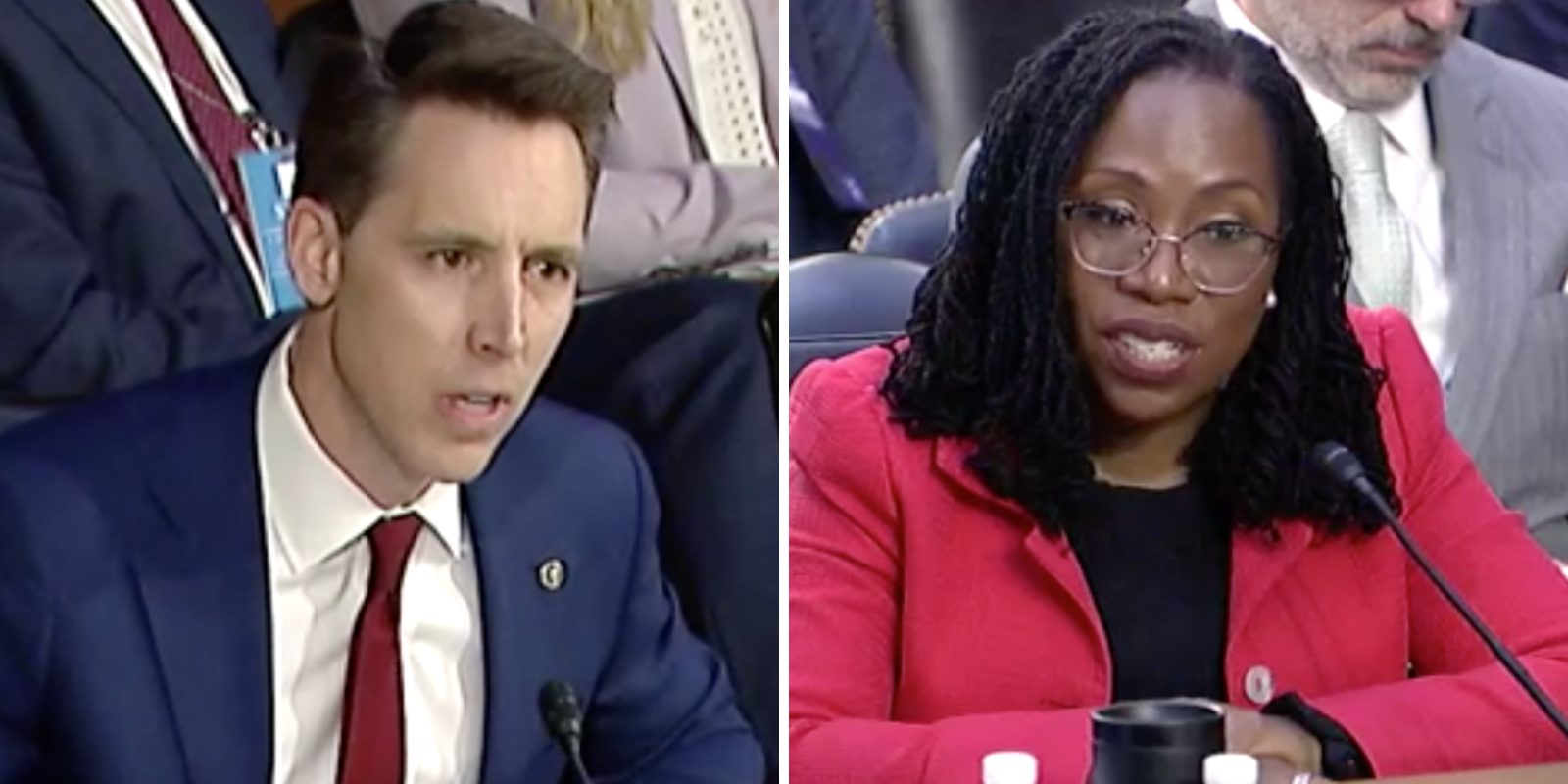 Senator Josh Hawley finally got the chance to question Judge Ketanji Brown Jackson on her lenient sentences for child pornographers over the course of her career. As Jackson sat before the US Senate for the second day of confirmation hearings after being nominated by President Biden, the two got down to cases.

In the much anticipated questioning, Hawley interrogated Jackson as to who she was more concerned with when issuing sentences for child pornographers, the victims or the perpetrators. In the case of one young man, where sentencing guidelines would have kept him behind bars for multiple years and Jackson sentenced him to only three months, Hawley asked "Is he the victim here or is the victim the victim?"

"In each of the seven," Hawley said after noting that in many cases judges do not have that kind of sentencing discretion, "you chose to depart both from the federal guidelines and also from the government's the prosecutors recommendation." And he brought up cases, specifically the United States v. Hawkins.

Videos included those showing  a 12-year-old male committing a sexual act, about which Hawley said. "I'm not gonna I'm not gonna read exactly what it was," because of the graphic nature of the content. There was another video showing an 8 year old "committing a sexual act," and still others, showing 11-year-olds, the rape of children by adult males, and "very lengthy and include numerous images, numerous views, sometimes collages, sometimes multiple victims, you see the act and progress, the government goes on to describe some of the masochistic images," Hawley said. There were 17 videos in all.

Hawley noted that the federal guidelines recommended 97 to 121 months, or up to 10 years. These guidelines were written by Congress in the Protect Act of 2003.

Hawley continued to quote her, "I don't feel that it's appropriate to increase the penalty on the basis of the number of images or prepubescent victims, meaning little kids, as the guidelines require, because these circumstances exist in many cases, if not most, and don't signal an especially heinous or egregious child pornography offenses," he said, finishing the quote.

"I just want to ask you about that because I just have to tell you, I'm having a hard time wrapping my head around it. We're talking about 8 year olds and 9 year olds and 11 year olds and 12 year olds. He's got images of these the government said added up over 600 images, gobs of video footage of these children, but you say this is not signal a heinous or egregious child pornography offense. Help me understand that what word would you use if it's not heinous or egregious? What how would you describe it?" Hawley asked Jackson.

Jackson expressed her agreement with Hawley that the crimes, and the images, were egregious, heinous, and horrifying. As to sentencing, she said that "the guidelines, as you pointed out, are being departed from even with respect to the government's recommendation. The government, in this case and others, has asked for a sentence that is substantially less than the guideline penalty. And so what I was discussing was that phenomenon: that guidelines in this area are not doing the work of differentiating defendants, as the government itself indicated in this very case. And so that's what I was talking about.

"But I want to assure you, Senator, that I take these cases very seriously. That these cases include the notion, by many defendants, that the folks at issue that the defendants themselves, are collecting these images on the internet. There are terrible things that have happened but they are not involved, say the defendants they're not focused on you know, what is actually happening to the children. And so part of my sentencings was about redirecting the defendants' attention. It's not just about how much time a person spends in prison. It's about understanding the harm of this, this behavior it's about all of the other kinds of restraints that sex offenders are ordered rightly to live under at the end of the day. Sentences in these cases include not only prison time, but restraints on computer use, sometimes for decades, restraints on ability to go near children, sometimes for decades. All of these things judges consider in order to affect what Congress has required, which is a sentence that is sufficient but not greater than necessary to promote the purposes of punishment."

Hawley disagreed slightly with that assessment, saying that "Congress wanted you to choose between 97 and 121 months. That's what Congress wanted," noting that the Supreme Court had ruled that sentences were up to the discretion of the judge.

"My only point in raising that is just to say that question in these cases, and you use your discretion to sentences that you did, let me ask you about some of the things that that you said because you said this this morning, and I appreciated how you want to direct the defendants you want to get them to own up to what they've done in these cases. I thought that was powerful. And I thought it was right.

"But let me just ask you about you said to this defendant, you said this defendant for whom you sentenced to only three months in prison: 'your collection... at the time that you were caught was not actually as large as it seems.' The government felt the need to respond to the record. They said 'the government doesn't believe that it's appropriate just disregard the number of images, that the number of images can be appropriate, and that in this case the defendant has an extremely large collection of child pornography. But you disregarded that. You also told the defendant, you said this, 'this seems to be a case where you were fascinated by sexual images involving what were essentially your peers.' And then you wen ton to say that the defendant was merely trying to satisfy his curiosity.'"

Hawley quoted Jackson as speaking to the 18-year-old defendant about how he was essentially looking at images of people "not much younger" than he was at the time. He didn't see how the young man, at 18, could be "peers" with 8-year-olds.

"What I recall with respect to that case, is that unlike the many other child pornography offenders I'd seen as a judge, and then I was aware of in my work on the Sentencing Commission, this particular defendant had just graduated from high school, and some of, perhaps not all when you were looking at the records, but some of the materials that he was looking at were older teenagers, were older victims. And the point, Senator, is that you said before, the probation office is making recommendations and they do so on a case by case basis. That is what Congress requires..." Jackson said.

"Sentencing is a discretionary act of a judge," Jackson said. "But it's not a numbers game. It's not." Jackson referenced the Supreme Court's ruling that judges have discretion at sentencing.

Hawley continued asking about this specific case, bringing up records of the case. "You also said to this individual who is an adult, who was tried as an adult, you also said to him, besides saying that you felt his victims were his peers. You also said 'there's no reason to think that you are a pedophile.'" And that this was a reason that Jackson gave for only sentencing the offender to three months.

"And then you said and this is something, I really need your help understanding. Then you apologize to him. And I just have to tell you, I can't quite figure this out," Hawley said. "You said to him, 'this is a truly difficult situation. I appreciate that. Your family's in the audience. I feel so sorry for them, and for you. And for the anguish this has caused all of you. I feel terrible about the collateral consequences of this conviction. And then you go and say sex offenders are truly shunned in our society.'

"I'm just trying to figure out," Hawley said, "is he the victim here or are the victims, the victims?" Hawley noted that there was a victim impact statement in this case, though it was not read into the record.

"I remember in that particular case," Jackson said, "I considered it to be unusual, in part for the reasons that I described. I remember in that case that defense counsel was arguing for probation, in part, because he argued that here we had a very young man, just graduated from high school. He presented all these diplomas and certificates and the things that he had done and argued, consistent with what I was seeing in the record, that this particular defendant had gotten into this in a way that was I thought inconsistent with some of the other cases that I had seen."

Jackson explained the role of a sentencing judge, saying "And so my my only point to you is that judges are doing the work of assessing, in each case, a number of factors that are set forward by Congress, all against the backdrop of heinous criminal behavior. The guidelines are no longer mandatory.

"Congress has not corrected, as you would say, the Supreme Court's determination about that Justice Scalia's decision, that the guidelines are not mandatory. Congress has not said that. And Congress has given judges factors to consider.

"With all due respect," Jackson said, "my article is now in the record, people can read it, and they can see that I was evaluating these laws not to determine their constitutionality... but to talk about the ways in which courts make determinations about the character of law and all of the consequences that follow from them. In law school, I had not had any experience in terms of the criminal justice system and I was doing what law students do, which is seeking to analyze in a creative way new legislation.

"With respect to Mr. Hawkins, I was doing what judges do, which is look at the statute, 18 USC 3553 A, exercise discretion as Congress has required us to do, take into account all of the various aspects of a particular case, and make a determination consistent with my authority, my judgment and understanding fully the egregious nature of the crime.

"As you said, even the prosecutors in these cases are not recommending guideline sentences. The probation office, which is an independent authority, looking at these cases, and the facts related to them, are not recommending guideline sentences. This is a particular area where the commission has seen an enormous amount of disparity and is in fact asked Congress to come back and address ,to help judges who are looking at these cases to be able to rely on the guidelines."

"Which Congress has declined to do," Hawley said.

"Senator in that case, we have the statute that Congress has enacted concerning penalties and we have judges who are doing their level best to make sure that people are held accountable as they need to be in our society in a fair and just way," Jackson said.