The Halton District School Board shot to international fame for failing to prevent Kayla Lemieux, a biological male teacher who identifies as female, from wearing enormous fetish breasts in the classroom. 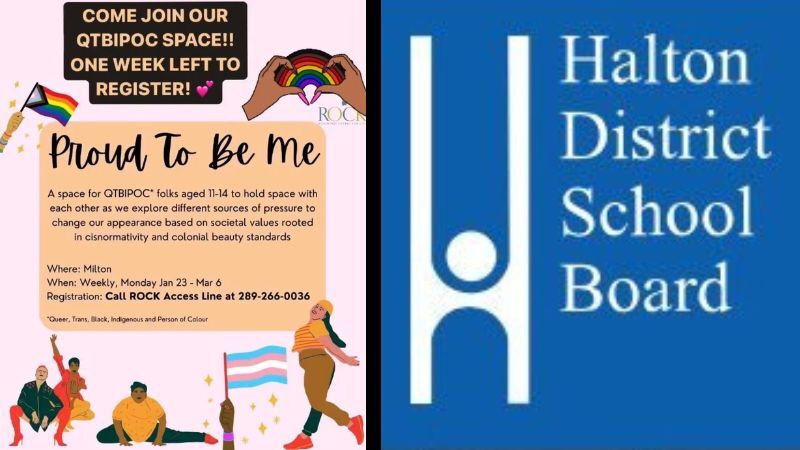 The Halton District School Board, which shot to international fame for failing to prevent one of its bioligical male teachers from wearing enormous fetish breasts in the classroom, is encouraging "QTBIPOC" students to sign up for an event that explores "cisnormativity" and "colonial beauty standards."

The unusual initialism stands for "Queer, Trans, Black, Indigenous, Person of Colour" and is notable for its exclusion of lesbian, gay, and bisexual (LGB) people.


The "Proud To Be Me" event is described as "a space for QTBIPOC folks aged 11-14 to hold spaces with each other as we explore different sources of pressure to change our appearance based on societal values rooted in cisnormativity and colonial beauty standards."

The group will meet weekly from Jan 23 to Mar 6 in Milton, Ontario.

Many members of the LGB community have been campaigning for the LGB to split from the TQ+ for some years now, so the new initialism is likely to be welcomed. The two groups have little in common and are in fact in direct conflict with each other on core issues such as the meaning of the word homosexual.

The LGB define homosexual as being same-sex attracted, whereas the TQ+ have redefined it to mean "same-gender" attracted. This opens the door for heterosexual males who identify as women and therefore believe themselves to be lesbians to demand inclusion in lesbian spaces. Needless to say, many actual lesbians are less than pleased by this change.

Some people took to Twitter to question the appropriateness of the image used in the flier advertising the event to 11-year-olds, which depicts one individual with red high heels and stockings.

This is the same school board that defended the right of trans-identified teacher Kayla Lemieux to wear gigantic prosthetic breasts that can only be purchased from specialist fetish stores while teaching shop class. The HDSB is currently drawing up a new dress code policy that will force Lemieux to leave the fetish gear at home, but only after months of pressure from parents and the threat of legal action.
ADVERTISEMENT
ADVERTISEMENT
HDSB