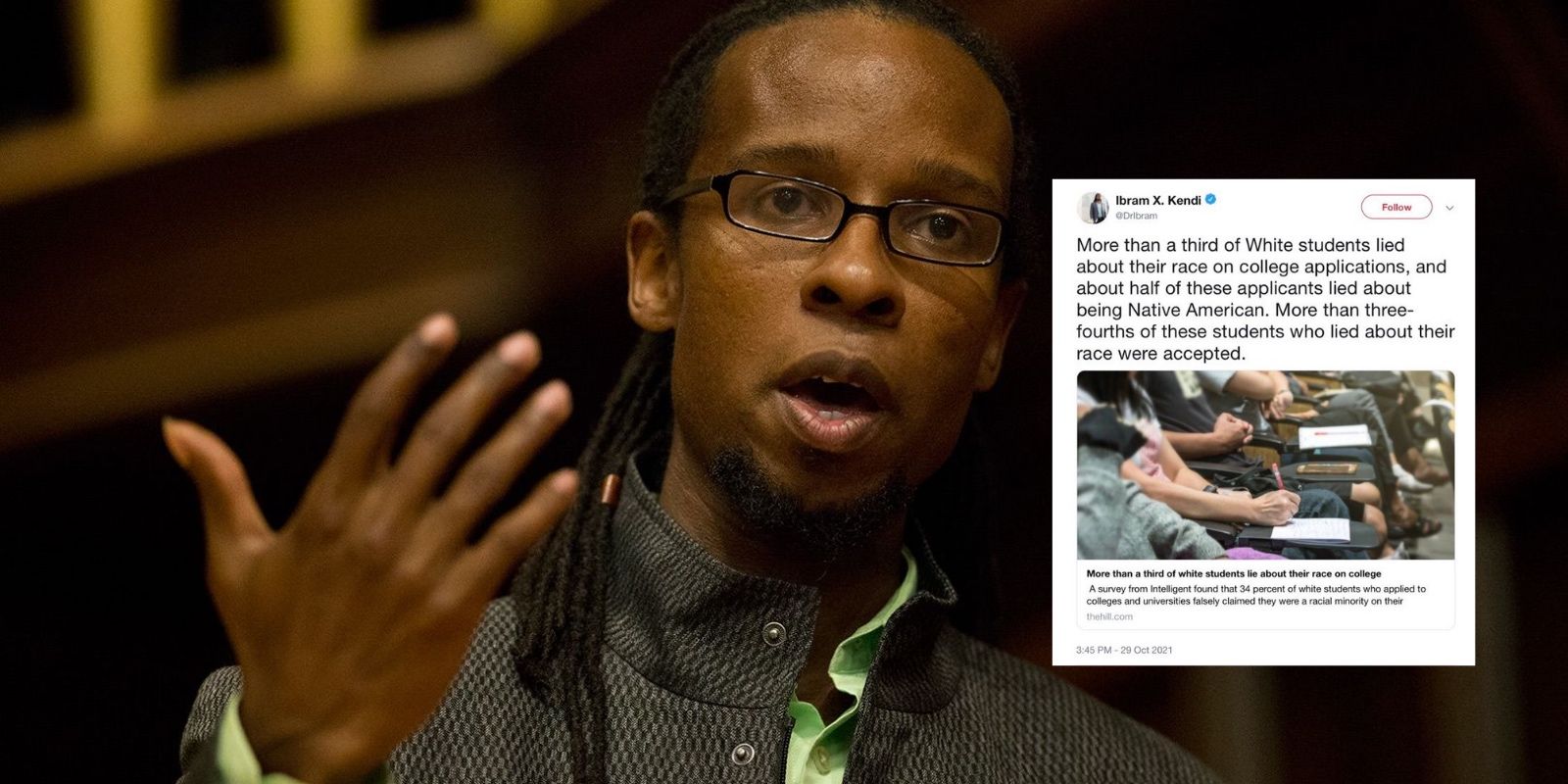 Author and activist Ibram X. Kendi, who upholds the ideas that white privilege is rampant in American culture and systemic racism keeps minorities in states of oppression, shared an article on Twitter that revealed that "more than a third of white students lie about their race on college applications," according to a survey.

Kendi has said that America is a "slaveholders" republic. And wrote a children's book about how to teach babies to be "anti-racist."

But if white privilege is so prevalent and persuasive, why would white kids feel the need to disguise their whiteness in order to gain admittance to college and aid to help them attend? Could it be that these white students felt that as opposed to giving them an edge, their whiteness was a hindrance to admittance?

"Thirteen percent," The Hill reports, "falsely marked that they were Latino, while 10 percent falsely claimed to be Black. Nine percent of those surveyed lied that they were Asian or Pacific Islander." Of these students who checked identity boxes to which they were not entitled, 85 percent "believe that falsifying their racial minority status helped them secure admission to college."

The numbers further show that 48 percent of those lying about their race were white male students, compared to only 16 percent of white female students.

Kendi presumably shared the story before he realized that instead of holding up his ideas about race and society in the US, it could be evidence of exactly the opposite of his views, which would be likely why he deleted it.

If white privilege is such a decisive factor, then why do white students feel that their applications would do better if they pretended to be something other than white, and why would those applications be so successful? "About 3 in 4, or 77 percent, of white applicants who faked minority status on their applications were accepted to those colleges," The Hill reports.

The fact that Kendi posted then deleted the tweet raised red flags about his ideology. Political writer Chad Felix Greene said that Kendi's comment was "collapsing your entire worldview into a giant sinkhole." Kendi then blocked him.

Alex Griswold wrote "[that feeling when] you accidentally blow up your entire life's work in a tweet and have to delete."

While Tablet magazine's Noam Blum wrote that "'White kids are lying about being black so they can get into college' doesn't make the point Kendi thinks it does."

Journalist Andy Ngo pointed out the absurdity of thinking that white students feeling like they would have a better chance getting into college—and likely being right—does not prove that white racial supremacy is paramount in American society.

Paul Rossi, who famously left his teaching position at an elite New York private school rather than be compelled to teach or succumb to tenets of critical race theory, wondered "why one would do such a thing in our racist society [if] it's so advantageous to be considered white?"

The Post Millennial's contributing editor Ian Miles Cheong had a similar perspective, saying that white people would lie about being white because they know "that people of color are socially privileged over whites in almost every regard."

Kendi has made an entire career on telling America that white people are privileged above all other races in the US, are in control of the power structures, and have more benefits than other racial groups.

Then he shared an article, and a comment, showing that young white people feel that their race is in fact a disadvantage to achievement, and realized, only too late, that this blew up the basis for his life's work.

At least the internet never forgets.