"Happy Pride. We have bandanas and lube," the drag queen said, as children in attendance watched the float go by. 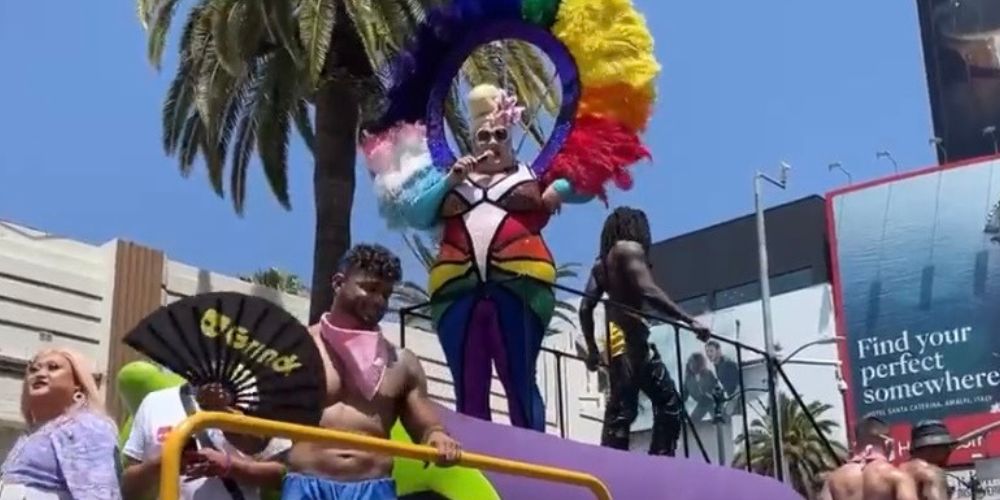 In the latest shocking displays from "Pride Month" events, a drag queen offered lube to a crowd full of children attending the Pride Parade in Los Angeles on Sunday.

The drag queen, who was dressed in an eccentric costume consisting of rainbow feathers and a tight bodysuit, stood on top of a giant eggplant emoji and offered the sexual lubricant to the crowd, according to a video captured by Turning Point USA contributor Drew Hernandez.

"Happy Pride. We have bandanas and lube," the drag queen said, as children in attendance watched the float go by.

Another shocking video from Los Angeles Pride in Hollywood, California, which is presented by TikTok this year, shows a parent forcing her little boy to watch grown men "twerk."

In the video, the little boy turned his back towards the crowd after he appeared to be extremely uncomfortable with the LGBTQ individuals sexually dancing in front of him, but his mother turned him around and forced him to watch.

"CHILD ABUSE: A woman forces a boy against his will to watch the LA PRIDE March as LGBTQ attendees twerk here in Hollywood CA," journalist Drew Hernandez posted to Twitter.

The official 52nd annual Pride Parade of Los Angeles kicked off on Hollywood Blvd around 10:30 am with a topless transgender woman riding his bike down the route waving to children.

"DISTURBING: Pride LA here in Hollywood CA kicks off with a topless individual waving to little children in the crowd," Hernandez reports.

The event's website states that LA Pride 2022 will feature "over 130 contingents of marchers, performers, nonprofits, celebrities, and the businesses that proudly celebrate their LGBTQ+ employees."