In a video posted on Instagram, students can be seen tightly packed together as they embrace the snowfall while enjoying the company of their friends. 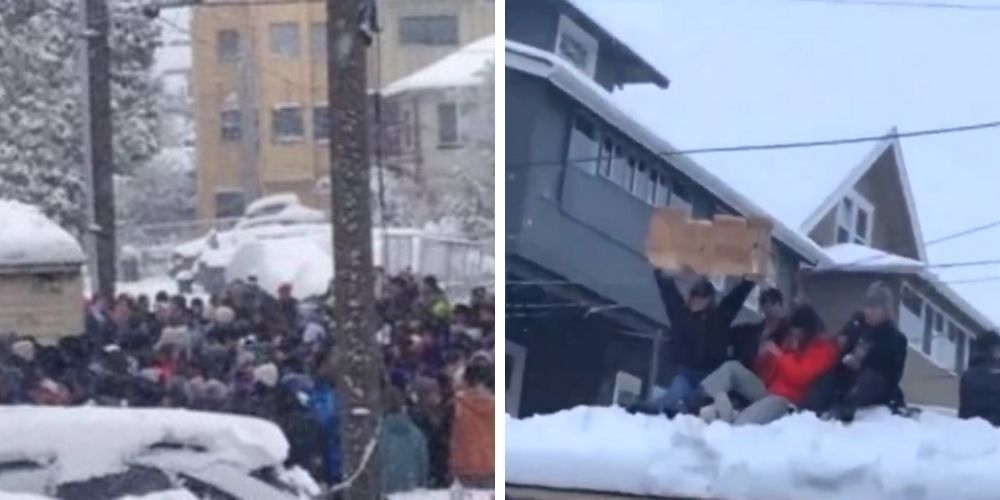 The Greek system at the University of Washington (UW) is under fire after fraternities hosted an outdoor party in the midst of the coronavirus pandemic during last weekend’s snowstorm in Seattle. Leftist students are on a mission to abolish Greek Row after videos surfaced across social media showing the party’s high attendance, while failing to implement proper COVID-19 safety precautions.

In a video posted by Smirk_UW on Instagram, students can be seen tightly packed together as they embrace the snowfall while enjoying the company of their friends.

The caption on the video reads "comment below your thoughts on Greek Row’s repetitively selfish and hazardous behavior," which ultimately led to a social media frenzy where students actively sought to 'abolish' Greek Row and suspend student involved.

"It’s okay we all got tested in August," said a sign that a student showcased while partying on a rooftop.

The University of Washington has been shut down since last spring after COVID-19 swept through campus. The university still requires a portion of its students to live on campus despite only offering remote classes, with the exception of a few in-person classes.

A vocal portion of the UW student body population took to social media to share their frustrations about the ‘blatant disregard’ for their community, even going as far as creating a petition to suspend students who attended the gathering.

The students who were outraged with their fellow peers received a sliver of justice after Student Life at the University of Washington sent out a letter to students that they were going to be seeking disciplinary action for those involved.

"The large gathering that took place in an alleyway north of campus this past Saturday did not live up to the most basic health standards to which the University of Washington holds our students and community members," said Vice President of Student Life Denzil Suite in a letter sent to students.

The letter emphasized many of the surges in outbreaks were from the Greek community.

"A large group of students, including many from the Greek community, flagrantly disregarded state, local and UW health guidance and restrictions with a large, outdoor gathering. Social media posts and formal complaints from other students show hundreds of students packed together, without face coverings, for extended periods. We are deeply disappointed that so many UW students would choose to endanger not only themselves and those in our own community, but potentially a much wider circle of people," said the VP of Student Life.

"The University is also initiating an investigation to hold accountable those organizations and/or individuals who initiated and participated in this event. Those found to have violated the UW Student Code of Conduct are subject to disciplinary action. As a University community we will not tolerate callous disregard for public health guidance, which endangers not only fellow Huskies, but members of the neighborhood and community at large."

Those involved in the 'reckless gathering' are now being asked to self-isolate until February 28 with the University encouraging them to get tested as well.