"But maybe it's easier to act like a public bathroom is a sacred place than criticize the fact that Sinema decided to hide from her voters like a coward," Jezebel staff writer Ashley Reese argues. 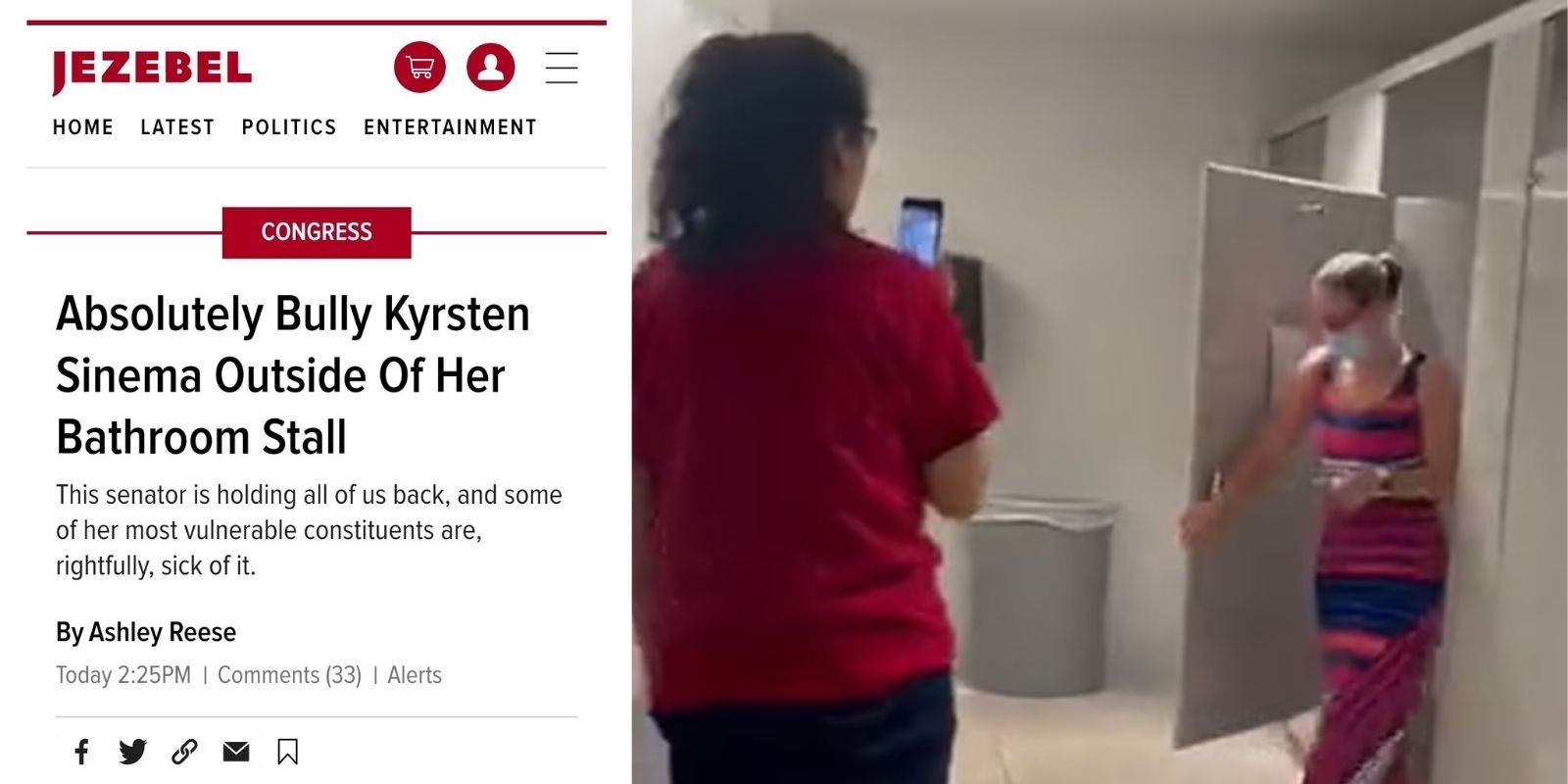 High-profile "feminist" website Jezebel has called for the targeted harassment of Sen. Kyrsten Sinema (D-AZ). The senator was followed into the bathroom by a group of immigration activists who had accosted the Democrat lawmaker in her classroom while she was teaching at Arizona State University over the weekend.

In the Jezebel piece, titled "Absolutely Bully Kyrsten Sinema Outside Of Her Bathroom Stall," the op-ed argues that the senator is "holding all of us back" and some of Sinema's most vulnerable constituents are "rightfully" sick of it.

Jezebel staff writer Ashley Reese criticizes the "pearl-clutching" response surrounding the ASU incident and questions the "effectiveness of certain kinds of protest" that she contends will "always be up for debate."

Reese's language mirrors the writings of "How To Blow Up A Pipeline" author Andreas Malm, who has advocated for the climate change movement to "escalate its tactics," embrace violence, and "move away from an exclusive focus on polite, gentle, and perfectly peaceful civil disobedience."

The Jezebel writer says that few are "providing a more effective and safe alternative" to how the activists at ASU acted.

"They told Sinema, to her face—and through a door—that she was failing them and why." Noting there was no violence or rude language, Reese contends that the confrontation was "Just a few constituents following their representative into a large bathroom to air their grievances."

She questions, "What should they have done instead? Call her office and direct their ire through a receptionist like surely countless Americans do each day? Write her a letter she won't read? Vote her into office again and hope that, this time, she'll deign them important enough to listen to?"

Sinema, whom Reese calls "a political menace," told the persisting activists that she had to leave, but the group pursued the Arizona lawmaker into the women's bathroom. Sinema did not respond to the activists, choosing to lock herself behind a restroom stall. Sounds of toilets flushing were audible in the footage.

Social justice organization Living United for Change in Arizona uploaded the video Sunday of the immigration activists demanding that Sinema defend her opposition to the Biden administration's $3.5 trillion Build Back Better infrastructure bill.

Sinema joined many moderates who criticized the Democratic leadership's decision to pull the bill from the floor Friday to gain additional time for negotiations. Sinema has voiced concern over the Senate budget agenda and its staggering price tag.

"It's no wonder her constituents—who don't understand what the f**k she's doing any better than the rest of us—are piping mad," Reese defends the harassing protesters. "Mad enough to pester her after she finished teaching a class at ASU."

President Joe Biden's plan provides a path to citizenship for illegal immigrants. One of the activists, who identified herself as Blanca, told the senator that she was brought to the United States when she was three-years-old. Blanca's grandparents were deported in 2010 due to Arizona's controversial SB1070 law, one of the strictest anti-immigration laws in the country.

"We need to hold you accountable to what you told us, what you promised us that you were going to pass when we knocked on doors for you. It's not right," Blanca told the Arizona legislator in the campus restroom.

"Given these reactions, one would think that an angry activist kicked open the bathroom door while Sinema was taking a massive dump," Reese writes.

Reese sides with the left-wing instigators who berated the senator in the bathroom stall and denounces Simena's alleged cowardice. She downplays the tension-filled event as a handful of activists who "just sort of stood around" in a public space, "politely but firmly demanding that Sinema to do the job they elected her to do."

"But maybe it's easier to act like a public bathroom is a sacred place than criticize the fact that Sinema decided to hide from her voters like a coward," Reese concludes in the Jezebel essay.

Sinema spoke out on Monday, calling the behavior "not legitimate protest" and alleging that the safe educational environment was "breached" by the conduct.

Neither Biden nor his press secretary had much sympathy for Sinema. "I don't think they're appropriate tactics but it happens to everybody," Biden said at a White House press conference on Monday. "The only people it doesn't happen to are people who have Secret Service standing around with them. So, it's part of the process."

On social media, a Twitter user questioned Reese on the matter of privacy: "So, it is perfectly fine to record someone else in the bathroom without their consent?"

"If they're an ordinary citizen, no. If you open their stall, absolutely not. If they’re an elected official evading basic questions behind a closed door in a large women's bathroom at a public university then yeah I think it's probably fine to record an activist talking to a door," Reese responded on Twitter hours after publication.

"I, for one, am shocked a magazine named after history's most famous pagan witch would betray one of their own women like this," Posobiec commented. "Shocked."

"Jot this down for the next time AOC claims she feared for her life because a Republican gave her a mean look," tweeted "Relatable" host Allie Beth Stuckey.

Reese reacted to the argument by claiming that if constituents followed the New York representative into a public restroom to chide her for stalling important legislation, she would consider the harassment "absolutely fair."

"How dare people follow an elected official they voted for into a large bathroom with multiple stalls and talk about their deported grandma?" Reese tweeted.

Ocasio-Cortez falsely accused Texas Sen. Ted Cruz of "trying to get [her] killed," vowing that she wouldn't attend President Joe Biden's inauguration because she didn't "feel safe" around Republican legislators. The representative further demanded the removal of Republicans in the House and Senate.

"I can tell you that I had a very close encounter where I thought I was going to die," the "Squad" member said in an hour-long Instagram Live video. "I did not know if I was going to make it to the end of that day alive."

The congresswoman has acted like she was on the front line, facing down Trump supporting rioters in the halls outside her congressional office.

But it turned out that Ocasio-Cortez wasn't in the Capitol at the time of the federal breach. She was in another building separate from the chaotic Jan. 6 scene.

Ocasio-Cortez still asserted she's effectively "served in war" and has diclosed she's been attending therapy after "surviving" the Capitol riot.