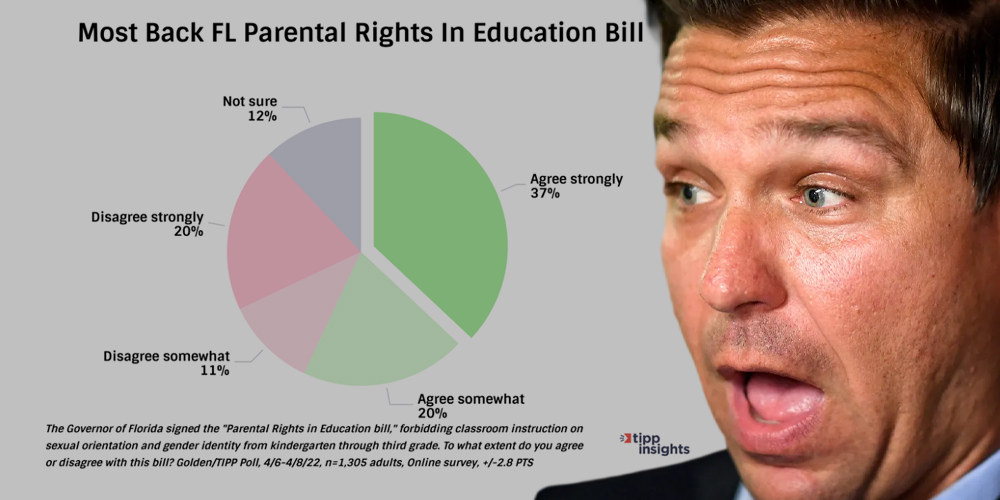 A nationwide survey published last week shows that a large number of US adults are still in support of Florida's Parental Rights in Education bill, despite prolonged retaliation in the time since it was declared law for the state.

1,305 adults were asked the following question by Golden/TIPP pollsters:

"The Governor of Florida signed the 'Parental Rights in Education bill,' forbidding classroom instruction on sexual orientation and gender identity from kindergarten through third grade. To what extent do you agree or disagree?"

57 percent agreed either strongly or somewhat, while 31 percent disagreed. 12 percent said they were still unsure how they felt.

As for the breakdown of sentiment by either political affiliations or ideologies, liberals were the lowest in support at 42 percent agreement. Every other grouping label used in the survey had positive results beyond 50 percent.

Moreover, this particular poll asked respondents whether or not it was appropriate for opponents of Florida's bill to label it the "Don't Say Gay" law. The results show that 47 percent of adults thought it was at least somewhat inappropriate to give the legislation that name, while 38 percent thought it was.

High-profile figures like Mark Hamill of "Star Wars" had previously pushed the narrative that the "Don't Say Gay" law in Florida was a literally interpreted thing.

Regardless, a poll in mid-March asked a similar question to respondents. Even before Governor Ron DeSantis signed the anti-grooming bill into law, more than six in 10 Americans supported it.

Insiders at the Walt Disney Company have recently indicated that the Mickey Mouse empire is still facing backlash over their corporate-wide stance taken against the bill. A tip-off shared to The Dan Bongino Show last week revealed that parents are calling en masse to complain about the direction Disney has taken since the Parental Rights in Education bill was signed.

Video from an "all-hands" meeting at Disney in the wake of the anti-grooming law's passage revealed that staff and executives at the company would be doubling-down on LGBTQ+ content moving forward.

The latest from White House officials, in the case of Secretary of Transportation Pete Buttigieg, is that he believes that Florida's parental rights bill "will kill kids."