Reporting is not targeting, yet for so many liberal journalists in corporate media, journalism and discourse on topics they would want discussed only according to the terms of the going narrative, or would rather not be discussed at all, is nothing more that harassment that leads to violence. 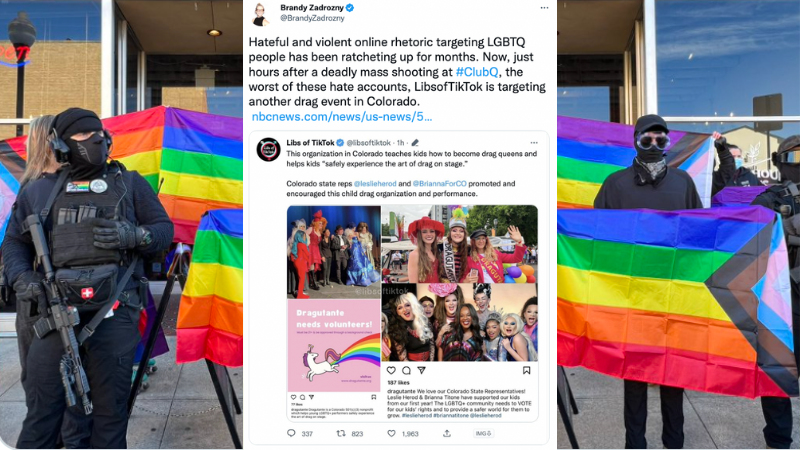 Libby Emmons Brooklyn NY
Nov 21, 2022 minute read
ADVERTISEMENT
ADVERTISEMENT
The liberal about-face on free speech and the free press has been nothing short of astonishing. Those who once declared that freedom of speech, freedom of the press, and freedom of religion were paramount values to America, now routinely seek to silence conversations about ideas that they don't agree with. And the way they do it is insidious, even as they believe, fully, that they are doing the moral and just thing by silencing other journalists and their ideas.

Libs of TikTok has been accused of violence for exposing teachers, authority figures, and activists in their own terms. Account holder Chaya Raichik has been said to incite terrorism for sharing marketing materials for things like drag queen story hour. Matt Walsh has been said to incite violence by asking "what is a woman?" A question that no one on the left wants to answer because they are more concerned with placating males who present as females than with recognizing the reality of biological sex.

Taylor Lorenz, Brandy Zadrozny, and others have called for the silencing of those accounts that report on the prevalence of child sex changes, the hospitals that do these "treatments," and the doctors who drug and operate on young bodies for the purpose of "gender affirmation," which is actually simply in service to critical gender ideology.

Zadrozny claimed that Libs of TikTok has culpability in the shooting at a Colorado nightclub last week in which 5 people were killed, and 18 were injured. Zadrozny, a senior reporter with NBC News, made the assumption, based on her own narrative, and then pointed fingers at Raichik, without proof, without any basis other than her own bias.

"Hateful and violent online rhetoric targeting LGBTQ people has been ratcheting up for months," Zadrozny said. "Now, just hours after a deadly mass shooting at #ClubQ, the worst of these hate accounts, LibsofTikTok is targeting another drag event in Colorado."

In defense of her supposition, she shared a tweet from Libs of Tiktok showing drag queen events for children in the state of Colorado. Libs of TikTok, in her post about the drag shows for kids, noted that the organization hosting the drag performances for child attendees does so in order to "teach kids how to become drag queens and help kids 'safely experience the art of drag on stage.'" The account then noted that Colorado state reps promoted the event.

In her tweet about the drag shows for kids, Libs of TikTok pointed out that they were happening and gave information about local elected leaders that were supporting these events. That's what is called reporting, but to Zadrozky, it's "targeting."

Reporting is not targeting, yet for so many liberal journalists in corporate media, journalism and discourse on topics they would want discussed only according to the terms of the going narrative, or would rather not be discussed at all, is nothing more than harassment that leads to violence.

While these journalists use their platforms to call for the banning of specific accounts, their real goal is to silence ideas, to equate the mere expression of those ideas to hate speech or hate crimes and to make them unprintable, and unspeakable. They seek to frame anyone who does dare speak of them as bigots, racists, and phobes of one sort or another.

These outlets don't only want you to believe that men and women can change sex, but that anyone who says they can't is hateful, and that bringing up the idea that perhaps biological sex is not mutable is hateful in itself.

They are actively creating an environment where questioning why children are being exposed to sexually explicit performances by female impersonators is a hateful thing that only a hateful person would do.

The atmosphere of discourse is such that questioning why minors are prohibited from smoking and voting but not from having abortions and "gender-affirming care" without parental consent is enough to be deemed a harasser, a bigot, touting "hateful" ideas.

The liberal sphere of discourse, once the bastion of our great democracy, is now intent on silencing ideas that counter their narrative and silencing those who express those ideas.

By silencing Libs of TikTok, Matt Walsh, or any of the others, by outright banning ideas and preventing them from being openly discussed, they are undermining their original intents, they have given up the moral authority they seek to gain. And yes, they do this from a place of morality, they believe they are standing on their values.

As the contradictions mount, the values become more and more muddied. Their morality is based on shifting sand, and it does not hold up under scrutiny.

The only way to push back against this, both in discourse and in your own mind, is to know your values. Know what is right. Ask questions, and engage in ideas. Don't let anyone tell you what to think.
ADVERTISEMENT
ADVERTISEMENT
silencing ideas