"It is crucial in this time of public education's decline... that we elevate the voices of all stakeholders in education—not just the chosen, left-leaning few." 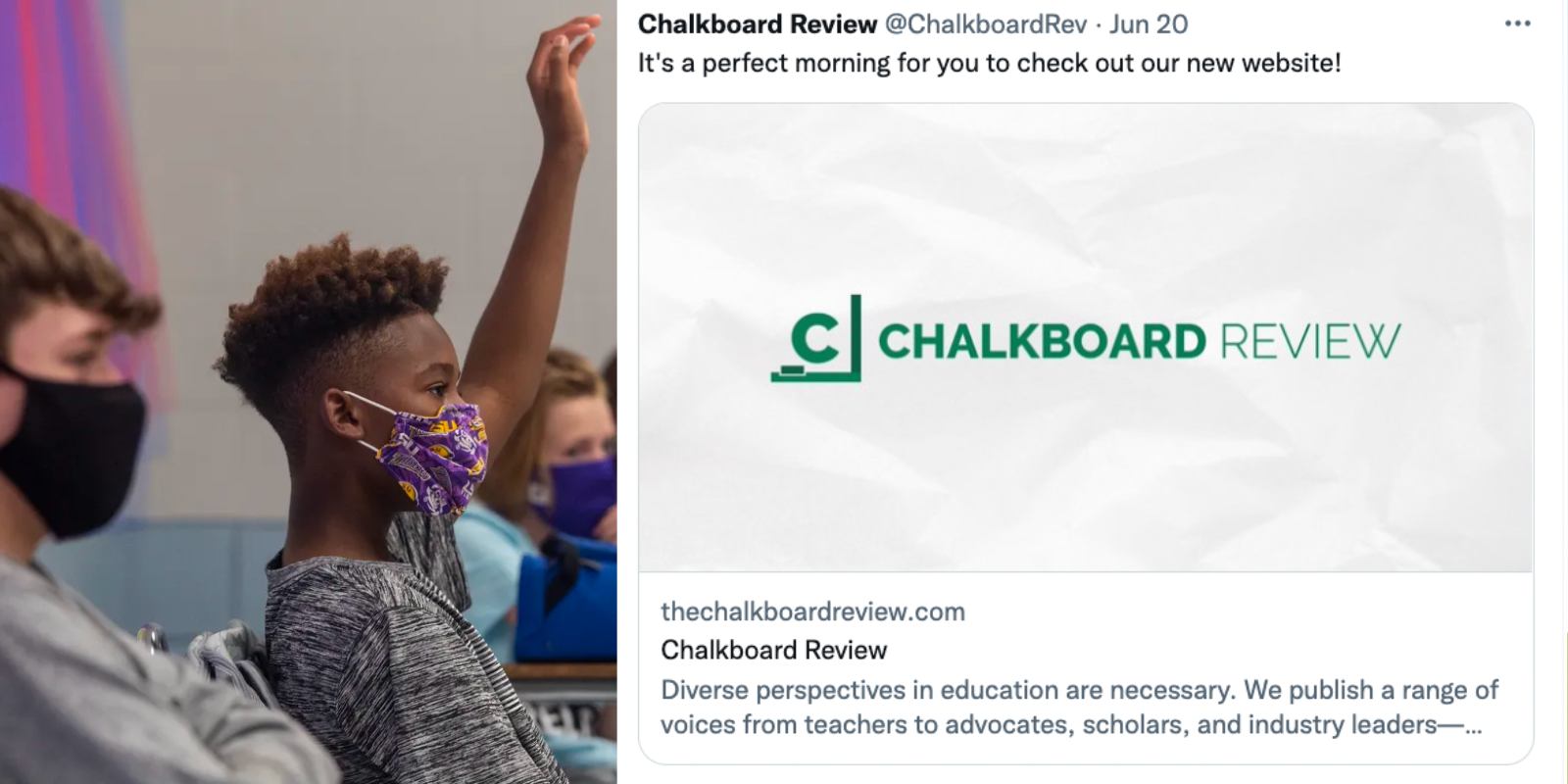 The Chalkboard Review is teaming up with Choice Media to create a platform for independent education news, challenging the hyper-progressive narrative in education and media. The new website counters the severely left-leaning outlets which dominate the education news space.

Choice Media underwent a leadership change in which Tony Kinnett, in February 2022, replaced Robert Bowdon, and the group became Chalkboard Media, focusing not only on school choice issues and parents being able to use their education dollars for the education that best suits their children's needs, but also on broader aspects of education.

"It is crucial in this time of public education's decline, political chaos, and progressives' disastrous attempts at putting teachers, administrators, and parents in a stranglehold that we elevate the voices of all stakeholders in education—not just the chosen, left-leaning few," Kinnett said of the reasons behind the new partnership.

Kinnett spoke to The Post Millennial about what's going on in America's public education system, what parents need to know, and how to ensure better educational outcomes for American students.

It is no mistake, Kinnett said, that the American educational system in both public and private schools became the purview of the radical progressive left. While it wasn't some kind of conspiratorial plan to create an indoctrination machine for US students, it didn't have to be. The reason lies with teaching colleges and the programs that train teachers.

"Whether you're teaching in private school or public school," Kinnett said, "you most likely went to a teaching college. At any university, most of them being state or Ivy League institutions, these colleges have been run by the far left, basically since the cultural and sexual revolution in the 60s."

Every teacher teaching in the US comes through these schools. Kinnett cited Paulo Freire's Pedagogy of the Oppressed, published in English from the Portuguese in 1970, which discusses education through the lens of a power struggle and system of oppression, saying that ideas of this kind became embedded in every university department.

Students studying education take courses in every discipline, from psychology and sociology to data, analysis, history and English. Once every course of study is foundationally based in far-left ideology, it would be incredibly difficult for a teacher to not end up indoctrinated in that kind of thinking.

"We have all of these teachers that are coming out of these institutions, and in most of our states, in order to teach in a public or private school, you also have to have that state's teaching license.You also have to have that state's administration license and a special master's degree if you want to be a principal," he said. By the time teachers hit the classroom, they have already been steeped in anti-traditional ideas.

"That's why education is so far on the left. They're the only ones allowed to participate," Kinnett said.

"It sounds like a conspiracy theory," he said. "But they so openly admit it in every single university program. Half of my master's degree professors openly bragged about how basically they were gatekeeping education and academia. They saw only themselves as educated, only saw themselves as moral and compassionate. And that's why they castigate anyone and everyone who disagrees with them because they don't only see it as a threat to their legitimacy in the system, they also see it as a moral threat to what they believe is compassionate and then, therefore, their power. Because their power comes from moral authority. So whenever you watch a school board meeting, or like an education department meeting, they always speak in terms of what is value-centrically correct."

"Dewey talked about children needing to run the classroom," Kinnett explained, noting that Dewey was one of the authors of the Humanist Manifesto, which perpetrated the idea that "humans need to band together in this collectivist group, forsaking all individuality forsaking meritocracy, forsaking any kind of individualism and liberty in order to seek after this utopia that comes out of collective individuals following a centralized state."

For the purveyors of this ideology, "individually, people are selfish, and will always do what's best for them. They'll tend towards greediness, avarice and all of the other sins," so for them, "the solution to this is to take that power away and to treat individuals as this collective lump."

This, Kinnett said, is where much of the moral authority comes from for the progressive left. "Today," he said, "that's mostly taken the form of weird racism and gender ideological fallacies."

For years, he said, parents have simply trusted the system of education, assuming that administrators, teachers, and district officials were doing right by American students. It was primarily during the pandemic that parents began to take notice of what was going on in classrooms, as the classrooms came home in the form of remote and virtual learning.

Kinnett sees it as "more of an awakening, a reckoning not just on the actions of education, but also on the actions of American parents in general. For 30, 40, 50 years now, American education has been treated like the modern car, which doesn't need maintenance until the warning lights come on."

"And it devolved," he said, without anyone noticing, with the assumption that schools were doing what they were supposed to, "until finally everyone was locked in their houses during COVID and they were forced to open the hood of the car. And what they found on that engine was a mess. Parents found this colossal nightmare," Kinnett said.

"And so there is a little bit of guilt and shame on the part of parents for not catching this sooner," but even so, he said, "I think that American parents are really disgusted with the current culture, and with the lack of proper support for the family. And what you're going to see is a cultural shift in how the family operates, how parents see themselves in the cultural framework."

"What they choose to do with their children and how they choose to educate them will shape the next several generations of the United States," Kinnett said.

Those generations, too, will have some say in developing their own views, and shaping the US in their own way. And it's not at all clear that they are being influenced positively by the establishment educational institutions and the progressive push for their perspectives.

The main political weapon of the progressive left, Kinnett said, began its formation back in the 1990s, and it was essentially accusing your political and ideological opponents of being stupid. This approach has seriously begun to backfire among the younger generation.

"The funny thing is, they also want to say that they're the counterculture, but we're actually we're the rebels." That's starting to become clear, he said, in arts and culture and the reaction from the younger, post millennial generation.

The younger kids, unlike many of their millennial elders, can see through it. "They've watched their classmates go from being a totally normal person to suddenly declaring they're trans and basically having a mental episode in two weeks.

"You can't lie to a kid who's watching it with their own eyes. One of the most popular literary terminologies used in adults writing literature about children is children and 'looking on with disbelieving eyes'. You can't really fake it to kids that long.

"And so that's why Generation Z is really rejecting it. And I saw this when I was in classroom observing. I saw this teacher in his probably mid 30s, a big chubby guy with a big beard, telling his students that Booker T. Washington was this wimp because his Reconstruction suggestions were they didn't go far enough, weren't radical enough. And the students were just rolling their eyes, Latina and black students who do not care what this weirdo has to stay preaching about this because they know it's all performative, and it's garbage. And what he has to say is likely nonsense. I think generations z, and iAlpha behind them, are going to be pretty heavily, at the very least, libertarian," Kinnett said.

The progressive left, he said, is "losing the groups that they so desperately wanted to reach, because they couldn't help themselves from the absurd."

Chalkboard Media is a place for conservative and teachers who are not on the far left to write their views and news on education and policy. In many ways, it's the only place educators who are not touting progressive ideology can write.

There's also a deeper message, as teachers get slammed across the education sphere, Kinnett wants readers, and parents, to know that there are a lot of really great teachers. "We just need to get our kids in front of the good ones," he said.