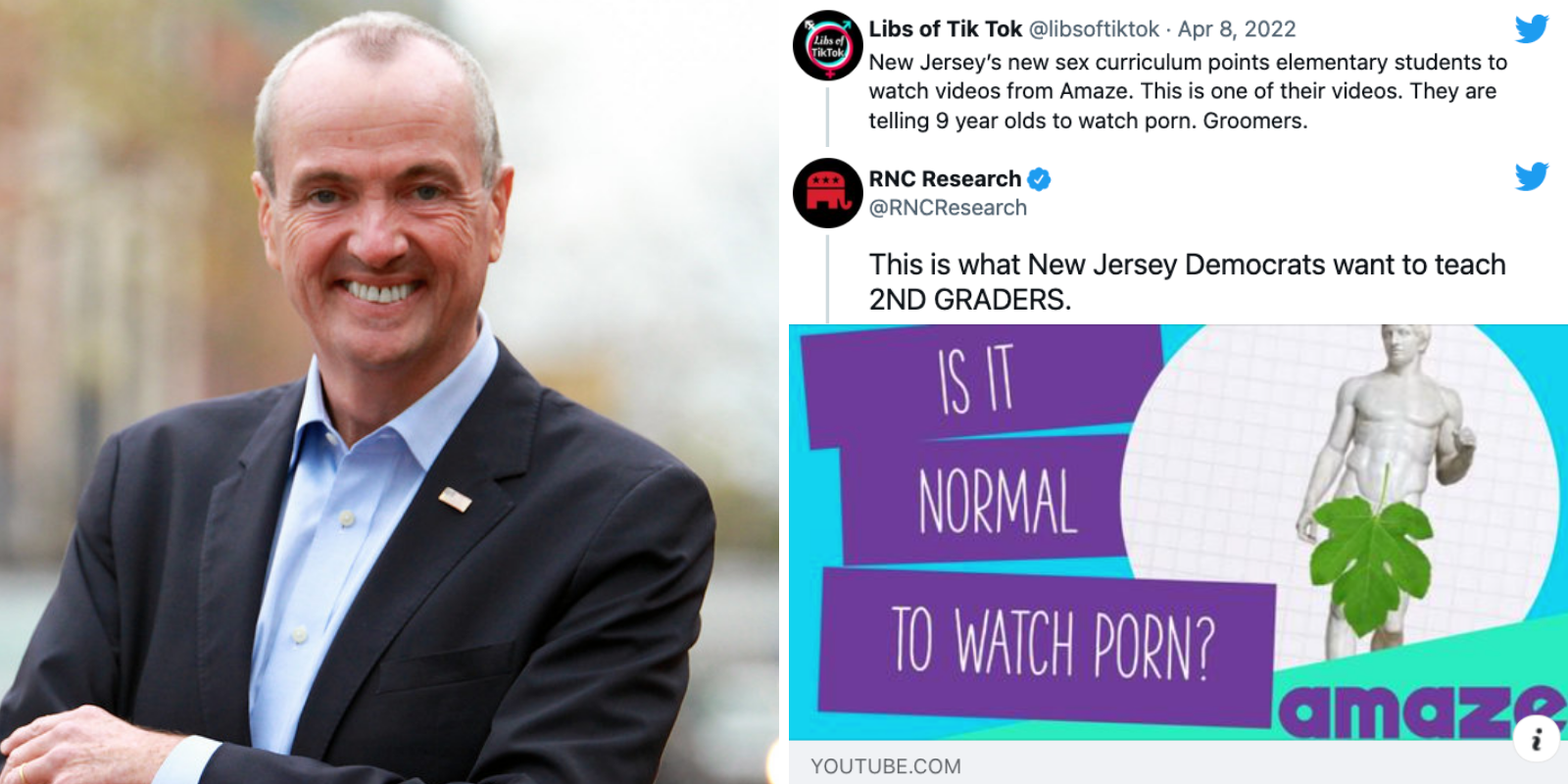 One portion of the lesson goes over the "pink" and "blue" gendered stereotypes, and asks students why this is, with the teacher being asked to explain: "All of what we just talked about — like deciding what colors or toys people can play with is part of something called  'gender.' That’s what we’re going to be talking about today."

Schepisi shared a link to to many examples of sex ed that will be taught to New Jersey students in the fall term, including those that direct teachers and students to videos from Amaze.org, which appears to intend to normalize pornography for consumption by minors.

Amaze.org does offer a video that states that pornography is not sex ed.

According to Fox News, these new teaching standards were established in 2020, but were not required to be enacted until September of 2022.

In another lesson plan for second graders, it states that "you will notice that this lesson refers to 'girls' and 'boys' when identifying body parts. The use of a binary construct of gender as well as using gender (boys and girls) rather than the more accurate biological sex (male and female) is purposeful given the developmental stage of students. Lessons in higher grades use more precise language and begin to introduce a broader concept of gender."

"This lesson does, however, acknowledge that 'there are some body parts that mostly just girls have and some parts that mostly just boys have. Being a boy or a girl doesn’t have to mean you have those parts, but for most people this is how their bodies are.' And, 'Most people have a vulva and a vagina or a penis and testicles but some people’s bodies can be different. Your body is exactly what is right for you,'" the lesson plan adds.

The lesson objectives hope for students to be able to name four male and four female body parts at the end of the teaching, and know why it is important to know the correct names for genitals.

Schepisi wrote on Facebook, "Although I voted against the legislation mandating certain sexual education classes for even the youngest of children I’ve taken a measured approach and have waited to further comment until I saw what was proposed."

"Today I reviewed all of the model school instruction materials and I truly think New Jersey has lost its damn mind," she added.

Schepisi posted the dropbox link with all the lesson plans, and said that while she agreed with some of the lesson contents, "many are completely overboard with cringy detail for young kids and some go so far as unnecessarily sexualizing children further."

The lessons plans were reportedly given to parents at the Westfield Board of Education's February 22 meeting, and appear to be reflective of the Garden State's new, broader sex education curriculum.

A spokesperson for Westfield Public Schools told Fox News that the teaching materials were not the school district's plans.

The school’s superintendent told Fox News that the materials presented to parents at the February Board of Education meeting were meant to be a "sample list of resources" aligned with state policy.

"During a presentation at the Feb. 22 Board of Education meeting, we provided an update on the district’s work to revise the Comprehensive Health and Physical Education curriculum," Superintendent Dr. Raymond González said.

"We made it clear at the meeting and subsequent meetings that these are resources only — they are not state-mandated — and that the district is in the process of developing its revised curriculum to meet state standards," the superintendent continued.

"The presentation included a sample list of resources aligned to the New Jersey Student Learning Standards to be considered as school districts work on revisions to the health and PE curriculum," the superintendent said.

The lesson plans and standards are opposite to Florida’s recently passed "Parental Rights in Education" bill, which prevents teaching of the subject matter to children in kindergarten through third grade.