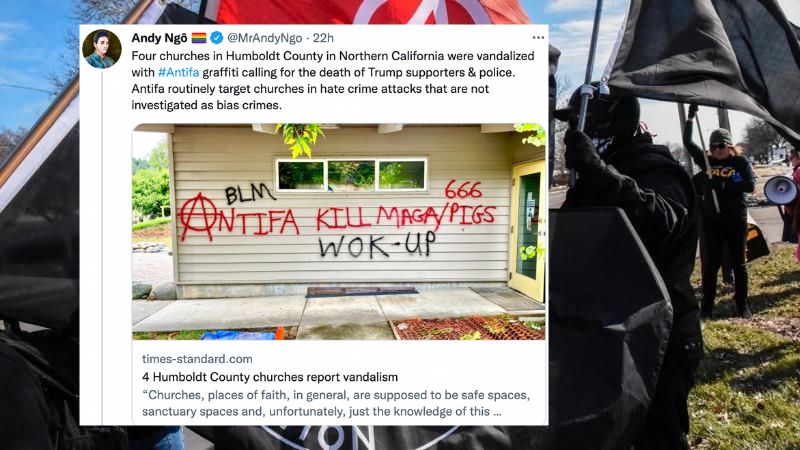 The Humboldt Unitarian Universalist Fellowship in Bayside, the Eureka Seventh Day Adventist Church, St. Mary’s Catholic Church in Arcata, and the First Covenant Church in Eureka, all located in Humboldt County — about 270 miles north of San Francisco — were all spray-painted with similar slogans, according to Times Standard.

According to one member of the Unitarian Universalist Fellowship, it's unlikely that it was radical leftists that vandalized his church, because the members support BLM.

"I immediately thought that someone had chosen to deface the building and attempt to make it appear that it was leftist radicals that had done it by writing BLM and Antifa," Chip Sharpe said. "It looked to me like they were trying to say, 'OK, this was put here by us antifa BLM nuts,' I don't think I would have believed that antifa or BLM, whatever that organization is, would have anything to do with it anyway."

Sharpe added that on Saturdays, church members wave BLM signs and a church banner on the corner of a local intersection.

To Bridgette Garuti, the congregational administrator of the Unitarian church, the message left by the unknown culprit[s] is confusing.

"It doesn’t even make sense what they wrote, quite honestly, it's quite confusing. But it's been identified that it was the same kind of confusing message on each one of the four [churches] in that same timeframe," she said, noting that antisemitic flyers were found in local people's driveways the week prior as well.

"Finding contractors to give an estimate and actually do the work is months out," Garuti added. "Right now, we just stapled a tarp over it so it’s not in everybody’s face."

According to the sheriff’s office, the cases are being investigated as misdemeanors, but vandalism can be considered a felony if the damage amounts to over $400. Misdemeanor offenders can be fined up to $10,000 or spend up to 364 days in a county jail, whereas a felony conviction could increase prison time to three years and a fine of up to $10,000.

"Churches, places of faith, in general, are supposed to be safe spaces, sanctuary spaces and, unfortunately, just the knowledge of this happening, is creating a ripple, an undercurrent of people not feeling safe," Garuti said.

According to journalist Andy Ngo, church vandalizations in the Northwestern region of the US are not uncommon.
"Antifa routinely target churches in hate crime attacks that are not investigated as bias crimes," he said, sharing evidence of other recent examples in the neighboring state of Oregon.

In November of 2020, Jarrod Deferrari, a trans activist and Portland Antifa member was suspected of smashing the windows on a Catholic church. According to Ngo, the suspect was released and then "went on to commit armed robbery in another county," leading to conviction and prison time.

Just this past June, another incident occurred in which Antifa organized an attack on a Christian pregnancy center, in which more property was damaged and a female videographer was assaulted. This led to no arrests, according to Ngo.