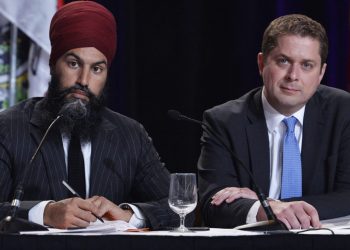 “Trudeau may never face a court of law for his role in this scandal, but he will have to face the Canadian people over the next few weeks,” said Conservative leader Andrew Scheer of the imbroglio that engulfed the government after The Globe and Mail broke the story in February.

“Let’s remember, on the day that this story first broke, Justin Trudeau denied it completely. He said that the story was false. He then said that he never pressured Jody Wilson-Raybould.”

Shortly after Scheer’s remarks, Trudeau faced the media in Niagara-on-the-Lake, Ontario, where he expressed disagreement with much of Ethics Commissioner Mario Dion’s report, yet takes “full responsibility” for his actions that ultimately lead Dion to conclude the PM broke the law.

“Taking responsibility means recognizing that what we did over the last year wasn’t good enough, but at the same time I cannot apologize for standing up for Canadian jobs, because that’s what Canadians expect us to do,” said Trudeau.

The charges and Trudeau’s repeated attempts to convince Wilson-Raybould to divert criminal proceedings against SNC-Lavalin, sparked a scandal the PM continues to weather during his government.

Dion’s report finds that the actions of Trudeau and other high-level players including Finance Minister Bill Morneau and ex-Privy Council Clerk Michael Wernick breached section 9 of the Conflict of Interest Act, which prohibits public office holders from using their position to further a third party’s interests.

The Ethics Commissioner stops short of ascribing culpability to any other actor in the saga, placing responsibility solely in at the feet of the prime minister who directed the nearly four-month effort to get Wilson-Raybould to change her mind.

New Democrat leader Jagmeet Singh called the situation “absolutely outrageous” and that Trudeau “cannot be the prime minister of Canada.”

“Prime Minister Trudeau violated the trust of Canadians to further the interests of his corporate friends,” said Singh. “This report proves that the Liberal government has put the wealthy and the well-connected above the law – and the Prime Minister himself is directly responsible.”

Based on SNC-Lavalin’s intense lobbying of Trudeau government a year after charges were laid against the firm, and barely four months after the Liberals’ majority election win in October of 2015, Singh said that kind of activity should be outlawed in the future.

“If a corporation is faced with a criminal charge, they (should be) no longer able to meet with the government on that matter,” said Singh.

The deferred prosecution provision that Wilson-Raybould refused to offer SNC-Lavalin was included in the March 2018 omnibus budget bill.