According to the transcript, Telford said that “if Jody is nervous, we would of course line up all kinds of people to write op eds saying that what she’s doing is proper.” 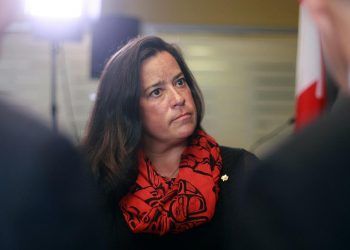 During Jody Wilson-Raybould’s bombshell testimony on political interference in the SNC-Lavalin case, the former Justice Minister implied that the prime minister’s chief of staff, Katie Telford, said that she would have positive “op eds” written about Wilson-Raybould if she would make the right decision.

In her statements before the Justice Committee, Wilson-Raybould claimed that there was a persistent effort from the Prime Minister’s Office and others to intervene in her decision to criminally prosecute SNC-Lavalin.

According to the transcript, Telford said that “if Jody is nervous, we would of course line up all kinds of people to write op eds saying that what she’s doing is proper.”

“We don’t want to debate legalities anymore. We aren’t lawyers, but there has to be some solution here,” allegedly said Katie Telford.

The conversation also further implicated Gerald Butts, who has since resigned as the prime minister’s Principal Secretary.

In the conversation, Gerald Butts was quoted as allegedly saying: “Jess [Wilson-Raybould’s Chief of Staff], there is no solution here that does not involve some interference.”