Police: Pro-Biden/Harris driver may be at fault for 'Trump train' accident

The white SUV appears to have intentionally swerved directly into a Trump supporter's vehicle. 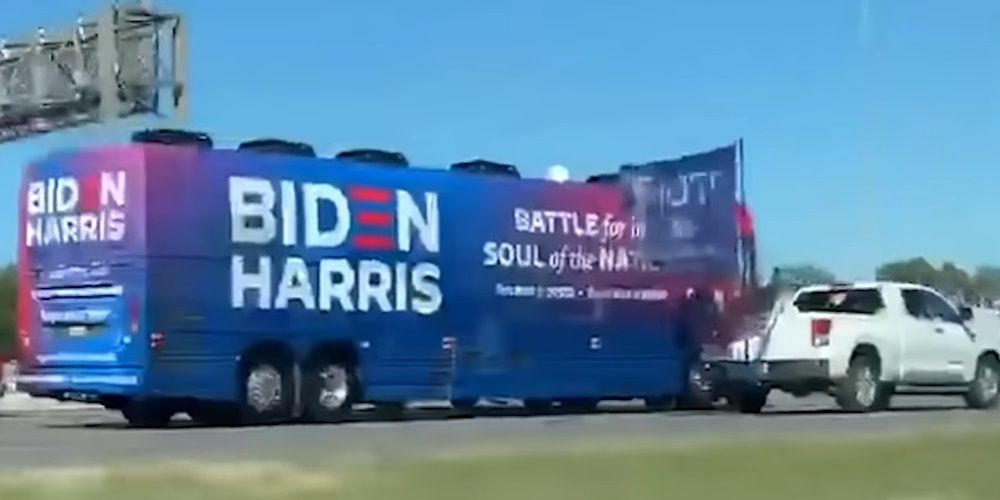 Democrats and the media erupted with rage over the weekend after a video showing a Biden/Harris campaign bus in Texas was being followed by a number of vehicles sporting Trump flags.

Media personalities were quick to condemn the incident, with The New York Times claiming that the Trump supporters tried to force the vehicle off the road, citing "social media posts from witnesses and accounts by party activists." CNN anchor Jake Tapper commented on the incident affirming that the Trump supporters were trying to put the Biden campaigners "in harm's way."

A number of Democratic Party operatives such as Katie Naranjo, chair of the Travis County Democratic Party, suggested that this was an attempt to "intimidate Biden supporters."

President Donald Trump was quick to offer support to his voters, tweeting a video of the incident alongside the caption "I LOVE TEXAS!" After the FBI announced that it would be investigating the incident, the President once again tweeted about the incident, calling his supporters "patriots."

The remarks were quickly denounced by the Biden campaign as an attempt to intimidate them.

New evidence suggests, however, that the opposite is true, with local police stating that the "at-fault vehicle may be the white SUV and the victim appears to be the black truck,” according to WFLA-TV, an NBC affiliate in Florida. The white SUV belonged to a Biden campaign staffer who was travelling behind the campaign bus.

The Democratic Party has not yet responded to the statements by the police.