A letter from Archbishop Christophe Pierre, the Apostolic Nuncio to the United States on Dec. 13, and obtained by Catholic News Agency, said that there was "no possibility of appeal" for Pavone. 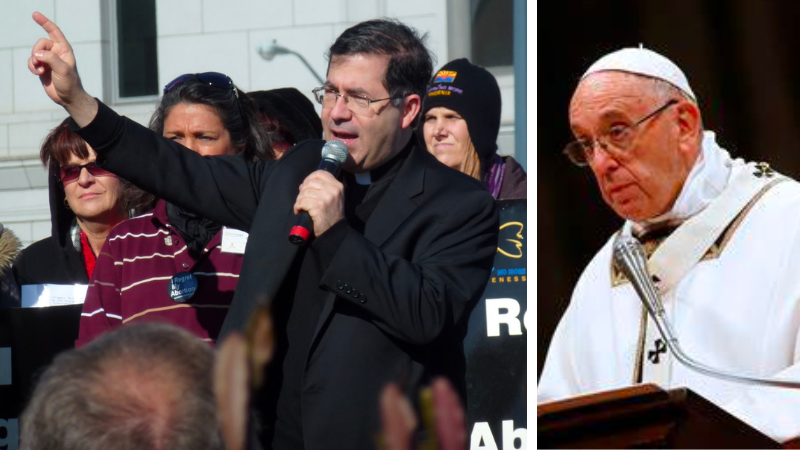 Libby Emmons Brooklyn NY
Dec 18, 2022 minute read
ADVERTISEMENT
ADVERTISEMENT
Father Frank Pavone has been dismissed from the Catholic priesthood over what the Vatican has called "blasphemous communications on social media" and persistent disobedience of the lawful instructions of his diocesan bishop."

Pavone has been a full-throated supporter of Donald Trump, and is unforgiving on his pro-life stance as the national director of Priests for Life. No clear reason other than "blasphemy" has been given, and what comprises the basis for that accusation has also not been revealed.

A letter from Archbishop Christophe Pierre, the Apostolic Nuncio to the United States on Dec. 13, and obtained by Catholic News Agency, said that there was "no possibility of appeal" for Pavone.

"Father Pavone was given ample opportunity to defend himself in the canonical proceedings, and he was also given multiple opportunities to submit himself to the authority of his diocesan bishop," read a statement attached to the letter. "It was determined that Father Pavone had no reasonable justification for his actions."

Pavone said that he wasn't notified as to this judgement by the Vatican. When CNA reached out to Pavone, he said "How did CNA learn about this before I did?" And noted that the CNA contact was "the very first communication that came to me about this."

"The blasphemy is that this holy priest is canceled while an evil president promotes the denial of truth & the murder of the unborn at every turn, Vatican officials promote immorality & denial of the deposit of faith & priests promote gender confusion devastating lives…evil," said Bishhop J Strickland of the Diocese of Tyler in Texas.

Pavone is still undertaking his sacred duties as a priest, saying Mass, and the Priests for Life, based in Titusville, Florida, within the Diocese of Orlando, attests that Pavone "is a Catholic priest in good standing, and exercises his ministry in full communion with the Catholic Church."

"It is not clear in what diocese Pavone, 63, is incardinated as a priest," CNA reports. He was ordained in 1988, and has been the national director of Priests for Life since 1993.

Pavone has written about his clashes with church hierarchy, and has blamed much of that on his strident pro-life activism. He wrote: "if they oppose priests like me, it’s because they’re opposing you and the commitment you have to this cause. Cancel culture is alive and well in the Catholic Church. I’ve experienced it firsthand. And the more we are aware of it, the better we will be able to defend ourselves and others from it."

The Catholic Church has been veering headlong into the realm of social justice activism, with some parish priests calling for "anti-racism" in their homilies, while others embrace the concept of "trans kids."
ADVERTISEMENT
ADVERTISEMENT
pavone francis