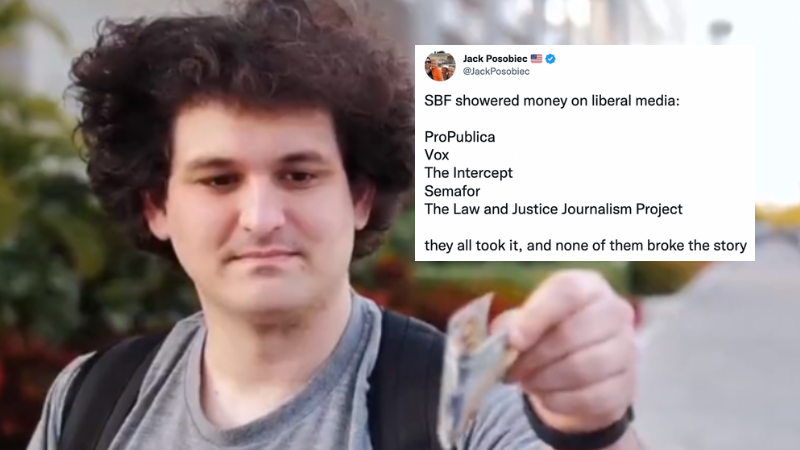 Libby Emmons Brooklyn NY
Nov 23, 2022 minute read
ADVERTISEMENT
ADVERTISEMENT
In addition to being a major donor to the Democrat Party during the 2021-22 election season, disgraced FTX founder Sam Bankman-Fried was a major donor to several liberal media outlets, including ProPublica, Vox, The Intercept, The Law and Justice Journalism Project, and the recently launched Semafor, leading to speculation about their ability to objectively report on FTX.


As Semafor launched in October, Reuters reported that "The platform said it has so far raised $25 million from investors including David Bradley, owner of The Atlantic magazine; Jessica Lessin, founder of technology website Information; and cryptocurrency exchange FTX founder Sam Bankman-Fried."

That was only a few short weeks before FTX collapsed. Customers made a run on the exchange to withdraw their deposits, only to find that the company did not actually have it. FTX is now in Chapter 11 bankruptcy proceedings in the state of Delaware, and Semafor is out a whole bunch of money. After Semafor published an article about disgraced FTX founder Sam Bankman-Fried's relationship with Elon Musk, indicating that despite Musk's claim that his "bullshit meter was redlining," Musk pointed out that their reporting was perhaps not entirely on the up-and-up where FTX was concerned.

"Semafor is owned by SBF," Musk wrote to Semafor on Twitter. "This is a massive conflict of interest in your reporting. Journalistic integrity is [trash]."

This was in response to Semafor suggesting that readers should follow them on alternate social media platforms, snarkily saying for "No reason in particular," indicating that this way Twitter users could hedge their bets against a Twitter collapse under Musk's leadership.

Semafor noted that Bankman-Fried had a stake in Twitter, and also in Semafor.

Musk asked Semafor's founder Ben Smith "what's going on here?" in response to the revelations about funding from the Bankman-Fried foundation.

In reply, Smith said "Like you and many others, we took an investment from him," noting that they have disclosed this when they report on the beleaguered former CEO, or FTX.

Ian Miles Cheong brought into question Semafor's reporting on the AP reporter who was fired after falsely claiming that Russian missiles had struck Poland, which could easily have been an Archduke Ferdinand-style event that could have launched a nuclear World War 3, as well as their soft coverage on teacher's union president Randi Weingarten, and attacks on conservatives.

Vox notes that in 2022, their Future Perfect project "received a grant from Building a Stronger Future, a family foundation run by Sam and Gabe Bankman-Fried, to support a project on technological and innovation bottlenecks that hamper human progress." They go on to say that "This project is now paused."

"Over three years," ProPublica writes, "the donation will support investigations into ongoing questions about the COVID-19 pandemic, biosecurity and public health preparedness. The grant will allow ProPublica to establish a world-class reporting team for wide-ranging, international coverage of the COVID-19 pandemic and any future outbreaks. This reporting will center on a larger accountability question: Is the world taking the steps needed to contain this pandemic and prepare for the next global health threat?"

The Building a Stronger Future Foundation was part of Bankman-Fried's "effective altruism" project, where he felt his job was to get rich in order to give money away. This foundation was particularly about funding future pandemic prevention, and was run by his brother.

Reason reports that "The Intercept, which at the time of FTX's fall had already received $500,000 and was due to get the rest in the coming years. Acting editor-in-chief Ryan Hodge notes that SBF's bankruptcy will leave The Intercept with a significant hole in its budget."

The Law and Justice Journalism Project also took funds from Bankman-Fried, with Building a Stronger Future listed as a philanthropy that has supported the work of the international affairs podcast "over the past year."
ADVERTISEMENT
ADVERTISEMENT
sbf ftx media