"The number one woman who finished was from Sarasota. She won the silver medal. She's been an absolute superstar, her whole career," DeSantis said of Emma Weyant. 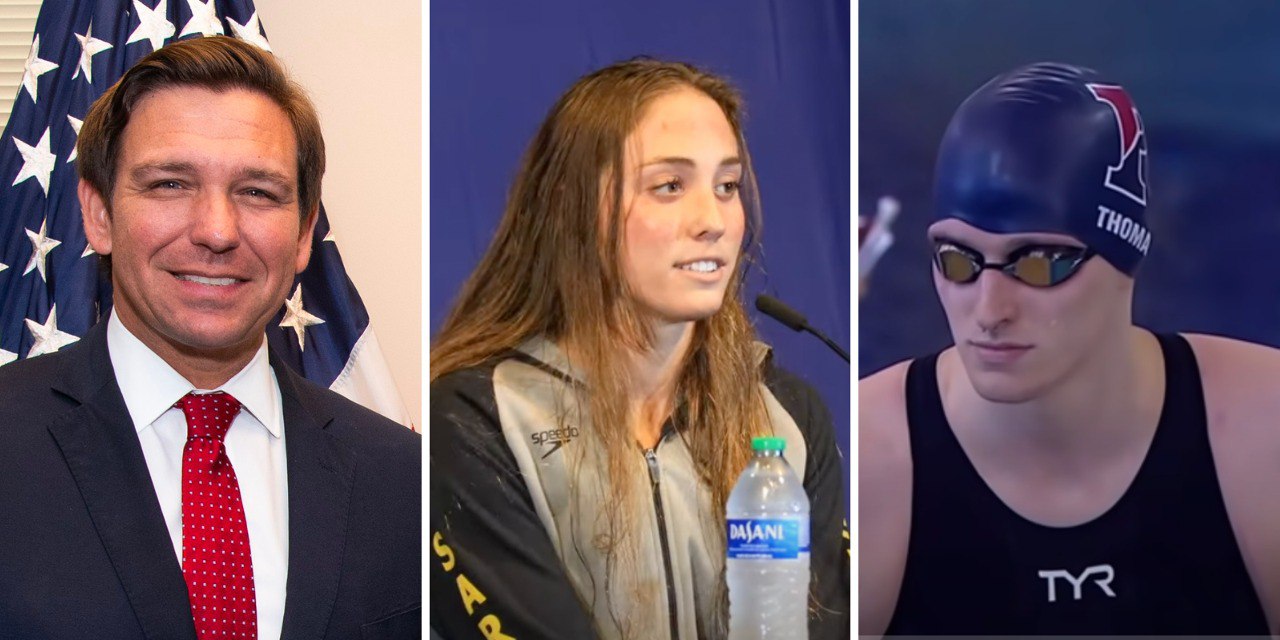 On Tuesday, Florida Governor Ron DeSantis slammed the NCAA for allowing biological male swimmer Lia Thomas to compete against women, and proclaimed that the second place finisher, Sarasota Olympian Emma Weyant, was the true winner of the 500 yard freestyle race.

"If you look at what the NCAA has done, by allowing basically men to compete in women's athletics. In this case, the swimming you had, the number one woman who finished was from Sarasota. She won the silver medal. She's been an absolute superstar, her whole career. She trains, I mean, to compete at that level is very, very difficult. And you don't just roll out of bed and do it. That takes grit, that takes determination. And she's been an absolute superstar and she had the fastest time, of any woman in college athletics," DeSantis said.

"Now the NCAA is basically taking efforts to destroy women's athletics. They're trying to undermine the integrity of the competition and they're crowning somebody else, the woman's champion and we think that's wrong. And so this is a Floridian who I think deserves to be recognized," he added.

DeSantis continued on to proclaim that Emma Weyant is the best female swimmer in the 500 freestyle, and slam the NCAA for allowing Lia Thomas to compete.

"We’re doing a proclamation, saying that Emma is the best female swimmer in the 500 freestyle because she earned that and we need to stop allowing or organizations like the NCAA to perpetuate frauds on the public. And that's exactly what they're doing. They are putting ideology ahead of opportunity for women athletes," he said.

"So we'll be issuing that proclamation just because, you know, as somebody that was such a great athlete in Florida has now moved on to the University of Virginia. You know, we need to honor that appropriately. And if the NCAA was willing to actually ensure the integrity of women's competition, she would've been crowned national champion," he added.

DeSantis released an official proclamation on Tuesday, stating that Weyant is the official winner of the NCAA race.

The proclamation notes a number of achievements Weyant has won, including an Olympic medal in 2021 for the 400 meter individual medley.

The document stated that "a male identifying as a woman was allowed to compete in and was declared the winner of the race by the National Collegiate Athletic Association and Emma was determined to have come in second place."

DeSantis noted in both the proclamation and his speech that the Fairness in Women’s Sports Act he signed last year was created to "preserve fair opportunities for female athletes to demonstrate their strength, skills, and abilities in athletic competition," and that the bill bans biological males from competing on women’s sports teams.

"Women have fought for decades to have equal opportunities in athletics, and it is wrong to allow ideology to erode these opportunities as is happening in other states, and the preservation of women-specific athletic teams or sports is necessary to promote quality of athletic opportunities," the proclamation states.

"Florida rejects the NCAA’s efforts to destroy women’s athletics, disapproves of the NCAA elevating ideology over biology, and takes offense at the NCAA trying to make others complicit in a lie."