Sanders campaign adds another anti-Semite to their staff

Bernie Sanders’ campaign rife with left-wing radical volunteers, and here’s yet another one on the team. 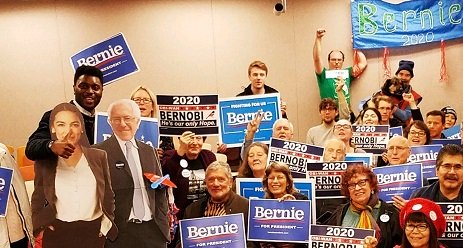 This past week, the The Seattle Times ran an article announcing that the Bernie Sanders campaign had hired former Seattle City Council candidate Shaun Scott as their Washington State Field Director. The article links to, but does not discuss, Scott’s positions on Seattle’s issues. To say that Scott is an extreme socialist would be an understatement. Scott has been very vocal about taxing everyone from businesses to people who drive to work everyday, opening heroin injection sites in Seattle, and eliminating the Police Department among other proposals. He ran on a slate with other socialist candidates Kshama Sawant and Tammy Morales.

While all this is concerning, what is even more concerning to me is that the Seattle Times article failed to mention that the Sanders campaign has brought into the fold another anti-Semite.

Shawn Scott has a history of hatred of the Jewish state and alliances with anti-Semitic organizations. In his endorsement questionnaire for the Seattle Democratic Socialists of America (DSA) Scott was asked, “Do you support the Boycott, Divest, Sanctions, (BDS) Movement?” One could ask why this question is on an endorsement for Seattle City Council which has no control over foreign policy, but I believe it goes to the heart of the ideology of the DSA.

According to a report by stopantisemitism.org entitled “The New Anti Semites” there are “unprecedented similarities between the BDS movement and far-right groups to propagate anti-Semitism in the United States.” The report goes on to say, “Much of this hatred is often disguised under the veil of the delegitimization campaign against the Jewish State of Israel.” The report details that the BDS movement “directly drives anti-Semitism and radicalizes public discourse in Western democracies,” and documents over 100 examples in the United States and around the world. BDS co-founder Omar Barghouti, has said publicly that he’s working for Israel’s “euthanasia.” Hatem Bazian—the other major co-founder of BDS in America—has called for an armed struggle, an “intifada,” against the United States and spouted anti-Semitic stereotypes.

Scott answered the DSA question by saying that he “Wholly and unequivocally” supports the BDS movement and added a well-known anti-Semitic trope: “BDS is the least we can do to support the Palestinian people currently suffering under the apartheid state of Israel.” More concerning is that Scott, even with his public comments, was still endorsed by mainstream Democrat organizations.

Scott has worked with and supports Jewish Voice for Peace-Seattle (JVP) JVP is against the existence of the State of Israel and even hosted Rasmeah Odeh, a Palestinian woman convicted in a 1969 terror attack that killed two. According to the Anti Defamation League (ADL) “Jewish Voice for Peace is a radical anti-Israel activist group that advocates for a complete economic, cultural and academic boycott of the state of Israel. JVP considers supporters of Israel, or even critics of Israel who do not hew to JVP’s own extreme views, to be complicit in Israel’s purported acts of racist oppression of Palestinians. JVP leaders believe that expressing support for Israel, or not challenging mainstream Jewish organizations that support Israel, must also be viewed as an implicit attack on people of color and all marginalized groups in the United States. JVP’s energetic proselytizing of this view–especially among other social justice groups–has created a hostile environment for many progressive Jews. In a sense, JVP is extending its boycott agenda to include not just Israel but its American supporters as well.” The full ADL report on JVP including JVP’s attacks on liberal and progressive Jews can be viewed here.

The Sanders campaign has been dogged by accusations of surrounding itself with anti-Semites over the past year. The Sanders Campaign named Linda Sarsour as an “Official Surrogate” for the campaign. Sarsour, was ousted from the Women’s March for a history of anti-Semitic comments including: “Israel was built on the idea that Jews are supreme to everybody else.”

“How can you be against white supremacy in the United States of America and the idea of living in a supremacist state based on race and class, but then you support a state like Israel that is built on supremacy?”

Sarsour has been a supporter of rabid anti-Semite Louis Farrakhan and also supported terrorists like Rasmea Odeh. Sarsour has parroted anti-Semitic accusations of “dual loyalty” of Jews whenever she is called out on her comments and actions. In a time of rising anti-Semitic attacks across the country, with Jewish institutions begging for more police protection, like Scott, Sarsour is anti-police and even went so far as to praise cop killer Assata Shakur.

Sanders has frequently appeared with and accepted endorsements of Reps. Ilhan Omar and Rashida Talib. Both, have well documented histories of anti-Semitic and anti Israel statements.

As a Jew, I always thought if there would be a Jewish candidate for President, they would represent traditional Jewish values. It is clear to me that the Sanders campaign and Shaun Scott do not represent those values and instead ally themselves with enemies of the Jews.

Ari Hoffman is the vice president of Congregation Bikur Cholim Machzikay Hadath in Seattle and a former candidate for Seattle City Council. He has been featured on 60 Minutes with Anderson Cooper, Fox and Friends, The Dr. Drew Show and The Glen Beck Program.